Pakistan Is Cracking Down on Uyghur Muslims Who Fled China 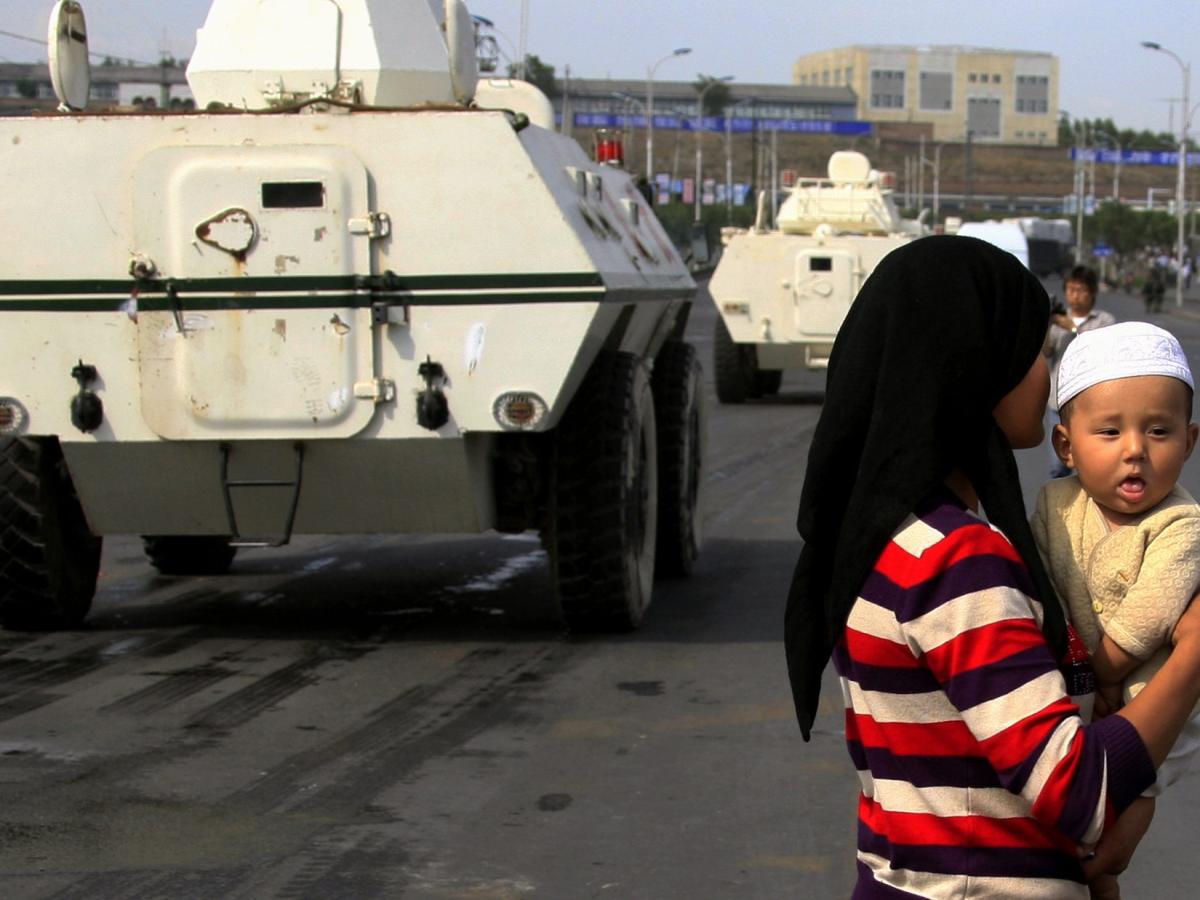 Umer Mohammed Khan enters a nondescript concrete building near Islamabad through metal sliding doors and steps inside a dimly lit corridor that leads to a winding staircase. He jogs up three floors to the rooftop level and opens a wooden door. Inside the dark room a family of seven sit huddled together speaking in hushed tones. A bearded father, Niaz Ghafoor, sits by his young daughters, one five and the other two. Ghafoor’s wife sits with their three sons, two teenagers and one five-year-old boy. They are Uyghurs, a Muslim Turkic minority group from China, who fled the country to avoid Chinese uyghur persecution. They are in hiding, in a secret location.

“My in-laws and my wife’s relatives are missing. My daughters are missing. I worry all the time. I don’t know if they are still alive,” said Ghafoor, a Uyghur scholar.

China is at war with the Uyghurs. The Chinese government has imprisoned an estimated one million Uyghurs in detention camps, demolished mosques, schools and cemeteries, and has separated young children from parents all in an effort to erase the Uyghur culture. There are reports that in these so-called “re-education” camps, women are systematically raped and abused. In February this year, US Secretary of State Antony Blinken formally called China’s persecution of the Uyghurs genocide. China restricts access to Xinjiang and access to the camps themselves is non-existent. As such, verifying detainees’ widespread and detailed accounts of abuse is practically impossible. China officially denies allegations of abuse in the camps in Xinjiang.

Khan is a school teacher turned activist who, under enormous risk to himself and his family, is running an underground railroad allowing Uyghurs like Ghafoor to escape China. In the past decade he has helped dozens of families flee this persecution. “If I don’t help them, who will?” he said. “I have helped many Uyghur families resolve their issues and God willing, I will keep doing this in the future.” But the situation in Pakistan has rapidly deteriorated. Pakistan is no longer a safe haven for this Muslim minority group. Under pressure from the Chinese government, Pakistan’s police are now deporting Uyghurs back to China, and an uncertain future.

Pakistani authorities are under huge pressure from China owing to CPEC, the China Pakistan Economic Corridor, a $62 billion (about £44 billion) economic project consisting of multiple loans from China to be used for infrastructure, power plants, telecommunications, and schools. CPEC is the flagship project of the $8 trillion One Belt One Road (OBOR) initiative, an ambitious re-imagining of the historical silk road trade networks connecting China to the rest of Asia, the Middle East, Europe, and Africa. Even though Pakistan is the only country in the world created as a Muslim nation, the promise of Chinese money seemingly overpowers the desires to stop what is happening to Uyghur Muslims. “The Pakistani government will do anything China orders them to do. Uyghurs are suffering so much because of CPEC,” said Ghafoor.

Speaking in 2019, Pakistan’s Prime Minister Imran Khan said he wasn’t familiar with the Uyghurs’ situation, although he did describe China as a “breath of fresh air” for Pakistan. This week the two countries are marking 70 years since establishing diplomatic relations.

Many Pakistanis like Mushahid Hussain, founder of the China-Pakistan Institute, agree with Imran Khan and see CPEC as an enormous economic win for Pakistan. Hussain sees China as a trustworthy partner. “I say we don’t have a relationship with China, we have a romance with China! We talk of our relationship as being higher than the mountains, deeper than the oceans, sweeter than honey, and stronger than steel. There is first off all an inexorable shift in power from the west to the east in what is termed the Asia century.” And he sees CPEC as the start of this shift. But some critics fear CPEC is “debt trap diplomacy” from China, or in other words Pakistan is given a loan China knows it can never repay.

Due to CPEC, Ghafoor fears that he and his family are not safe in Pakistan. The Pakistani authorities have threatened to send him and his family back to China where they will be separated and where Ghafoor, his wife and teenage sons will be sent to the camps. “If I return to China with my family, God knows if we would survive,” said Ghafoor. Umer Khan is trying to find them a safe haven in another country like Turkey or even Afghanistan. But China has made the immigration process nearly impossible for Uyghurs with Chinese passports, by confiscating or not renewing their travel documents. Khan is pleading with the UN for help. Pakistani authorities have also begun collecting bio metric data on all Uyghurs living in Pakistan. Khan holds up a document handed out to households in Islamabad – the questionnaire asks about religious affiliation and family history. “For us this is more dangerous than bullets or bombs. They want to see how many ‘real Uyghurs’ are present and can be removed from Pakistan,” he said.

Lijian Zhao, Deputy Chief of Mission at the Chinese Embassy in Islamabad, believes Khan and other Uyghurs in Pakistan are part of the East Turkestan Islamic Movement (ETIM), a separatist group responsible for several violent attacks inside China like the 2005 attack in Urumqi, in Xinjiang region. An explosion set off by ETIM killed 140 people and left hundreds more wounded. Zhao, who was recently promoted to Director of the Chinese Ministry of Foreign Affairs Information Department in Beijing, said, “The East Turkestan Islamic Movement is a terrorist organisation recognised by the UN security council. Their main agenda is to separate Xinjiang from China.

“We are trying to get the support of other countries to fight this group. I think ETIM’s attempt to separate China, to create trouble for China, is doomed to failure.”

In 2015 under Chinese pressure, Pakistani police broke into Khan’s Uyghur language school in Islamabad and destroyed thousands of dollars’ worth of computers, textbooks, and other teaching material. “I am no terrorist, but yes, China says I am a terrorist,” said Khan. “I have done nothing wrong. I am merely trying to help educate people. Because China fears us, they suppress us.” Before Khan’s school was destroyed, it was flourishing. “I had around 100 children at the school learning the Uyghur language. There is no existence without your mother tongue and culture. We are facing an existential crisis and we want to reclaim our identity,” said Khan.

That same year police entered Khan’s home looking for him. He was out at the time so they grabbed his elderly father instead. They shoved him to the ground and beat him, Khan said. His father died shortly after, the trauma of this event a contributor to his death, according to Khan. Since this incident Khan has been arrested and beaten numerous times by Pakistani authorities, he said. He has scars on his wrists and chest that he says are the result of the beatings. Khan begins to cry as he remembers this incident. “My family members came to me and begged me to stop this work. But I cannot. Helping people is my life’s calling and I must continue.”

Khan is not alone in his fight against China. Baloch nationalists in Baluchistan, a region in the southwest of Pakistan bordering Iran, have been fighting for independence from Pakistan since 1948. Thousands of Baloch have been forcibly disappeared at the hands of the Pakistani government. According to Voice for Baloch Missing Persons, more than 6,000 people are still missing from Baluchistan and are presumed to be dead. Now as a result of CPEC, China is taking over the Gwadar port in Baluchistan to use as a naval base with plans to transform Gwadar into a Dubai style economic free zone. The citizens of Baluchistan are locked out of these new developments. The Balochistan Liberation Army (BLA), a separatist group fighting for independence from Pakistan, pulled off a series of violent attacks against CPEC-linked targets in the last few years. In 2017 the BLA attacked a five-star hotel in Gwadar, a base for Pakistani politicians, military personnel, and Chinese businessmen, killing five people. In 2018 the BLA brazenly attacked the Chinese Consulate in Karachi killing seven. “China’s military expansionist designs in the world are an open secret,” said Kohyar Baloch, Commander of the BLA. “In our opinion, the One Belt One Road project is solely to strengthen China’s military hegemony in the region. We will resist and target Chinese and Pakistani interests in the region. Our attacks will be more intensified in the near future.”

Two Pakistani police died protecting the Chinese Consulate in Karachi from the BLA attack in 2018. Police officer Suhai Aziz Talpur led an hours-long fight to defend the consulate. A month later Aslam Baloch, a senior leader of BLA and mastermind of the attack, was killed in Kandahar. “I think the China-Pakistan relationship has been further cemented by this incident,” said Zhao. “We appreciate the braveness of the Pakistani law enforcement agencies. The police who lost their lives will be rewarded in heaven while the terrorists will be burning in Hell.”

The Taliban and ISIS have also played a role in kidnapping and killing Chinese immigrants in Pakistan. Two Chinese teachers were kidnapped and later killed in Baluchistan by the Islamic State in 2017. On April 21st, the Pakistan Taliban, Tehreek e-Taliban (TTP), detonated a van packed with explosives at the Serena Hotel in Quetta, Pakistan. The explosion killed five people, including a police officer and a hotel security guard, and wounded 12 others. Chinese Ambassador Nong Rong was the intended target, though Rong narrowly avoided the attack. At the Red Mosque in Islamabad, a training ground for the Taliban, Muhammad Abdul Azia, Imam of the mosque, said, “We want to have a good relationship with China. But if they think they can take us by force, they must be insane. And the abuse of Uyghurs in China must end,” he said.

In the last few months CPEC projects have begun to ramp up again. As a result, Pakistani authorities have recently increased their surveillance and harassment of Khan and his family. While Khan vows to continue to fight for Uyghur rights and continue to help persecuted Uyghur families in Pakistan like Ghafoor’s, at the moment Khan has been forced to go into hiding.

“We are afraid that Pakistan will become a Chinese colony in the end. China will say ‘CPEC belongs to us’,” said Khan. “They either want to kill us or make future generations good for nothing and they are gradually achieving that goal.”