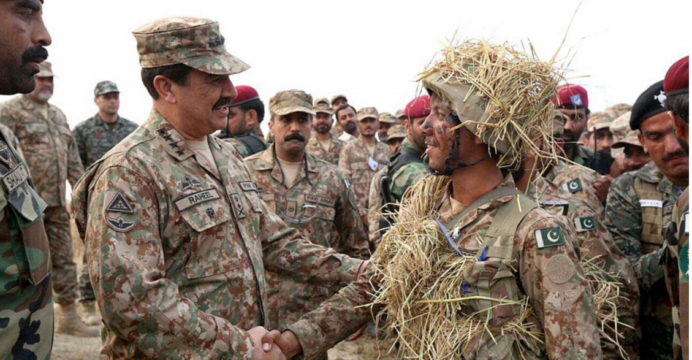 The Pakistan Army Training ground still bears the signs of the stampeding horses of invaders, the hills echo with the battle cries of the brave warriors of the past. A region that bears testimony and resounds with the rich history of the past, the marauders who came to acquire wealth, the Muslim conquerors who came to spread the faith in this region, architectural wonders now in ruins silently proclaim to the world tales of a glory long lost. The region, now comprising Pakistan, is replete with stories of wars, battles, feuds and various revolutionary and military endeavours.

The sub-continent was partitioned into two distinct states due to unbridgeable ideological differences between the Hindus and Muslims, hence Pakistan came into being in August 1947 with the efforts of Quaid-e-Azam Muhammad Ali Jinnah, the founding father of the Nation. Presently, the ninth most populous country in the world, Pakistan covers an area of 800,000 square kilometers, surrounded by Arabian Sea, Iran, Afghanistan, Soviet Union, China and India. Pakistan is a country that enjoys diverse sub-cultures, resultant of being host to major historical events and influences of various civilizations. Similarly, it is a land that harbours diverse environmental facets within itself, from deserts to glaciated ice, to rich forests, fertile plains, rivers, lakes etc; a region that is bestowed with the best that nature has to offer.

The Pakistan Army at its inception presented a dismal picture as it was disinherited in its legitimate share of military assets in an effort to starve it to inadequacy and vulnerable to subjugation.

An institution that plays a major role and is at the forefront of all national and international endeavours to restore peace wherever a human conflict or natural calamity arises. The men of the Pakistan Army truly reflect the warrior spirit, weilding weapons for peace, doing justice to the strong military legacy handed down through time by their ancestors. These are the men who while adhering to the traditional spirit acquire training on modern methods conforming to international standards, at the same time setting standards of their own, which have achieved worldwide acclaim.

These men of the Pakistan Army are adept at the art of warfare, their inborn skills have been honed at the various institutions of Military Training throughout the country. Steeped in rich traditions, many of these institutions date back to the 19th Century. Institutions that exude an aura of strong military values, imparting skills through competent instructors, who having acquired training within the country and abroad, skillfully extend it to the prospective trainees.

All the schools have a distinguished history of proficiency and contribution toward developing a professional National Army, and produced men who have graced the annals of military history. These institutions are strategically located in specific terrain conducive to the learning of particular art of warfare and suitably equipped with modern training techniques, computerized system and ability to absorb foreign trainees while providing to them the required infrastructure.

“Arms for Peace”, therefore, is a vital link in the ideological chain of the Pakistan Army. An institution that wields weapons for peace, inculcating in its men the spirit to promote peace throughout the world. Same is reflected in its active participation wherever a situation requires its efforts and services to restore normalcy. With their extensive experience, the Pakistani troops are acclaimed for their peace-keeping endeavours throughout the world. These are the men who bear the expertise and excellence in skills. Pakistan Army, today, stands as a cohesive, dependable and a well cultured professional force providing physical and psychological security to the country.

The training of the Pakistan Army encompasses threat perception and suggests progression while giving initiative and full latitude for realistic and mission oriented training at formation level while keeping the monitoring of the training at the highest level. Quest for excellence in training, therefore occupies centre stage in the gambit of peace time pursuits of an Army, as it epitomises its standards of professional efficiency and operational preparedness. Over the years, Pakistan Army has evolved an indigenous system of training, based on the role of Army, “To defend the territorial and ideological boundaries of Pakistan from external as well as internal threat”.

The philosophy of Pakistan Army Training is therefore, “To achieve excellence in combat” by directing all our endeavours toward developing strong faith in Allah, imbibing self reliance, aggressive spirit, self discipline and an enlightened leadership while remaining cost effective. The aforementioned philosophy, thus, is translated into a practical system to develop an inspired commitment to training in all ranks to ensure following: