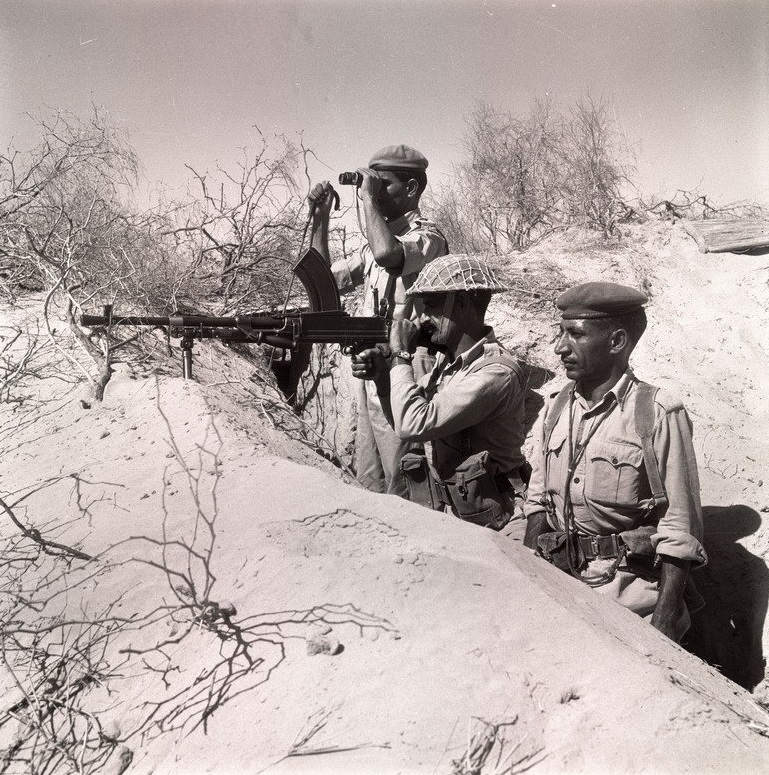 On 1st July 1980, the independent training Battalion of Baloch Regiment at Sukkur was re-designated and it started functioning as Sind Regiment Centre with raising of five training companies. Sind Regimental Centre moved from Sukkur to Petaro which is approximately 35 KM from Hyderabad Cantonment. It shifted to its present location in October 1981 and the centre has come up as one of most modern complexes in the Army. The Sind Regiment Centre was raised initially with eleven Punjab and ten Baloch Battalions Eight additional battalions were raised in the period from 1988 to 1999. Today the Regiment comprises total of 29 battalions. 40 Horse (Sind) is also affiliated with Sind Regiment. The Regiment is proud of the Chiva Rous History and has earned so for one NISHAN-E-HAIDER, 6 SITAR-E-JURRAT, 6 SITARA-E-BASALAT, 12 TAMGHA-E-JURRAT and 28 TAMGHA-E-BASALAT.

Sind Regimental Centre has a unique monument of Indus civilization. It was an indigenous development that arose out of the evolution of developed village cultures in a favourable environment “A GREAT TRADITION” marked both urban and rural element evolved out of Hyderabad’s little communities and characteristic of Indus valley. In other words civilization of Indus in a minimum sense of term is the art of living in town with all that the condition implies in respect of social skill and discipline. This traditional house is also specimen of one of the clans of Sind, who even today decorate their houses with high profile of their ethnological skills. Models of all are preserved in a Monument established in Sind Regimental Centre.

Model of special Catapult named “Wee Bridge” belong to the Commander Khalifah. It was handled by the force of 500 men Engineer “JAUBAT SALMI” shoot the first missile with this machine and below off the flag-pole.

In eighth century the Arabian Sea was dominated by pirates. An Arab vessel which was carrying women and children were looted by those pirates. A young girl wrote a message to Hajaj Bin Yousaf for this Brutality. Hijaj Bin Yousaf nominated Muhammad Bin Qasim (The youngest general in the history) to redress. Muhammad Bin Qasim on 711 A.D. entered in Sind and captured Debal Fort, presently known as Bambhore. It was most important fort because of trade communication and security.

Muhammad Bin Qasim with his 12000 Men, 3000 Horses and 3000 Camels attached amphibiously. The fort of Debal that was the center of gravity professionalism and fighting skill of Muslims resulted in the capture of Area up to Multan. The ardent Muslim expedition not only saved Arab traders from brutal clutches of robbers in sea but also opened gateway to Islam in subcontinent (Indo-Pak). Bambhore Debal is located 44 KM from Thatta on National High Way. Ghulam Shah Kalhora founded the Capital of Sind at the Hyderabad in 1758.

The Hyderabad Fort and city of Hyderabad was one of the strongest places in Sind. The city occupies the site of ancient city of Nerima Kot. The foundations of both were laid in 1758 by Ghulam Shah Kalhora and in 1789 by Mir Fateh Ali Khan Talpur. The successor continued status of Hyderabad as a capital. Hyderabad was the chosen residence of the Ameers and their families upto 1843. After that fort was held by the European officers of the Garrison.

Rani Kot fort is situated approximately 75 miles North West of Hyderabad and 18 miles west of Railway Station Sann on the Kotri Larkana line. A fort holding gigantic fortification walls runs down the contours on bare hills. The fort saved the life of its inhabitants, whenever they faced the invaders. A small river runs in the middle. The fort are three fortresses within the fort area are

From time to time construction work was carried out on the fort. In 1812 A.D. Nawab Wali Muhammad Khan Leghari Prime Minster of Sind and Talpur Government also carried out construction of wall. Mir Sher Khan extended wall in 1st quarter of 19th century A.D. to resist against British forces. Fort was also meant to serve as a strong hold and place of refuge for the Mirs in case they could not contain the march of British.

Fort was founded by Umer the king of the Soomra-Dynasty-(1405-A.D to 1439). The town had a conspicuous fort which was perhaps built in 13 century A.D. Each side of the fort was about 500 feet long, 40 feet height and the wall were so wide that at one time two horse riders could pass easily over it. It was connected with four bastions at each corner and had to stone bastions at the main gate. These stone bastions were brought from Jodpur station. In the center of the fort there was a watch tower created during the period of Kalhora with regime seven heavy cannons displayed on the raised ground near watch – tower. Humayun and his army once moving to Persia stayed in the town. It was the possession of Talpur rulers when British Army occupied Sind in 1843 AD.

Mir Shorab Khan Talpur built the Fort several hundred years back. Kot Diji fort was a strong hold of a member of Talpur ruling families spreading over an area of about 3 KM. It is situated 15 miles south of Khairpur town and north of Kot Diji on National high way. The “S” shaped lies prominent on rang of low line. Stone hills proceeding in a direction from southeast to northwest and reaching the Indus at Rohri. It was built of burnt bricks. Whereas at intervals Rohri stone was used. Some cannons of those days have been removed and placed at important building at main thoroughfare of Khairpur. Sir Charles Napier and his army encamped during their advance to destroy the fort of Imam Garh located on the border of Sind Jaisalmir in the desert area.