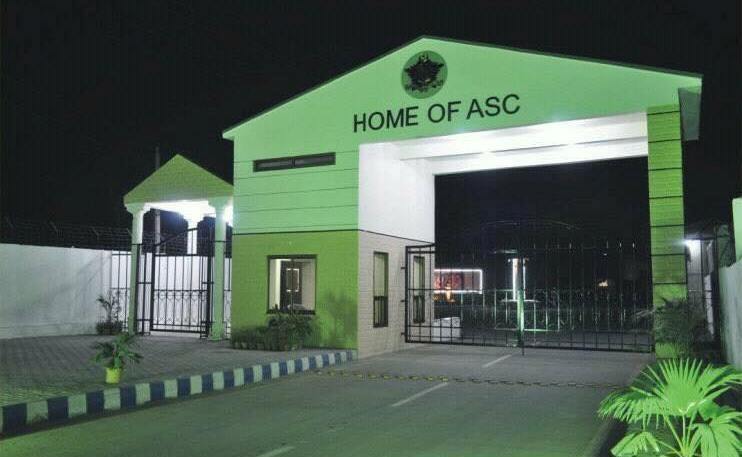 Army Service Corps is one of the biggest and senior Corps of the sub-continent. History of Army Service Corps Centre stems from 1810 when Army Commissariat Department of Bengal, Madras and Bombay was constituted. Since then the Corps has witnessed various stages of evolution, and the Centre evolved accordingly. Initially, Supply and Transport Centres were organized which were located in various parts of the sub-continent to feed the manpower of Indian Army Service Corps. After partition, Army Service Corps Centre was established at Kakul in November 1947. The Centre was then shifted to Chaklala and later moved to Jhelum in 1960. Soon after the 1965 Indo-Pak War, it was moved to Nowshera in 1966, which became its permanent location.

ASC School and Centre are located at Nowshera Cantonment in the Northwest Frontier Province of the country. At 360 meters above sea level, it enjoys a moderate temperature which rarely exceeds 45°C in summer and stays above freezing level during winters. It is accessible both by road and air. Lying at a distance of 110 KM from Islamabad, the capital of the country, and 50 KM from Peshawar the Provincial Capital.

The School is headed by a Brigadier and is organised into three main wings namely, Instructional, Research/Training & Publication, and Administrative Wings. Instructional Wing is further sub-divided into Mechanical Transport, Supply, and Animal Transport Sub-wings. The Institution is affiliated with Peshawar University and Agricultural University Faisalabad for postgraduate studies.

To create an atmosphere conducive to health and the physical growth, all facilities for sports promoting these aspects are provided, which include squash, tennis, basketball, hockey, football, swimming and riding. The students also have an access to Nowshera Club for golf and other amenities.

All basic facilities/amenities of life are available in the local market. Nation Wide/International Subscribers Dialing and Fax facilities are also available in the town. The Institution provides furnished accommodation to the students with the services of an attendant. A well-established Officers Mess is located adjacent to Officers Bachelor Quarters, Apart from routine meals, the mess has the facility of a Tea Bar with tea, coffee, soft drinks, and cigarettes, etc.

The School is also equipped with modern training facilities to train raw manpower into trained soldiers. Following facilities are available: