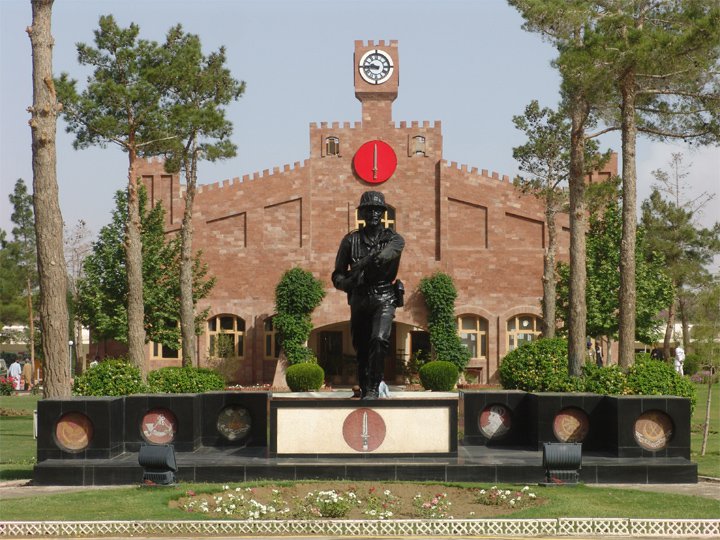 After independence from British rule, the Infantry School was established at Kakul in 1947. Colonel N J G Jones, MBE was appointed the first Commandant of the School on 12 January 1948. The School was moved to its present location at Quetta in 1948 and was assigned the responsibility of weapons training only. Tactical training was organized under the Command and Staff College Quetta.

The Institution continued to function as “Infantry School” till the end of 1956. In January 1957, the School was reorganized and the tactical wing from the Command and Staff College was amalgamated in it. Consequently, the School was renamed “The School Of Infantry And Tactics”.

In 1981 a Research and Development Wing was added to the School. The wing is responsible for conducting trials on infantry weapon systems, reviews, tactical doctrines, and updating all military publications. Since its inception, this wing has made substantial contributions to the Army in general and the School in particular.

When Pakistan began participating more effectively in United Nation Missions, a need was felt to impart pre-departure training to the officers and men proceeding on such assignments. In order to meet this requirement, the Peace Keeping Training Cell was added to the School in 1994. The cell is responsible for educating officers of the Pakistan Army and friendly countries in duties related to employment under the aegis of the United Nations.

The School emblem was adopted in December 1953 which consisted of Roman Shield featuring a bayonet. This crest remained in vogue till 1956. In 1957 while undergoing a major reorganization, the structure of the shield was changed from Roman to Muslim (Circular Shield). The Bayonet retained its central place with a blood-red background.

Quetta has a dry and healthy climate, with no factory smoke to pollute fresh and invigorating mountain air. Winters in Quetta are severe and last from mid October to end March. The temperature during winters, falls to minus 15 degree Celsius necessitating the use of heavy quilts, blankets and heating arrangements. Springs in Quetta are normally pleasant and last from end March to end April. Summers are mild by Pakistani standards and normally stretch from May to August. The maximum temperature during the day seldom exceeds 41 degree Celsius during the hottest period. Evenings and nights are usually cool. Autumn comes in the months of September and October. Snow generally stretches from December to March.

Flying time to Quetta from Karachi is about one hour. There is one flight daily from Karachi to Quetta. By train, Bolan Mail takes 20 hours. Both modes of travel are comfortable. However, train booking is required to be made at least 72 hours in advance.

SI&T being the premier institution for training junior leadership of the Pakistan Army undeniably prides itself to be the custodian of infantry combat culture. It will maintain focus on integrated/combined arms training parameters. SI&T will continue to transform into a “combined arms training intuition” and will contribute to developing thinking leaders with clarity of mind, initiative, and foresight. In this regard efforts will be focused on improving the intellectual outlook of the students besides imparting hardcore professional training, thus infusing competence to undertake tactical missions under conventional as well as sub-conventional warfare. The Infantry School will provide a balance fusion of education and training to its alumnae for ambiguous, uncertain, and complex threats in the resource-constrained environment. The focal point of the entire endeavor will be, “To produce combat worthy Junior Leaders, equipped with requisite professional knowledge and competence to effectively respond to changing / fluid combat situations, through a directive control, by focusing on the development of leadership traits and basic skills for conventional and unconventional operations”.

Over the years, the school campus has been vastly expanded in terms of training, administration, and recreational facilities with a view to providing an ideal environment for the students. All possible facilities available on the campus are within walking distance. Sufficient residential blocks exist to house the students, besides having well-established officers messes, shopping complex, internet cafe, telephone/ telegraph facility, and a bank. The architecture of the school presents a tasteful blend of old and new construction which merges well with the surroundings.

Landscaping has been done with great care and the school is proud to have the largest collection of roses in the garrison which adds to its beauty. The School recognizes the fact that extracurricular activities are an essential part of a student’s life. Therefore, participation in a wide and diversified recreational and social activities is encouraged. A wide range of facilities and equipment for cricket, volleyball, baseball, basketball, tennis, squash, gymnasium, and riding are offered.

The School is headed by a Major General. It has an Instructional Wing and School Headquarters. The School Headquarter is headed by Colonel General Staff and has two branches, which are General Staff Branch, Adjutant and Quartermaster Branch. General Staff Branch is headed by a Lieutenant Colonel whereas the Adjutant and Quartermaster Branch is being looked after by two Lieutenant Colonels. A Brigadier, also the Chief Instructor, commands the Instructional Wing. It has four Divisions and a Research and Development Wing.