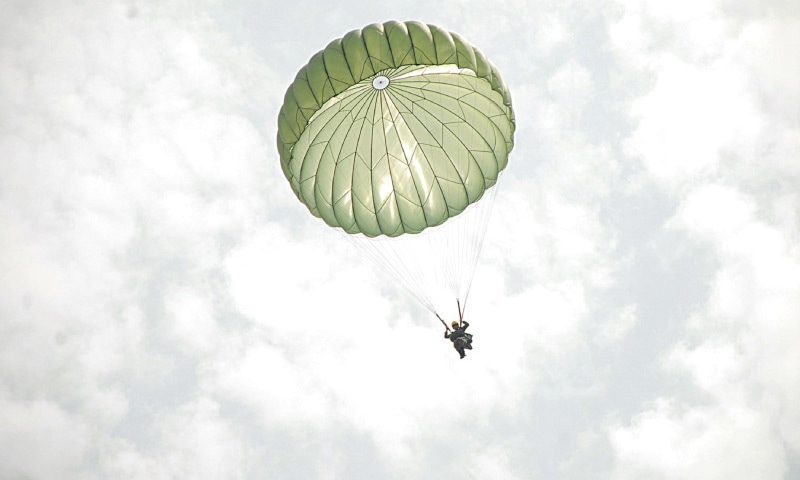 The School was raised in 1964 and initially named as Parachute Training Wing. It was redesignated as Parachute Training School (Special Services Group) on 22 March 1981. In March 1964 the first static line jump was conducted. The first free fall jump (High Altitude Low Opening) was conducted in October 1983 and the first High Altitude Opening jump was conducted in December 1983. Since its inception, the school has so far conducted over 2,60,000 static lines and 30,000 freefall jumps. The school has the singular honor to conduct static and free-fall jumps on Deosai Plains, the highest plains in the world. Parachute Training School takes care of all parachute training. It runs various courses, which deal with parachute operations.

The school is located at Jamrud Road Peshawar. The weather of Peshawar is hot between May to August, however, during the rest of the year, the weather is moderate, with extremely pleasant evenings. Peshawar being the provincial capital is accessible by all three modes of transportation which include road, rail, and air. It is three and a half hours drive from Islamabad, the capital of Pakistan.

To organise basic and advance airborne training for all ranks of Special Services Group, with a view to providing nucleus staff to the commando units for further training in operational employment. Towards this end, the following objectives have been laid to train & provide:

The faculty staff comprises extremely qualified, dedicated, and motivated instructors. They possess rich experience and have conducted numerous courses. The instructor staff ensures the safety and security of the trainees.

The school has a training block that includes classrooms. The school has a vast training area, which is equipped with all the necessary equipment required for imparting parachute training, starting from the basic training to advanced training. There are sheds for the packing and storage of Parachute equipment. The school has its own mess with adjacent Bachelor Officers Quarters for housing the trainee officers. Soldiers are accommodated in barracks.