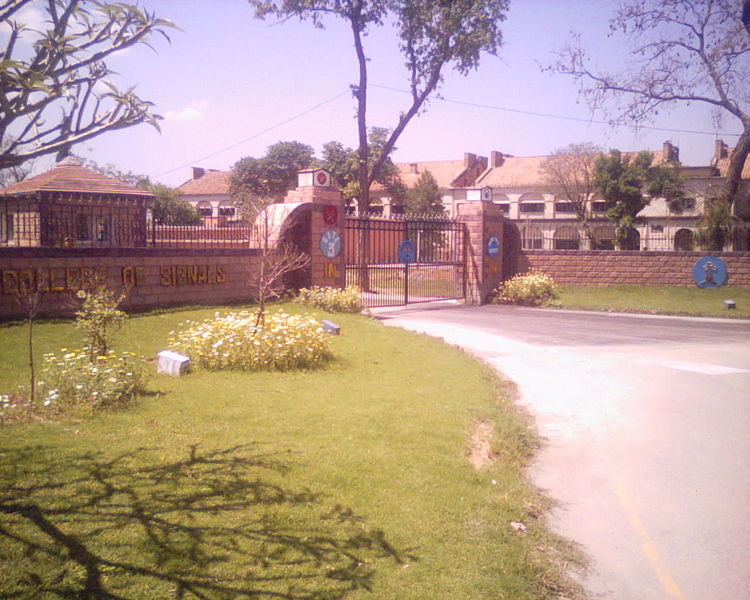 Military College of Signals was raised immediately after the partition of the Indo-Pak Sub Continent in 1947 as School of Signals, with the task of training officers and selected Non-Commissioned Officers of the Corps of Signals of Pak Army. The School had to be raised from scratch because the signal training facilities of the undivided Indian Army were located either at Poona or Jabalpur. Both these cities are now part of India. Lt Col C.W.M. Young British Officer of the Royal Corps of Signals was the first commandant of the School. During the early years, due to the shortage of training facilities, in the country in the field of telecommunication, a number of officers and men were trained at the School of Signals, U.K, and subsequently at US Army Signal School at Fort Monmouth, New Jersey. The College, since its raising, has undergone various phases of expansion to meet the requirements of the Corps of Signals.

The status of the School was raised to that of a College in 1977, when it was affiliated with the University of Engineering and Technology, Lahore for the Telecommunication Engineering Degree program. The College was affiliated with the National University of Sciences and Technology, in 1991 and since then it has progressed phenomenally as a center of quality education. Today the curriculum is not only confined to merely undergraduate level but MCS is also running MS and Ph.D. courses.

The Military College of Signals is located centrally in a peaceful and clean environment of Rawalpindi – one of the major cities of Pakistan near the capital, Islamabad. The College is approximately 5kms far from the Rawalpindi Railway Station and about 2 km from the commercial shopping area. Its location provides the advantages of 24 hours of rail, road, and air transportation facilities.

Rawalpindi is a major city with a population of over a million. The elevation is 510 meters above sea level. The climate is tropical with usual temperatures ranging from 0 OC to 47°C during the entire year. It lies on the historic Grand Trunk road built by Afghan ruler Sher Shah Suri in the 16th Century. Summer resorts like Murree, Abbottabad, historical monuments at Taxila, and the world’s largest earth-filled Tarbela and Mangla Dams are located within 30-100 km from Rawalpindi.

The Military College of Signals is responsible to impart training to Officers/Cadets, Junior Commissioned Officers/Non Commissioned Officers (JCOs /NCOs) of the Corps of Signals, other arms of Pakistan Army, and military persons from allied countries besides conducting postgraduate and undergraduate courses in various disciplines. For the purpose of postgraduate and undergraduate courses, the Military College of Signals is a constituent College of National University of Sciences and Technology (NUST) established by Government of Pakistan in 1993. The mission of the College is laid down as under:

The Military College of Signals is functionally and administratively controlled by the General Headquarters through Signals Directorate. It is headed by a Major General/Brigadier. Normally around 80 permanent members of staff are available in the college. Including army officers, civilian professors, and lecturers. This personnel is highly dedicated, qualified, and competent to steer the future generations of telecommunication engineers in the proper direction. The Military College of Signals is divided into four main functional groups.

The division is headed by a Brigadier/ Colonel and is responsible for all postgraduate and undergraduate courses. The division is further sub-divided into four departments, the Humanities and Basic Sciences Department, Computer Science Department, Electrical Engineering Department, and Cryptology Department.

It is headed by a Colonel. All the research and development tasks related to analysis/ development in training, tactical, and doctrinal aspects are undertaken by this cell. Apart from research activities, the cell is also responsible for publishing a yearly Newsletter for Corps and Signals.

All Military Colleges/Institutions including Military College of Signals were made constituent Colleges of NUST. By virtue of our affiliation with NUST, we have academic linkages with reputed international universities like Michigan State University (MSU) of USA, Iowa State University USA, and University of New South Wales, Australia for split programs at Postgraduate and Ph.D. levels.

The degree programme run under NUST is of 3-1/2 years duration. There are seven semesters: Each semester is of 21 weeks duration. There is 8 weeks summer break and 2 weeks winter break at the end of each semester. On the average a total of six subjects including laboratory work are conducted during each semester. The sequence of subjects caters for a smooth transition from basic to higher level of learning. There are five workdays a week having a total of 29 contact hours. The total duration of Engineering Course is 132 credits hours.

The program is spread over one and a half year duration and offers engineering graduates, blend of sophisticated electronics technologies and modern telecommunication systems.

F.Sc (Pre-Engineering) from any Board of Intermediate and Secondary Education or an equivalent qualification. Overseas High School Certificate/ British General Certificate of Education (Advanced Level)/ International Baccalaureate with Physics, Chemistry and Mathematics, as approved by Pakistan Engineering Council (PEC).
A minimum of 65% aggregate marks each in school and high school. Be up to the standards of physique and eyesight as indicated in the medical certificate.

B.Sc Engineering/BE in first division or equivalent qualification in the relevant discipline, from a PEC recognized institution of Pakistan or abroad preferably with some practical experience in the relevant field.

Extra-Curricular Activities (ECA) play a very important role in the development and grooming of a student’s personality. It allows students to exploit their hidden talents and provides an outlet from hectic and monotonous daily routine. On the other hand, it provides opportunities to the faculty members to intermix with the students, and in the process observe their personality and character traits in a relatively relaxed environment. In MCS, the importance of ECA is well recognized and therefore a broad range of social and recreational activities are offered to its students.

Being one of the prestigious institutions of the Pakistan Army, the Military College of Signals proudly hosts a number of facilities for its students with a campus that fulfils all requirements of the students endeavouring to acquire training here. It provides an environment conducive to the growth of physical and mental skills of the students.

All allied officers are accommodated in a beautiful mess on the Mall Road. It is quite spacious and furnished with all allied facilities required by student officers. Daily newspapers and weekly magazines are also regularly provided to the students.