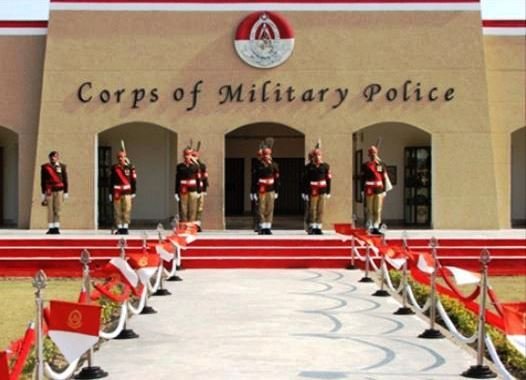 Dera Ismail Khan Cantonment was established in 1820 at Fort Kath Garh, towards the western side of the present Dera Ismail Khan city as a first military fabrication. Later on, in order to control the tribals and protect the frontier of its grand empire, the Britishers achieved total control of Dera Ismail Khan in 1847. Initially, the fort of Kath Garh was the concentration area of the native contingents but later in November 1891, the present cantonment came into existence. The present cantonment is separated into two portions by the city. Corps of Military Police School and Centre is located within the close vicinity of River Indus.

The Corps of Military Police School designs and develops the studies program that prepares officers for the appointment of the officer commanding Military Police units. It grooms officers to assume responsibilities of command of Military Police units which has to undertake a variety of tasks and assignments in the field formations. To ensure the progressive development of the courses, the syllabi have been thoroughly reviewed/ rehashed. Their scope has been widened by adding several new subjects making it all-encompassing and responsive to present-day needs.

The Corps of Military Police School is dedicated to the highest standards of training, education, and professional excellence. The faculty commits itself to this primary goal of preparing officers for multidimensional duties in the field of military police tasks in which wartime duties figure prominently. The faculty aims to:

Due importance is given to healthy extracurricular activities at this institution and is an essential part of a student’s life. Their participation in diversified recreational activities is encouraged. The activities encompass, screening of movies, visits to historical/ recreational sites, indoor/outdoor sports. These include the following:

All allied officers are given a chance to introduce their country to the course. They are advised to procure all necessary material including video films before departing from respective countries.

Dinner/Guest nights are regular features at the school that is attended in respective ceremonial/service dress.

A wide range of facilities and equipment are available here for the pursuit of interest in tennis, squash, volleyball, basketball, football, and cricket.

On 23 March, 14 August, and 6 September special functions are held to celebrate the important events of Pakistan history.

On study tour, the student officers are afforded the opportunity to visit not only the various field Military Police units but also places of historic and national interest to major cities of Pakistan. The tour is arranged for one week towards the later part of the Officer Basic Course.

The Corps of Military Police School is located in Dera Ismail Khan Cantonment in the Northern Frontier Province of Pakistan. Today’s visitor will find the Corps of Military Police School a modern military institution by any standard. Its atmosphere is steeped in history and tradition, yet it is perceptibly functional. It is recognized as a nursery for the Corps of Military Police and one of the premier training institutions of the Pakistan Army, It has attained greater significance within and outside the country as this Institution besides imparting training to own officers and men, also provides training facilities to selected all ranks of Pakistan Air Force, Navy, Civil Armed Forces and selected Officers from foreign friendly countries.