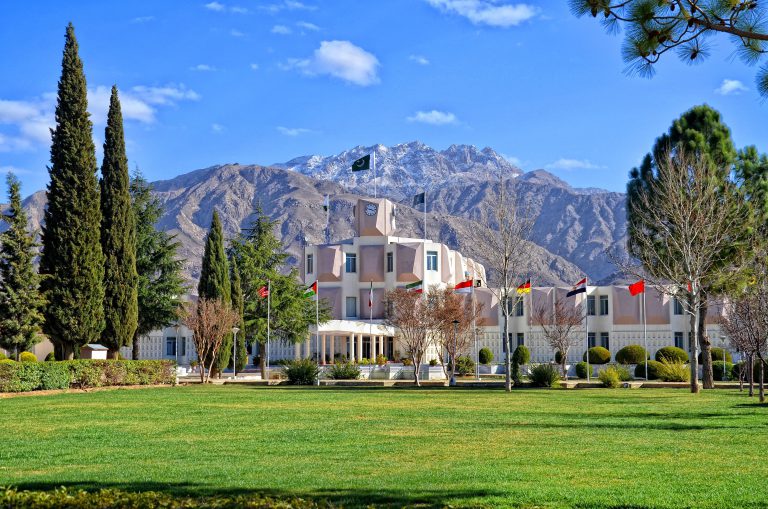 The Command and Staff College, Quetta, is the oldest and the most prestigious institution of the Pakistan Army. It was established temporarily in 1905 at Deolali near Bombay in India by Lord Kitchener, Commander-in-Chief of the British Indian Army. On 1 April the same year, Brigadier General A.W.S. Bayly assumed his appointment as the Commandant, and the first batch of 24 officers commenced their studies. In 1907, the College was moved from Deolali to its permanent location at Quetta. In the disastrous earthquake of 31 May 1935, which claimed 40,000 lives, the College, fortunately, escaped major damage. It was, however, decided to rebuild the Staff College in earthquake-proof construction. The present Officers Mess building and the instructional staff quarters were built in 1936, but work on the main building could not begin due to various compulsions.

The main building of the College was demolished on 26 March 1971 and in its place was built an imposing modern structure. This building was completed in 1975, with its unique clock tower, the flanking wings of the motel rooms, the library and the auditorium, and the terraced garden in front. It symbolizes the commitment of the College towards dynamic growth and progress while taking pride in the solidity of its glorious past.

The Command and Staff College has been the alma mater of many renowned soldiers from countries the world over. Some of the distinguished personalities include Field Marshals Wavell, Montgomery, Auchinleck and Slim (UK), Blarney (Australia), Ayub Khan (Pakistan), and Manekshaw (India).

The Command and Staff College, Quetta, is the oldest and the most prestigious institution of the Pakistan Army. It was established temporarily in 1905 at Deolali near Bombay in India by Lord Kitchener, Commander-in-Chief of the British Indian Army. On 1 April the same year, Brigadier General A.W.S. Bayly assumed his appointment as the Commandant, and the first batch of 24 officers commenced their studies. In 1907, the College was moved from Deolali to its permanent location at Quetta.

The Command and Staff College is located at Quetta, the capital city of Balochistan, at the entrance to the picturesque Urak Valley. To the north, south-east and south-west stand the lonely sentinels of Takatu, Murdargarh, and Chilian, rising to heights of 10,000 to 11,000 feet, stark, bare, and ostensibly inhospitable citadels of sheer rock structure, but enchanting, in a strange way, to the primeval memory of man. Lower than the Murdargarh and closer to the Staff College, the sleeping beauty displays her charms, undiminished by the ravages of that dreaded hangman, Time. This hill feature takes its name from its uncanny resemblance to a lady in repose. She is at her best when the first winter snow throws her in sharp contrast against the skyline.

Quetta has a dry and healthy climate with no factory chimneys to pollute its fresh, invigorating, and mountain air. Winter sets in by November and lasts till end February. Snowfall is light, though it is not unusual to have one as late as March. Quetta winters are severe and minimum temperatures of minus 15 degree Celsius are not uncommon. Providentially the College is closed during the peak winter period.

Quetta can boast of the best spring and autumn in Pakistan. Although summers are warm, the maximum temperature rarely exceeds 41 degrees Celcius. The evenings are extremely pleasant, characterised by a breeze that springs to life an hour or two after sunset. Fans are required during the months of May through August/September.

A syndicate is assigned to a Directing Staff of the rank of Lieutenant Colonel for a period of one term. The directing Staff have high academic credentials and are amongst the best officers of the Army. They impart instructions, guide, and direct the students for the entire duration of the term, after which new syndicates are formed. Hence, each student has four Directing Staff during the academic year. This arrangement provides a fair chance to each student officer to be evaluated and assessed for his performance in the Course.

The Staff Course is a self-generating course and student officers have a Directing Staff for guidance, learning and teaching is through a process of individual study, group discussions, critiques, implementation of plans, and formulation of written papers. The Course generally, is challenging and demands considerable interest from the participants.

The College uses the latest methodology and modern technology to provide the highest quality of education and learning environment. The syndicate method is employed to exchange ideas and benefit from the varied experiences, qualifications, and opinions of Pakistani and allied officers. Self-paced instruction is used for learning facts, techniques, and procedures. The College thus blends various methods of teaching techniques to optimize learning.

The Command and Staff College recognizes that extracurricular activities are an essential part of a student officer’s life. Therefore, participation in diversified recreational and social activities is encouraged. We offer a broad range of activities to fill up student officers’ leisure hours. A wide range of facilities and equipment are available for the pursuit of interests in hockey, tennis, golf, cricket, volleyball, basketball, swimming, squash, gymnasium, riding, and polo.

There is good shooting within motoring distance of the College and Shikar trips are occasionally organized by the Club.

The College has 30 ponies for officers interested in riding. The membership of this Club is also open to ladies and children above eight years of age. Interested officers are expected to bring their own riding kit. Traditionally, this Club is extensively patronized by the allied officer’s community.

Polo is played with enthusiasm, even if sometimes without matching skills. The polo season extends from April to November.

The College traditionally runs a very active ladies club which is known for it’s colourful and interesting activities. Meetings are normally held once a fortnight.

This cell functions under the Senior Instructor Training and deals with all matters related to the guidance and welfare of the Allied Officers. A member of the faculty and a Pakistani student officer is assigned to each Allied Officer to make his stay pleasant and comfortable.

The Command and Staff College has a Main and a Fiction Library. The Fiction Library has a good selection of weekly and monthly magazines in addition to books that offer a variety of light readings. The Main Library houses books, mainly of professional nature. A large number of international newspapers and magazines on professional and general subjects are also available in the Main Library.

The College has a small museum, which was inaugurated on 16 May 1979. This Museum houses various items of interest and historical value pertaining to the College.

The Officers Mess is lodged in an elegant building with an impressive interior decor in traditional style. Most of the formal functions are held in the Mess. The Mess premises are also used for hosting private parties in accordance with the Mess Instructions. A Snack Bar next to the Mess functions in the evening.