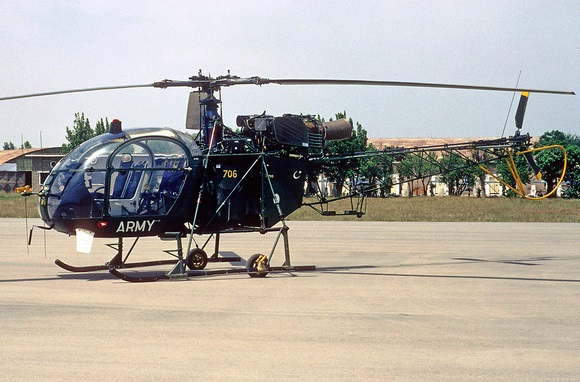 This institution has charted a long arduous course, spread over a time period of forty years to attain its present status. From a humble beginning in 1959 as Air Observation Post School, it acquired the name of Army Aviation School in 1964, when helicopters were inducted for the first time in the Pakistan Army. Ever since its formation, this institution has been effectively fulfilling the training demands of Army Aviation Corps, Pak Navy, and allied countries both in terms of pilot training and conducting Aviation related tactical courses. The journey of Army Aviation Pilot Training through four decades may be summarised as follows:

Pakistan Army Aviation School is located as the entrance of the most well laid out, beautiful and picturesque Cantonment of Gujranwala which is a typical army garrison, housing all the facilities of an ideal military set-up. Winters from mid-December to March at Gujranwala are quite moderate with light rain. From April to mid-June weather remains dry, whereas from mid-June to September, heavy rains are expected because of the monsoon season. From October to mid-December weather remains dry.

Educational Philosophy of Army Aviation School is based on internationally accepted cardinal points of aviation training to include professionalism, self reliance, safety and cost effectiveness. In a nut shell, basic concept of educational training at the Army Aviation School is aimed at training the best professional aviators equipped to handle aviation challenges both during peace and war in any part of the world, while ensuring optimum economy and utilization of resources.

Evening games/sports are organized regularly. Besides sports, recreational/ educational trips are planned for the students.

Stepping into the 21st century with a steady pace of development and advancement, Army Aviation today is the leading edge of the Pakistan Army that has established its professional repute both at the national as well as international level. Army Aviation School is the Alma mater of the Army Aviation Corp is meeting all its operational needs from basic flying training of pilots to conversion on advanced machines. Research and development along with running tactical courses for officers cadre are only a few facets of this institution.

Sister services and allied countries often approach the School for training of helicopter pilots. Training system at the School is vibrant and flexible enough to meet the requirement of a particular country by tailoring the courses as per the requirement of the user. Being the major operators of helicopter in South Asia, mountain-flying training has always been an important part of our curriculum. We proudly claim to be the world’s best in the training of helicopter pilots at high altitudes wherein we expose the trainees to heights up to 6000 meters. The skills imparted to our pilots are strictly in accordance with the international standards.

At School earnest efforts are being made by its faculty members to train professional pilots capable of meeting the ever-increasing demands of the Pakistan Army, our sister services, and allied countries.