Pakistan: An Epicenter of Global Terrorism 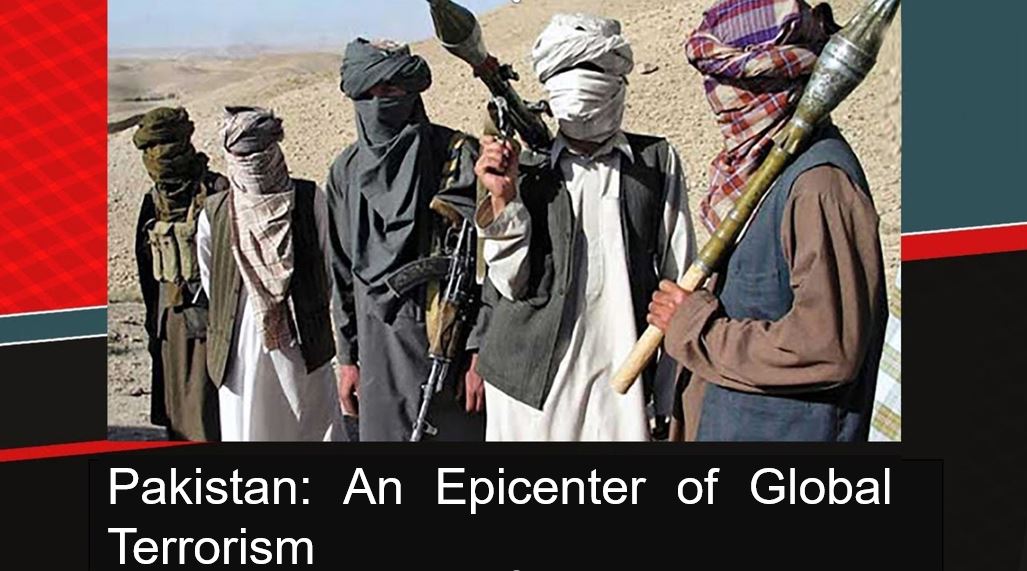 Terrorism is a well thought out strategy wherein the terrorists use violence to create fear and terror among the people. After Sept 11, 2001 attack on the US and Nov 26, 2008, Mumbai attack on India, there is a widespread consensus among the global community that there can not be any justification for terrorism. The international community realises the role played by Pakistan in spreading terrorism across the world.

Mr Jack Straw, the UK Foreign Secretary, stated in the British Parliament on Jun 10, 2002: “Several terrorist organisations including Lashkar-e-Toiba (LeT), Jeish-e-Mohamad (JeM) and Harkat-ul-Mujahideen (HuM)…have been at the vanguard of violent activity in the region. India has long charged that such terrorism has had the covert support of successive Pakistan governments, particularly the Inter-Services Intelligence(ISI) Directorate. Her Majesty’s Government admits that there is a clear link between ISI-D and these terrorist groups.” He further added that the successive governments of Pakistan, through ISI-D, have funded and encouraged these terrorist organisations to make incursions across the Line of Control (LoC) in India and create mayhem and terrorism.

Ms Condoleezza Rice, US National Security Adviser, said on Oct 30, 2003: “ It is unquestionably the case that one and all needs to do more, and Pakistan needs to do more to make sure that there can not be terrorist acting from Pakistan.” The US Ambassador to Pakistan, Nancy Powell, said at the Pakistan American Bussiness Council meeting in Karachi on Jun23,2003: “The government of Pakistan must ensure that its pledges are implemented to prevent infiltration in India; through LoC and end the use of Pakistan as a platform for Terrorism.”

Russian President Vladimir Putin said in Jun7 2002: “we must call on the leadership of Pakistan in the first place to put an end to the terrorist activities being carried from its territory in India.”

On Jan 19 2008, 14 individuals were arrested in Barcelona, Spain’s second-largest city, due to a counterterrorism operation initiated two days before and intended to thwart what the state security agencies evaluated as a suicide bombing plot against the local subway transportation system. Among those arrested were 12 persons of Pakistani origin, and they had links with al-Queda and Tehrik-e-Taliban of Pakistan.

As per the US State Department, regionally focused terrorist groups remained a threat in 2017. Pakistan-based Jaish-e-Mohammed and Lashkar e-Tayyiba continued to pose a regional threat in the subcontinent. Further, this report says that although Pakistan’s National Action Plan calls to guarantee that no terrorists are permitted to operate in the country, many terrorist groups planned attacks outside of the country and continued to function from Pakistani soil in 2017. These groups included the Haqqani Network, Lashkar e-Tayyiba, and Jaish-e-Mohammad.

However, Pakistan remained a safe harbour for regionally focused terrorist groups. It permitted these groups to target Afghanistan, including the Afghan Taliban and affiliated HQN, and groups targeting India, including LeT and its affiliated front organisations, and Jaish-e-Mohammed (JeM), to operate from its territory. It took no notable action against known terrorists, such as JeM founder and UN-designated terrorist Masood Azhar and 2008 Mumbai attack project manager Sajid Mir, who are believed to remain free in Pakistan.

A federal grand jury indicted a 28-year-old Pakistani doctor on an H-1B visa to pledge faithfulness to the Islamic State/Islamic State of Iraq and Levant/Daish (ISIS) and express his yearning to carry out ‘lone wolf’ terror attacks in the US. As per the indictment, Muhammad Masood, a qualified medical doctor from Pakistan, was in the past was employed as a research coordinator at a reputed medical clinic in Rochester, Minnesota. The indictment against Masood was announced on May 15 by US attorney Erica MacDonald. Masood was initially charged by criminal complaint and has been in custody since his Mar 19 arrest at the Minneapolis-St. Paul International Airport. ( Pakistan: The Footprints of Terror South Asia Terrorism Portal, 2020)

In Indian civil aviation history, there have been 13 hijackings involving the Indian Airlines (IA)/ Air India aircraft. Groups carried out seven such hijackings with known links to Pakistan’s Inter-Services Intelligence (ISI) and six by groups with no such links. Of the seven ISI-linked groups, six were indigenous Sikh and Kashmiri terrorists, and the seventh is a Pakistan-based Islamic Jihadi terrorist group. It is believed that Pakistan-backed terrorist groups are active in the Philippines, Myanmar, India, the Central Asian Republics, China’s Xinjiang province, and Chechnya and Dagestan in Russia.

The Afghan Taliban and their Pakistani army patrons are back in Kabul before the 20th anniversary of 9/11. Pakistan’s army Inter-Services Intelligence Directorate (ISI) has backed the Taliban since the group’s origin in the mid-1990s. Under intense pressure in September 2001, the ISI briefly removed its experts and assistance, creating the same panic and flight to the Taliban that the US withdrawal just did to the Afghan army. However, the ISI quickly renewed its support, and that aid continues today. The Taliban/ISI victory in Afghanistan will have significant consequences for Pakistan, dangerous and violent.

Pakistan’s Prime Minister Imran Khan was quick last week to endorse the Taliban’s seizure of power in Afghanistan, praising the militant group, which was nurtured by Pakistan’s intelligence services from birth according to Western security assessments, for breaking the “shackles of slavery.” Furthermore, Pakistan seemingly got in return a prize, as per the news published in various newspapers regarding the appointment by the Taliban of former Guantanamo detainee Abdul Qayyum Zakir as Afghanistan’s acting defence minister.

Media officials had elongated contended that ISI had been a double game in the war on terror in concert, one that was advertised to the world when the US hiding discovered al-Qaida founder Osama bin Laden in a house near Pakistan’s premier military academy. Former Ambassador to Kabul from India, Gautam Mukhopadhaya, dubbed the Taliban’s victory a Pakistani invasion with an Afghan face.

The victory of the Taliban could prove problematic for Pakistan. It may bolster domestic terror groups within Pakistan, including Tehrik-e-Taliban, a jihadist group responsible for killing thousands of Pakistanis civilians and attacking its security forces. There are reports that the Taliban has freed many Tehrik-e-Taliban fighters held in Afghan jails, including the group’s former deputy chief Faqir Mohammad. This victory would have far-reaching consequences for Pakistan, which may be both dangerous and violent. There could be blowback for Pakistan. The Taliban have a foggy relationship with their Pakistani counterpart. Indeed, individuals in the Afghan Taliban are in touch with their fellow Pakistani believers and will offer a haven in their new conquests.

Afghanistan and Pakistan have an elongated history of stressed relations dictated by five recurring factors: sovereignty concerns, security interests, geopolitical dynamics, cross-border ties, and connectivity and trade. Collectively, these forces at work will outline the prospects for permanency in Afghanistan and the wide-ranging region. Sure enough, the conflict will deepen after US and international forces withdraw, battlefield developments will take centre stage. The Afghanistan-Pakistan relationship is likely to deteriorate further, and hatred on both sides could shut out any remaining opportunities to reach a negotiated settlement. Two-pronged ties would affect security, political, and economic dynamics in the long term after a new government takes shape.

Conclusion: Pakistan and state-sponsored terrorism refer to the involvement of Pakistan in terrorism through the backing of various designated terrorist organisations. Pakistan has been recurrently accused by innumerable countries, including its neighbours Afghanistan, India, Iran, and the US, UK, Germany and France, of its connection in a variety of terrorist activities both in the local region and well global. In July 2019, Pakistani Prime Minister Imran Khan, on an official visit to the US, recognised some 30,000–40,000 armed terrorists operating on Pakistani soil. He further stated that previous administrations were whacking this truth, particularly from the US. Pakistan’s active participation has caused thousands of deaths in the region; all these years, Pakistan has supported several terrorist groups despite several stern warnings from the international community.