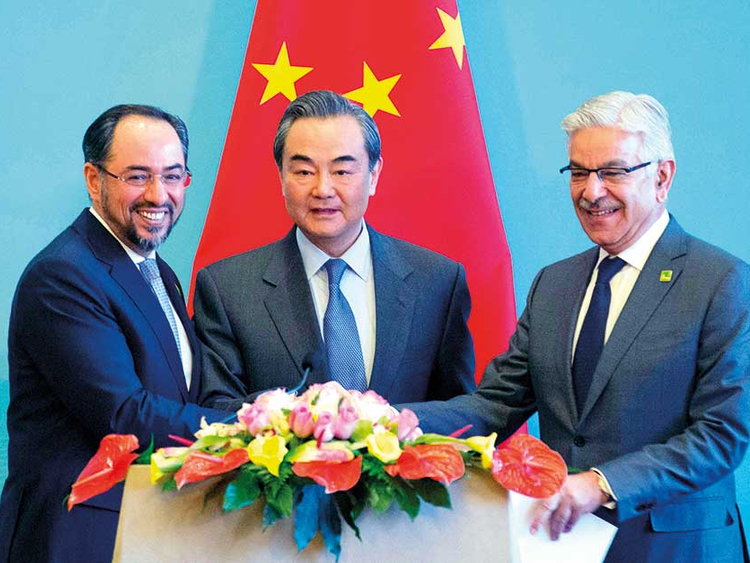 BEIJING/ISLAMABAD: The foreign ministers of Pakistan and Afghanistan appealed to Taliban militants to join peace talks following a meeting Tuesday organized by China to mend strained relations between the two governments.

In a joint statement, the three governments called for a “broad-based and inclusive peace and reconciliation process” following near-daily Taliban attacks in areas across Afghanistan. The three governments said they “call on the Afghan Taliban to join the peace process at an early date.”

Afghanistan and Pakistan are at odds over American and Afghan accusations that Islamabad is harboring some of the fiercest factions of the Taliban, which was overthrown as the Afghan government in 2001 by a US invasion. Those include the Haqqani group, which the US government has declared a terrorist organization.

“Pakistan and Afghanistan agreed to improve their relations as soon as possible,” said the Chinese foreign minister, Wang Yi. “The two sides unanimously expressed the point that they will not allow any party or force to use their territories to engage in the activities that would undermine the security of the other side.”

The talks reflected Beijing’s efforts to expand its political and diplomatic role in the region. Chinese leaders also are uneasy about the potential for militant activity in Afghanistan and elsewhere in Central Asia to spill across the border into China’s Muslim northwest.

The Taliban have stepped up attacks across Afghanistan since the United States and its NATO allies concluded their combat mission at the end of 2014. The insurgents have gained ground across several provinces and increasingly launch attacks in urban centers.

On Sunday, a roadside bomb killed seven civilians in Afghanistan’s southern Helmand province. No group immediately claimed responsibility, but the Taliban have a strong and growing presence in the area.

Also on Sunday, a mortar shell struck a market and killed three civilians during a battle between Afghan security forces and the Taliban in Logar province in the east, according to the provincial government. Seven people were wounded.

Taliban leaders have refused to talk to the Afghan government but have travelled several times to China, held talks with Russia and Iran, and attended conferences in Japan and Europe.

At the Beijing meeting, Pakistan’s Foreign Minister, Khawaja Asif, expressed hope for progress on proposals to improve trade and cooperation in securing their border areas.

Pakistan hosted talks between Kabul and the Taliban in July 2015. Since then, diplomats from Afghanistan, Pakistan, China and the United States have tried without success to organize another meeting.

Other governments have pressed Pakistan to encourage the Taliban to rejoin talks, but Islamabad says it has less influence over the group than others believe.

China and Pakistan agreed to look at adding Afghanistan to an “economic corridor” of dozens of projects including railways and highways being developed by the two governments in Pakistan.

The project, with some $60 billion in planned investment, is part of Beijing’s sprawling “Belt and Road Initiative” to improve trade by building infrastructure across dozens of countries from Asia to Europe. Afghan leaders have lobbied for a place in trade and transportation plans that they say could reduce poverty and improve security.

“China and Pakistan are willing to discuss with Afghanistan, under the principle of mutual benefit and win-win, the possibility of extending the China-Pakistan Economic Corridor to Afghanistan,” said Wang, the Chinese foreign minister.