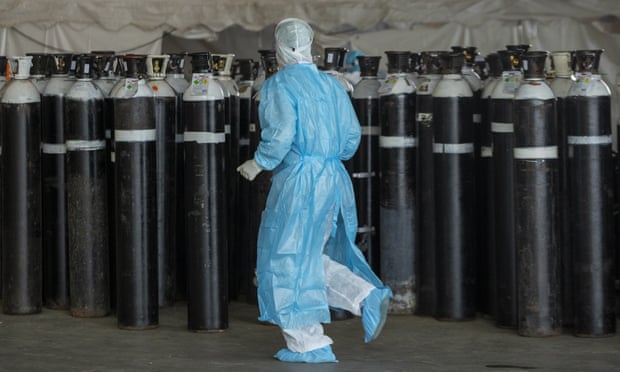 Dozens of countries are facing severe oxygen shortages because of surging Covid-19 cases, threatening the “total collapse” of health systems.

The Bureau of Investigative Journalism analyzed data provided by the Every Breath Counts Coalition, the NGO Path and the Clinton Health Access Initiative (CHAI) to find the countries most at risk of running out of oxygen. It also studied data on global vaccination rates.

Nineteen countries around the world – including India, Argentina, Iran, Nepal, the Philippines, Malaysia, Pakistan, Costa Rica, Ecuador and South Africa – are deemed most at risk after recording huge increases in demand since March – at least a 20% rise – while having vaccinated less than 20% of their populations.

There are concerns that other Asian countries like Laos are at risk, and African countries including Nigeria, Ethiopia, Malawi and Zimbabwe, which have less mature oxygen delivery systems, meaning a small increase in need could create big problems.

Many of these countries faced oxygen shortages before the pandemic, said Leith Greenslade, coordinator of the Every Breath Counts Coalition. The extra need is pushing health systems to the brink.

“The situation last year, and again in January this year in Brazil and Peru, should have been the wake up call,” she said. “But the world did not wake up. We should have known India would happen after seeing what happened in Latin America. And now looking at Asia, we should know this will happen in some of the big cities in Africa.”

Robert Matiru, who chairs the Covid-19 Oxygen Emergency Taskforce, told the bureau: “We could see the total collapse of health systems, especially in countries with very fragile systems.”

Hospitals in India have reported significant shortages of oxygen as the country battles its second wave. By the middle of May, India needed an extra 15.5m cubic metres of oxygen a day just for Covid-19 patients, more than 14 times what it needed in March, according to the bureau’s analysis.

In response, India has banned all exports of liquid and cylinder oxygen.

But experts are worried about India’s neighbours – Pakistan, Nepal, Bangladesh, Sri Lanka and Myanmar – some of which rely on Indian-made oxygen and equipment.

“You’d imagine if they start to see peaks of the same degree, then it could be even worse, because India needs all the supply,” said Zachary Katz, vice-president of essential medicines at CHAI.

The bureau’s data shows that Nepal now needs more than 100 times as much oxygen as it did in March.

Demand for oxygen in Sri Lanka has risen sevenfold since mid-March. In Pakistan, which is suffering its third wave of cases, almost 60% more patients are on oxygen in hospital than during the country’s previous peak last summer, according to a government minister, who warned in late April that pressure on the oxygen supply was reaching dangerous levels.

“The mood is extremely grim,” says Dr Fyezah Jehan, a doctor in Karachi. “I think we are very scared of an India-like situation. We’re hoping that some magic happens, and this [current] lockdown can prevent a new onslaught of cases.”

“Rapidly rising need for oxygen puts pressure on the health system, which it can’t meet, and we see patient deaths,” said Greenslade. “And that will keep happening week after week, month after month, if the vaccine rollout is slow, because at this point, in many of these countries, it’s only increases in vaccine coverage that will bend the curve on transmission.”

The health systems of many poorer countries “could not be more ill-prepared”, Greenslade said. “From the head of state, the health minister, the finance minister … these countries haven’t prioritised oxygen as an essential medicine. As we see in India, many, many people have died and continue to die every day for lack of oxygen.”

However, data from Gasworld Business Intelligence, which analyses the global industrial gases market, shows that many of the countries most in need would still see shortages even if all local oxygen production was diverted to hospitals.

In Iraq, gas companies can produce about 64,000 cubic metres of liquid oxygen a day, a third of what the country’s Covid-19 patients need. In Colombia, the industry can only provide 450,000 cubic metres a day, less than two-thirds of what is needed.

In Peru, gas companies can only reach 80% of the oxygen it needs if all oxygen was diverted to healthcare. “Currently, Peru is registering a drop in [Covid] cases,” said Dr Jesús Valverde Huamán, who works in an ICU in Lima. “However, we are still in need of medical oxygen, especially for hospitals.” It has been a constant struggle to find enough oxygen for patients, he said, apart from a short stretch in November and December last year, when cases dipped.

Greenslade said: “We have to ask a very critical question: why such an essential resource as oxygen is locked up in mining, steel, oil and gas when the poor public hospital system can’t provide enough to keep babies, adults and the elderly alive.

While liquid oxygen is a major source for medics in many countries, it does not account for all of the supply. Hospitals can also obtain oxygen from on-site factories that turn ambient air into oxygen, and from portable concentrator machines.

The World Health Organization, Unicef, the World Bank and other donors and NGOs have shipped hundreds of thousands of concentrators to countries to help them deal with rises in oxygen needs, but manufacturers are running short of parts.

The World Bank has warned that many countries have not applied for emergency loans available to help them upgrade oxygen systems. Last year the World Bank made $160bn (£113bn) available for countries to prepare for Covid-19 and added an additional $12bn this month. The cash can be used to import oxygen or shore up production.

Unitaid and Wellcome have donated $20m in emergency funding for oxygen in low-income countries. The Global Fund has also made $3.7bn in grants available for countries to use on Covid-19 response programmes, including to buy oxygen concentrators and build public oxygen plants.

But Mickey Chopra, a senior official at the World Bank, said countries had applied for loans for ventilators and PPE but not for oxygen supplies. “The variants and the sudden spikes that we’ve seen now have caught people by surprise, to a large extent, and the weakest point in the system has turned out to be the oxygen supply system.”

Looking ahead, Greenslade would like to see governments create comprehensive national medical oxygen strategies, with workers trained to give patients oxygen safely and maintain and fix equipment.

Countries need to have plans in place for unexpected rises in demand, she said. “What they’re doing at the moment is when a crisis hits, [governments] scramble to bring a group together to come up with some way of managing it. But they need to get ahead of the game.”