No end to HR violations by militants in JK 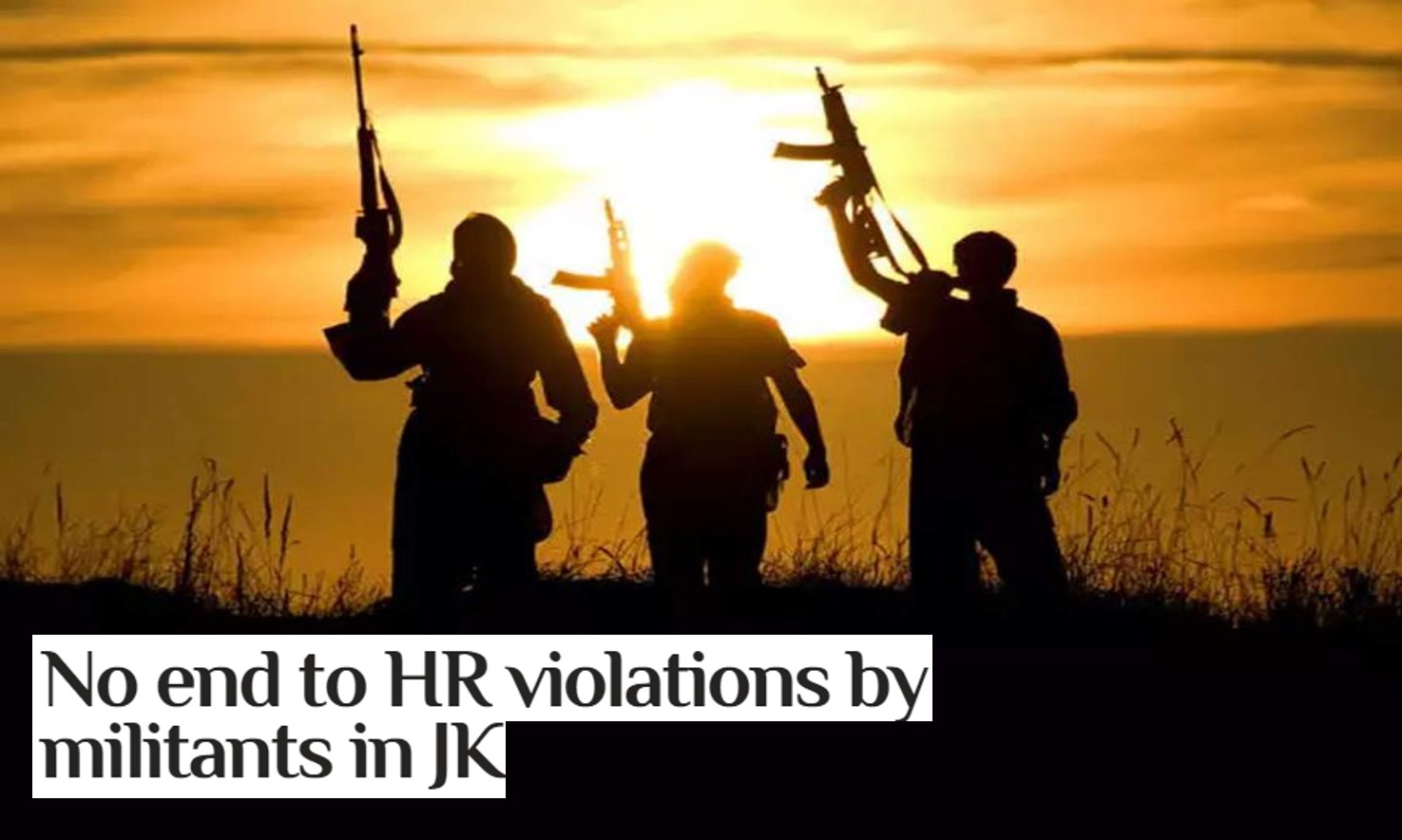 The human rights violations is at peak in Jammu and Kashmir where the Pakistani agents and their supporters, have been picking up the arms and terrorizing even the local populace here from last several decades. Although the security forces have been fighting the militants to ensure that the peace is paved a way and the civilians are protected from the anti-social and anti-peace elements, who became the easy targets of the militants including locals and foreigners as well.

It is worth to mention here that the foreign militants are Pakistani residents, who infiltrate through the Line of Control to keep the gun culture alive here. These Pakistani foreign militants not only get involved in crimes, but also radicalize the youth towards picking up arms.

As per the police records, a total of 148 innocent civilians have been killed due to the militancy incidents in Jammu and Kashmir since the year 2018.

In the recently concluded session of the parliament, the Minister of State (MoS) Home, Nityanand Rai informed the Rajya Sabha that 96 civilians were killed in Jammu and Kashmir between the abrogation of Article 370 on August 5, 2019, and November 30, 2021.

Some of the civilian/political workers killings include: Akash Mehra, the son of a popular dhaba owner in Srinagar, who was critically injured in a militant attack on February 17, succumbed. On 29 March two councillors namely Riyaz Ahmad Peer and Shams ud din Peer were killed after councillors met in the Sopore area of Baramulla district. On 29 May Sanjeed Ahmad Parry and Abdul Azeem Parry, two civilians from Jablipora Bijbehara were killed in their locality.

On 27 July Mehran Ali Pathan a resident of Safa Kadal who was said to be a part of local gang was killed in NawaKadal area of Srinagar. On 09 August, a couple namely Ghulam Rasool Dar and his wife Jawahira Begum from Redwani Kulgam were killed at their rented residence in Lal Chowk Srinagar. On 07 October, two teachers namely Deepak Chand and Supinder kour were killed in Safakadal area of Srinagar.

The figures itself reveal the situation created by the militants in Jammu and Kashmir where the civilians are not only targeted but are also being terrorized by one way or the other. In the recent times, several videos surfaced on the social media platforms in which the militants could be seen asking the commoners to follow their whims and wishes. The civilians, who were part of the mainstream group, were being terrorized and asked to stop taking part in the mainstream world.

Many of the political leaders or activists even announced their resignation from their respective political parties they were belonging to, after they received threats from the militants. Such incidents are tantamount to the fact that the freedom of speech and expression is being deprived in Jammu and Kashmir by a handful of militants, who are following their handlers based in Pakistan to disrupt peace in the Union Territory.

As some are forcing the decision on the barrel of the gun while some damaged the economy of Jammu and Kashmir by making a culture of shutdowns and protests for one reason or the other. The shutdowns were frequently called by the so-called separatist leaders in Jammu and Kashmir have impacted the economy very badly. Even the situation turned so ugly for some businessmen as they never earned the amount, which they had bought as loans from the banks, thus becoming defaulters.

From local shopkeepers to top notch businessmen, everybody faced hardships in the last couple of decades due to the frequent shutdowns. The shopkeepers were never able to keep their shutters open as the separatists would call for a shutdown almost twice a week while sometimes, it continued for months together. The tourism sector, considered as the backbone of Jammu and Kashmir, remained on crutches due to the unfavourable situation that arose due to the frequent bandhs, thus affecting the economy as well as the sector as well.

Not only the economy, but the education of the students also got affected due to the frequent closure of J&K parts in wake of the shutdown calls.

The violence, being supported by Pakistan has always hampered the good governance as the situation never allowed the people at the helm to start a process of development and ensure that the better facilities are provided to the common people. This way, the people always were deprived of the better facilities, thus leaving them to lurch at the large.