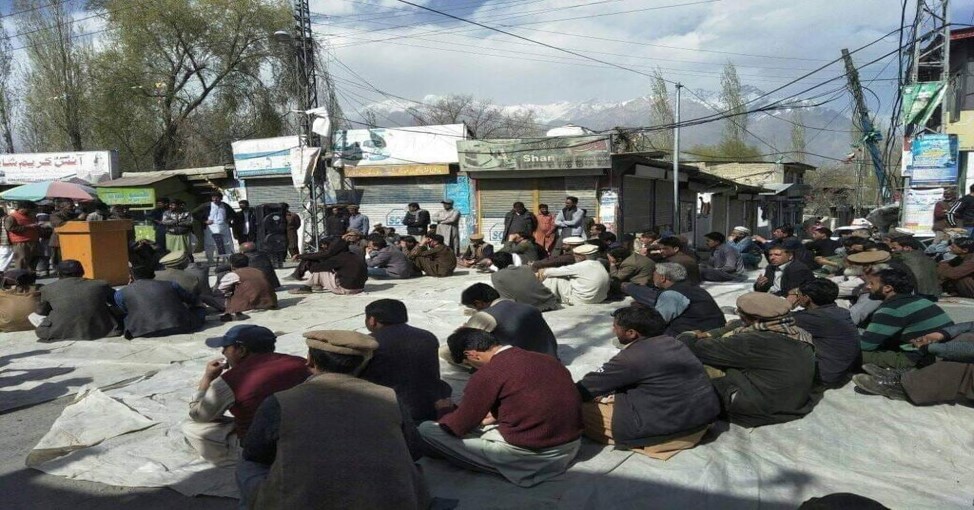 Demanding their rightful property back, the Baltistan natives staged a protest in Skardu against the Pakistan administration for illegal and forceful land acquisition by government institutions

According to the report, the land is very close to Pakistan Air Force (PAF) base Qadri.

Notably, women and children also staged a protest against the Pakistan administration and Pak Army in Ghanche district, Chorbat, Gilgit-Baltistan against continuous harassment over a soldier going missing in the region about three years ago.

As per reports, there are multiple incidents of unrest in Gilgit-Baltistan. The local population is discontent with the Pak government’s attitude and their poor handling of the issues.

The population is feeling threatened by the Pakistan government’s unilateral decisions, especially regarding land acquisition policies.

Pak government under the pressure of land mafias is acquiring land from local communities and leasing them to various companies and oligarchs, according to the reports.

People of illegally occupied Gilgit Baltistan and Pakistan occupied Kashmir have had years of disappointment in the form of state discrimination and state atrocities. And that was when a firm, stable dispensation was at the helm of affairs in Islamabad.

While the country’s economy was already reeling owing to the Imran Khan government’s flawed policies, the other institutions too fear cracks or complete collapse amidst this deteriorating situation . And while the media is focusing on the country’s power centre and its close proximity, it is the people in the illegally occupied regions who are more fearful of their imminent future.

Like lawyers in Gilgit-Baltistan have no idea how the situation would pan out for them. They have been holding demonstrations demanding a judicial bench in what has been declared against their will a provisional province of Pakistan.

Given the current volatile political scenario in Pakistan and the Imran Khan government’s losing political support, these incidents are likely to exacerbate in the coming times as the Pakistan Army will gain more power and the population will continue to be brutally suppressed.

Gilgit Baltistan has been under the illegal control of Pakistan for over seven decades and the people of the region have been increasingly demanding freedom. However, so far they have made no gains with their voices being suppressed violently by the Pakistani state.