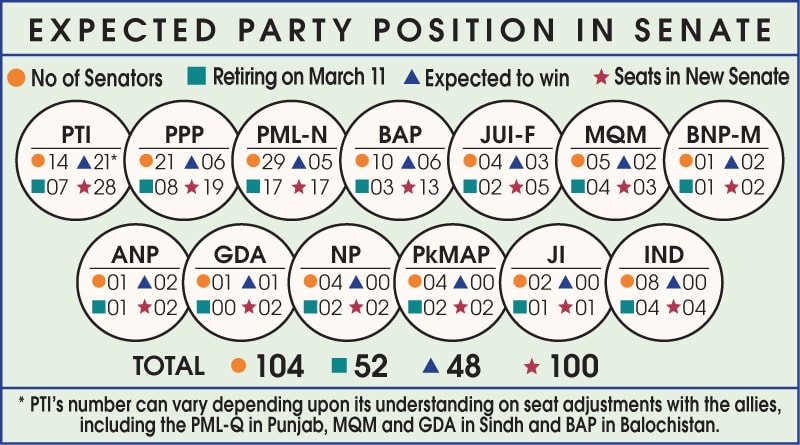 The unexpected win of Syed Yousaf Raza Gillani has shocked the politics in Pakistan. The aftershocks of his victory continue. After forcing Prime Minister Imran Khan to seek a vote of confidence, the victory is leading to various speculations about the election of the Senate chairman. Additionally, after failing to play his role in the Senate elections, Punjab Chief Minister Usman Buzdar is facing the heat. He is likely to be changed.

According to some sources, not only 16 members voted against their party line but the number is higher. PML-N thinks that four of its members and six other opposition members voted for Hafeez Sheikh. While from the government side, 25-26 members voted against the party. Therefore, the number of revolting members goes up to 36. This number is a big issue in itself and implies a political crisis. It implies there is a lack of trust between the members and the party leadership.

Now a rumour doing the rounds is that a possible change in the leadership in Punjab. But unless some alternative name is announced, Buzdar would keep working. The main hurdle for change in Punjab is to find an alternative. As of now, it seems Imran Khan does not have many options.

On the other hand, Bilawal Bhutto is waiting for the moment to unfold his plan: The plan is that PPP along with PML-N and PLM-Q can form the government in Punjab. For that he wants PML-N to accept Chaudhry Pervaiz Elahi as the Chief Ministerial candidate and Elahi to break away with PTI led alliance and join PDM. The plan does not seem to have many prospects. But if Imran Khan does remove Usman Buzdar but does not make Pervez Elahi the chief minister, that will be Bilawal’s moment.

Meanwhile, the election for the Senate chairman is going to be crucial. If the institutions stay neutral, then Yousaf Raza Gillani would be elected for the post. If that happens, it would be a big aftershock, followed by many other major changes.