Kashmir: The Storm Center of World 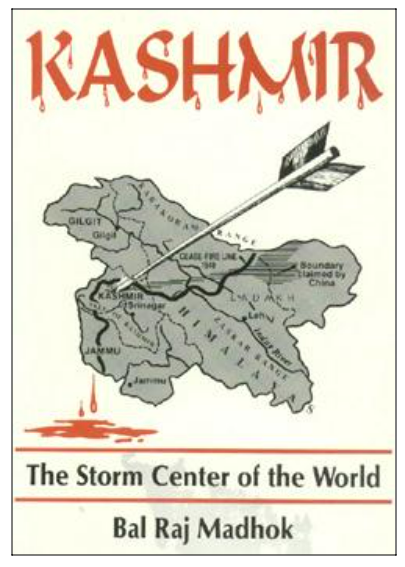 Kashmir: The Storm Center of World by Bal Raj Madhok

Bal Raj Madhok is a well-known personality in the Indian subcontinent and as such does not need any introduction for Indian readers. However, by virtue of the fact that it is well-nigh impossible to foresee the future of a book, any book, if published in India, as they are more often than not banned by the Congress-ruled government to hide facts from the people, it has become necessary that a few words are said about this renowned author and his latest book for the benefit of non-Indian readers in the West. The Moslem fundamentalists have got a strangle hold on Indian politics to such a degree that no books can be published or read without the approval of these highly sensitive individuals sniffing at anything that could even remotely be accused of being blasphemous to a delicate prophet. That explains why it was necessary to publish Mr. Madhok’s book, KASHMIR – The Storm Center of the World, in the United States of America, a bastion of liberty and fairplay and not in India, inspired of its national motto, “Truth Will Prevail”. It was India that had banned Rushdie’s book the first and not Iran or Saudi Arabia!

The Cease Fire eased the situation in so far as it put a stop to the actual fighting. It also removed the fear of the fighting in Kashmir developing into a general Indo- Pak War. But it did not bring the solution of the problem as visualized by the UNCIP in its resolution of August 13, 1948 any nearer. Nothing had been settled about the Truce Agreement and plebiscite which were to follow the Cease Fire in terms of that resolution before India took the initiative to end the shooting War. This put the U.N. Commission in a difficult position. While it appreciated India’s self-abnegation in stopping the actual fighting it could not allow the matters to rest there. It, therefore, after waiting for a few months passed a new resolution on January 5, 1949 which detailed the steps to be taken for the implementation of the provisions of its earlier resolution about the Truce Agreement and the plebiscite. To expedite the work it decided to move India and Pakistan to carry on its mediatory efforts to that end.