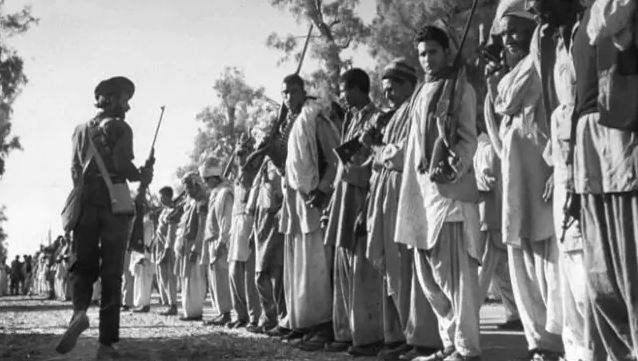 On 22 October 1947, Pakistan raiders equipped, trained and backed by their army entered Kashmir to loot and plunder. This was the commencement of Operation Gulmarg aimed at capturing Kashmir.

Kashmir, till then, was a paradise and had members of all religions — Muslims, Hindus, Sikhs and Christians — living in harmony and peace. The raiders looted, pillaged, raped and kidnapped women and children, irrespective of religion, caste or creed. Some women were taken to be sold as sex slaves in Pakistan. India observes 22 October as “Black Day” to protest against Pakistan’s role in instigating violence and terror in the Valley, an act which continues to this day.

The Pakistan Army gave the raiders the freedom to commit every possible crime in Kashmir. Pakistan’s 7 Infantry Division was tasked to push behind the success gained by the raiders and capture the area up to Banihal Pass. The Jammu and Kashmir state forces fought heroically to hold the raiders back. In many cases, battles were fought to the last man and last round, despite desertions by some troops. The state forces were overwhelmed by the sheer numerical strength of the raiders and military backing by Pakistan.

This terror let loose by Pakistan compelled the Maharaja of Kashmir, Hari Singh, to approach India for help. He formally acceded to India and the first Indian troops, 1 SIKH, landed in Srinagar on 27 October and began pushing the raiders away from the gates of Srinagar. The valour of Indian forces was evident as they fought the raiders and the Pakistan Army, pushing both back to where the current LoC exists.

Has anything changed in the approach and philosophy of Pakistan towards Kashmir, its own people, and its neighbours like Afghanistan even after 75 years? Nothing!

Pakistan continues to support terrorist groups which target innocent Kashmiris. These groups are similar to raiders, trained and equipped by the Pakistan Army. Thousands of Kashmiris have been killed in Pakistan-sponsored violence. Similarly, thousands have been lured to join terrorist outfits and lost their lives in encounters with security forces. This is in addition to innocents killed by Pakistan firing on border villages. Despite these killings, Pakistan claims Kashmir.

Within its own territory, Pakistan has killed lakhs of innocent Pashtuns and Baloch, accusing them of being terrorists. Protests in Balochistan and Waziristan by Baloch and Pashtuns demanding inquiries into extra-judicial killings and disappearances are ignored. A similar scenario is building in Sindh.

In Afghanistan, Pakistan supported the Taliban, which is on a revenge spree, killing thousands of innocents on the pretext of acting against those who supported the previous regime. It also backs Islamic State-Khorasan Province (ISKP), which is ruthlessly targeting minority Shias and aiming to create an environment where the Taliban are given importance as the protector of innocents. The blood of all innocent Afghans killed should be on Pakistan. Nothing has changed in the Pakistan Army’s mindset of targeting innocents.

Killing, raping and looting of innocents have been the nature of Pakistan forces, whether terrorists, raiders, Lashkars or even the Pakistan Army. What it did in 1947, it attempted again in 1965 but was blocked. However, with no interference, it committed genocide on Bangladeshis in 1971. As per reports, almost three million were killed. Bangladesh has been asking the United Nations to recognise 25 March as the World Genocide Day. This must be globally supported. Pakistan is yet to apologise to Bangladesh for its brutal actions.

Another similarity is that in 1947, Pakistan justified the raiders’ actions by lying that it was a spontaneous response to communal killings in Jammu and Kashmir. Its own writers, including the army officer responsible for Kashmir, Akbar Khan, mentions in his book, Raiders in Kashmir, how the entire operation was planned, funded and armed by Pakistan.

Till date this nature of lying has remained the core of Pakistan’s philosophy. It lies on human rights violations in Kashmir, Indian support to Pakistan terrorist groups, etc, words which the world ignores. The world only accepts the fact that Pakistan is the one-stop destination for every UN proscribed terrorist and terrorist group.

Another commonality of Pakistan, which continues to the present, is never adhering to its promises.

On 15 August 1947, it promised Maharaja Hari Singh that it would accept a standalone agreement with J&K. It changed its mind barely 12 days later and sent a message to the Maharaja stating, “The time has come for Maharaja of Kashmir that he must take his choice and choose Pakistan. Should Kashmir fail to join Pakistan, the gravest possible trouble will inevitably ensue.” Operation Gulmarg was already in planning stages and launched on 22 October.

In the present context, Pakistan promised the United States against supporting terrorist groups, while it hosted Osama bin Laden as a state guest. It took coalition funds from the US but employed them to fund the Taliban, which targeted US forces. The nation remains as untrustworthy in words and deeds as it was in 1947.

In addition, Pakistan has maintained its philosophy of combat. It will never employ its army to fight but place them behind terrorists and militias to exploit their success. During Operation Gulmarg in 1947, its Army was tasked to exploit the success of raiders. A similar philosophy was employed during Operation Gibraltar in 1965. In 1999 in Kargil, it placed its predominantly Shia-comprising Northern Light Infantry in the frontline, while keeping its Sunni majority units in the rear. Currently, the Pakistan Army hides in the background while pushing cannon fodder terrorists to the forefront. In Afghanistan, it has pushed the uneducated and brainwashed Taliban to do their bidding and take over the country.

Another similarity is that Pakistan has never succeeded in its operations with India. It failed in 1947, then in 1965, 1971 and finally in 1999. However, it twisted its history to convince its public that it possesses an invincible army, whose defeat in 1971 was due to Indian treachery. It claims victory in all other operations, though only in history books.

Every year India would mark 22 October as a “Black Day” in remembrance of innocents being killed in Kashmir by Pakistan’s treachery. The realisation that despite 75 years, the mindset within Pakistan remains the same has begun dawning globally and protests against Pakistan for killing of innocents, not only in Kashmir but also in its own provinces are on the rise.

In 2020, prior to the COVID-19 pandemic, there were widespread protests against Pakistan’s atrocities on innocent Kashmiris on the Black Day. These were witnessed in Nepal, Japan, Seoul, London, Brussels, Geneva, San Francisco, along with a car rally in Washington.

This year too, the world should be reminded of Pakistan’s philosophy, which has remained unchanged for 75 years, that of killing innocents and employing cannon fodder terrorists, outright lying and hiding its army from battle. It remains as untrustworthy today as it was in 1947.