Pak Govt playing with the Future of Youth 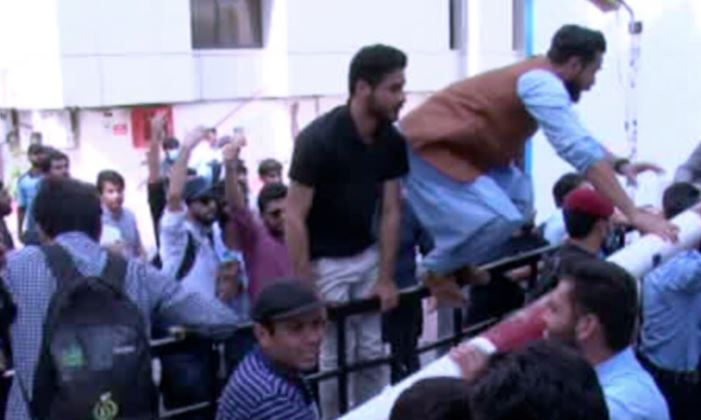 Islamabad police on Tuesday baton-charged young doctors outside the Pakistan Medical Commission (PMC) building while they were protesting against the government’s decision to make the National Licensing Examination (NLE) mandatory for registration.

The protest turned violent when the police resorted to baton-charge and fired tear gas at the demonstrators, prompting some of them to barge into the PMC building.

Later, the police detained around 20 doctors and dispersed the remaining through the use of force, according to a statement from the Young Doctors Association (YDA).

The YDA then called an emergency meeting at the Pakistan Institute of Medical Sciences (Pims) chaired by its president Dr Haider Abbasi, in which the association issued an ultimatum to the government to order the release of the arrested doctors. They threatened to go on a countrywide strike if the police kept the doctors under detention.

In a statement, Islamabad police said the protesters attempted to break into the PMC building and vandalise the property.

The police said some “miscreants” in the meanwhile pelted police with stones and as a result, SP Saddar Zone was injured.

“Tear gas was used to stop and disperse protesters and to prevent damage to the government property,” the police statement said.

It said peaceful protest was the right of every citizen but damage to the government property could never be allowed.

Contention over NLE
The PMC has made it mandatory for all graduates who are currently doing a house job or are ready for it to clear the NLE exam for their permanent registration. Both MBBS and BDS students must have to clear the NLE for a permanent job and to practice medicine in Pakistan. The move has agitated the medical fraternity which has been protesting for the last many months.

In October 2019, President Dr Arif Alvi had promulgated an ordinance that dissolved the Pakistan Medical and Dental Council (PMDC) and established the PMC. A day later, the NHS ministry sealed the council building and fired its 220 employees.

Under section 21 of the PMC Ordinance 2019, it will be mandatory to pass the NLE to obtain a provisional and full license to practice in Pakistan. The National Medical Authority will hold the NLE at least twice a year according to a schedule approved by the council and it will be applicable to all students graduating after March next year.

After its promulgation, the Medical Teachers Association had termed the NLE an “eyewash” arguing it couldn’t ensure the quality of education in medical and dental colleges.

While in August this year, PMC President Dr Arshad Taqi had defended the NLE, saying: “The conduct of the first National Licensing Examination has paved the way for standardisation of healthcare delivery in our nation.”

He had said the NLE was now the standard expected from a healthcare practitioner for a license to practice and be certified as a safe doctor. “As the healthcare regulator, it is our legal and moral duty towards the 220 million Pakistani people we serve that only safe, skilled and competent doctors become part of the healthcare system,” according to PMC head.