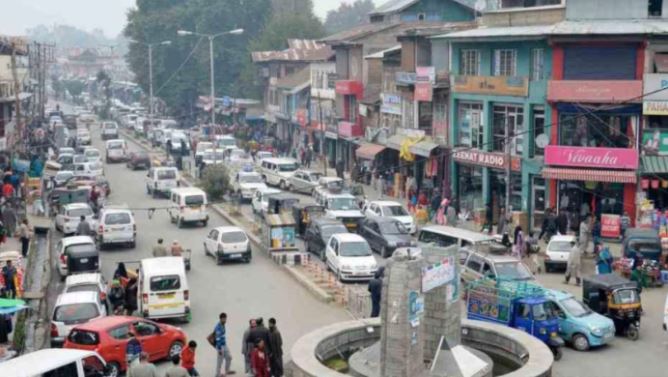 Police Must Strictly Enforce Checks Of All Tenants, Paying Guests
Cross Check Aadhar Card, Voter I Card With National Database
The police say that there are about 200 active militants all over Kashmir. These are only the militants that the police are counting. In a single district of Kashmir, there are up to a hundred ISI operatives. You can imagine how many there will be in all the districts put together. Someone passes off as a migrant labour. Someone is a carpenter. Someone is a rehri wala selling socks, small items of clothing or other minor stuff. They are trained to maximize terror. Only the Soyat attached with them knows their real attention. All these ISI operatives carry fake Aadhar cards or Identity cards which get made easily. The way militants infiltrate into Kashmir, these ISI operatives also infiltrate into the Valley. The militants have a separate network. The ISI operatives have a separate network. They don’t mix with the militant cadres.

The ISI operatives maintain a low profile. They do not use any local mobile network. Most of them are focused on recruiting the youth for militancy and strengthening the terror network.

On one side ISI maintains the terror organizations like Lashkar, Jaish, Hizbul Mujahideen or other smaller terror groups. On the other hand these men are pushed in. These are two parallel operations happening in Kashmir. These trained ISI operatives fulfill diverse tasks for ISI. For decades we have been using the term Na-maloom bandook bardar. The unknown gunmen who carry out acts of assassination. Sometimes these ISI operatives are the Na-maloom bandook bardar.

They are the soyat in Kashmir. They are on the lookout for which boys can be picked up to join the OGW ranks, the militant ranks, or to be part of sleeper cells. These are the men who visit the houses which have suffered in any way due to the conflict. Perhaps a family member has been killed because he was an OGW or a militant. The families of stone-pelters. These men are always on the lookout for who can be a vulnerable target. Then they play on the vulnerabilities. Somebody is poor and is desperately in need of money. They give money, inflame the youth against the state and prepare him for induction into the terror network. Sometimes they work as spies. They are constantly sharing information with ISI regarding anything of interest in Kashmir. What are the big projects happening here. What are the political developments. Who is getting popular. What is the public mood. Which public figure is gaining support.

Strict Adherence To SOPs For House Owners
Must Provide Info On Every Tenant, PG
J&K Police must strictly enforce the Standard Operating Procedures for tenants and paying guests all over Kashmir. There should not be any leniency or laxity on this count. Any laxity by the police or the security forces can lead to huge security risks for the state. The ISI operatives pushed in by Pakistan stay in Srinagar, in the towns or villages all over Kashmir. Sometimes they stay for years together. It is extremely important for JK Police and for the Army to keep a close watch on people staying as tenants or as paying guests anywhere in Kashmir. Accommodation is easily arranged for them through their older cadres in Kashmir. Someone goes to a house owner and says, “Ye bahir se aaye mehman hain hamare.” They ask for accommodation and food for these men on payment of regular rent. They also tell the house owner not to tell anyone about them. The house owner is not interested in who the man is or what he does. He is only interested in the money that is given to him for the accommodation and food.

The police and the security forces must keep a constant check-in each and every house for each and every outsider living as a tenant or paying guest. These checks are conducted even now. But the checks have to be far more intensive.

HOUSE OWNER MUST HAVE COMPLETE RECORD OF TENANTS
The police and the security forces must ensure that each house owner must have complete record in black and white regarding the tenant or paying guest. This record must be submitted by the house owner to the police station of the area at the time of providing accommodation to any tenant or PG. The police must stamp on these papers – Received. Then a team from the police station must visit the premises and verify the tenant or PG staying there. The verification must be done for the tenant or PG. The house owner must keep this stamped file in his possession. As part of the verification, the authenticity of the Aadhar Card or Voter I card in possession of the tenant or PG must be tested. The government has the database for all the Aadhar cards and voter I cards. The police will come to know whether the identity card provided by the tenant or PG is fake or real. Enforcement part is the real differentiator here. Police must ensure that all house owners share information about tenants or PGs. Wherever any house owner has any tenant or PG, he must be asked whether he has provided information to the concerned police station, whether verification has been conducted, and the papers in his possession must be examined.

From the house owner, the police must take copies of the Aadhar card or voter I card. These again must be tested for authenticity. Through these intensive checks, the police will be able to weed out many dangerous elements who have taken up local accommodation.

IMPORTANT TO INVOLVE MOHALLA PRESIDENTS IN SECURITY ACTIVITIES
At places where the mohalla presidents are pro-police or pro-state, they take a keen interest in ensuring that all residents abide by rules for tenants and PGs. The bigger problem is faced in those areas where Jamaat e Islami members or other anti-state persons are the mohalla presidents. In such areas, there is higher incidence of boys getting involved in anti-state behavior like local stone pelting, but it is ignored or even encouraged.

Police Must Keep Cross-Checking Informers
Double Crosser Active In Sopore
Sopore has a police double-crosser. Many know him by the name of Rafiq. He hails from Achabal. Rafiq is a militant recruiter. The police got to know of his activities and arrested him. The police also tried to influence him to work on their side. In order to gain the trust of the police, Rafiq played a game. About two months ago he told two militants to make beds in a panchayat ghar in Natipora, leave dry fruits and a grenade there. Then Rafiq informed the police that two militants were staying at the Panchayat Ghar. When the police inspected the place, they found the grenade. In this way, the local police network thought that Rafiq is giving them correct information and can be trusted. Recently Rafiq had influenced a local youth to become a militant. The parents of the militants released a video, crying and telling their son to leave militancy and come back. But the young man has not surrendered. He is still active in militancy.

Mufti, The Code Name ISI Operative In Sopore
Sopore has a Pakistani operative who is known by the code name Mufti. His role is that of a Soyat in Sopore or wherever he is stationed. Mufti identifies vulnerable boys. He influences them with jihadi radical ideas and moves them into OGW networks or militancy cadres. He also facilitates the movement of pistols in Sopore and adjoining areas. The OGW told KASHMIR CENTRAL that police are not aware of Mufti’s identity or face. He is known only through the inputs received on him.

Rehriwallas or Other Vendors Near Major Installations
A Pakistani named Yunus used to sell socks, slippers, and other small things in front of the police station at Sopore. He was popularly known as Yune Bhai. For a long time, he remained stationed there. The police and security forces were not aware that a Pakistani operative often used to move around the police station with his rehri. Later he was killed in an encounter. Similarly, a Pakistani Jaish terrorist by the name Mohd Sadiq Gujjar used to operate by the name of Aqeeb. He used to sell minor stuff on a rehri close to the Baramulla Police Station. His identity was not revealed for a long time. Later he was arrested by the police. Heavy ammunition was recovered from his possession. Police and the security forces must keep conducting regular checks of the men moving around important installations with rehris or selling minor items.

Unclaimed Bags Found in Kashmir are Diversionary Tactics
Real Action Is Intended Elsewhere
Over the last few days, unknown bags have been found in different parts of Srinagar. About a week ago, a bag with pressure cooker fitted with wires was found at Khawja Bazar area of Nowhatta, Srinagar. The Bomb Disposal Squad (BDS) was called to the spot to examine the bag, and the grenade was defused. Later, an unclaimed bag was found in Qamarwari area of Srinagar, and created a bomb scare. Police found the bag to be empty. Sources in the OGW network reveal that these are diversionary tactics. The militants may be planning some major action elsewhere. The suspicion-arousing bags have been placed in Srinagar so that this area stays on high alert. But some major action may be intended elsewhere, and these are attention-diverting tactics. Sources in the OGW network revealed that the alert must stay high at places where army or police concentration is high, and these may be considered as peak points.

Police Must Keep A Close Watch On Bikers
Over Ground, Workers conduct extensive recce of the area where a militant attack is planned. They study the points of approach and exit, the points from where the attack can be executed, and the CCTV cameras in the area. Recce on motorbikes or other two-wheelers are most preferred. The police and security forces must keep a keen eye on the movement of bikers. Sources in the OGW network reveal that militants or over-ground workers prefer bikes. They find it easy to bypass nakas by moving through side lanes on a bike, which may be difficult on a four-wheeler.

Favourite Recce Hours For OGWs – From About 4 pm to 8 pm
Militants and OGWs find it the easiest to conduct recce for future attacks from about 4 pm to 8 pm. During this time, the forces deputed at a naka are fatigued from being on duty since morning. In times of fatigue, they may not be as alert to any suspicious movement. The OGWs know that during this time, there are lesser chances of their being stopped or caught. Hence these are considered opportune hours for movement.