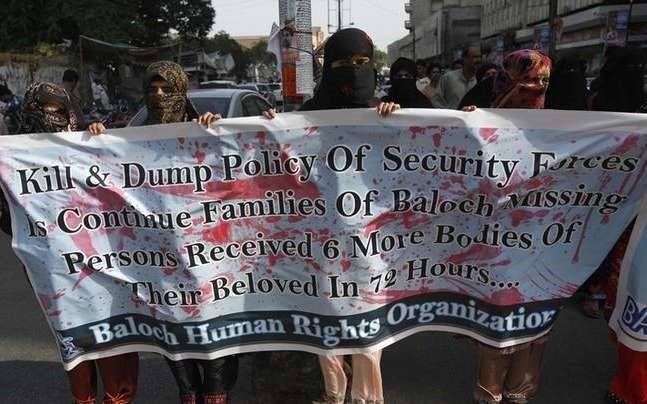 On September 22, 2017, Husain Haqqani, former Ambassador of Pakistan to the United States, addressed the Human Rights Commission Session at Geneva with the following words on Balochistan.

I come to this event as a Pakistani friend of Balochistan, in the belief that human rights are universal and their violation should not be ignored out of misplaced patriotism.

Europeans, Americans and Israelis who criticise the violation of human rights by their own governments show moral courage.

The world would be a better place if Indians spoke out when human rights are violated in Kashmir, Myanmar’s leaders speak up when their army deprives the Rohingya of their life and dignity, and Pakistanis recognise that injustices against the Baloch, Sindhis, Mohajirs and religious minorities must end.

I am a Pakistani and I want to see a civilian, democratic, politically stable and economically strong Pakistan that guarantees rights to all its component ethnicities and nationalities; a Pakistan that is at peace with itself and its neighbours.

It is tragic that those who advocate talks with globally recognised terrorists such as the Taliban, and speak out for the Muslims of Kashmir and Myanmar, have an intransigent position when it comes to engagement with the leaders and people of Balochistan.

They choose to stay silent over the well documented atrocities against the Baloch people in Pakistan. I do not wish to be one of them.

I do not support foreign intervention nor am I an advocate of secession.

But I understand the sentiments of the Baloch, some of whom are now completely disillusioned with Pakistan and are asking for freedom.

Instead of using force against the Baloch, it would be best to recognise the sentiments and aspirations of the Baloch people.

Last year, Pakistan’s federal minister for ports and shipping, Mir Hasil Bizenjo, acknowledged that “if a referendum were held in Balochistan today, the militants would win.” He added that there will be no referendum, implying that the status quo would prevail through force.

The transformation of erstwhile East Pakistan into Bangladesh should be a lesson in the limits of military power in building a nation or keeping a country together.

The Baloch and the East Pakistani Bengalis were among first to disagree with the West Pakistani security establishment. Starting from the 1970s, the Baloch have been fighting for more autonomy within Pakistan. Their struggle has been brutally suppressed by the Pakistani state.

Even now, Balochistan is geographically the largest of Pakistan’s four provinces, but it is the least developed.

Pakistan is urbanising quickly with 40% urbanisation, but 75% of Balochistan’s population remains rural.

According to a report on Pakistan’s Multidimensional Poverty Index (MPI), compiled in 2016 with support from United Nations Development Programme (UNDP) Pakistan and the Oxford Poverty and Human Development Initiative (OPHI), University of Oxford, nearly 39% of Pakistanis live in multi-dimensional poverty, with the highest rates of poverty in Federally Administered Tribal Areas (FATA) and Balochistan.

The report found that over two-thirds of people in FATA (73%) and Balochistan (71%) live in multidimensional poverty.

The report also found that the decrease in multi-dimensional poverty was slowest in Balochistan, while poverty levels had increased in several districts in Balochistan and Sindh during the past decade.

Balochistan provides 40% of Pakistan’s energy needs and 36% of its gas production, along with minerals.

Yet, 46.6% of households in Balochistan have no electricity. Only 25% of villages have rural electrification.

On top of this, the Baloch are deprived of their political rights and are targeted with state violence and oppression. The latest US Department of State Human Rights Reports for 2015 and 2016 spoke of “politically motivated killings of Baloch nationalists in Balochistan.”

The State Department report quoted the testimony before the Senate of Pakistan Standing Committee on Human Rights by Balochistan’s Frontier Corps Deputy Inspector General for Investigations and Crime, who declared that 1,040 persons had been killed in Balochistan in 2015-16. Although he claimed there was “no evidence of security agency involvement in the killings”, most evidence pointed out otherwise.

The South Asia Terrorism Portal (SATP) recorded that journalists, teachers, students and human rights defenders also were targeted by state and non-state actors in Balochistan. As of November 20, at least 244 civilians were killed in Balochistan in 2016, compared with 247 during 2015.

State Department’s Country Report on Human Rights in Pakistan for 2015 and 2016 stated, “There were kidnappings and forced disappearances of persons from various backgrounds in nearly all areas of the country. Some police and security forces reportedly held prisoners incommunicado and refused to disclose their location.”

Human rights organisations reported many Baloch nationalists as among the missing.

The International Voice for Baloch Missing Persons listed 156 individuals in its online database of missing persons who had been abducted during the year 2015 alone.

The Human Rights Commission of Pakistan (HRCP) listed 107 individuals as victims of “enforced disappearances” in Balochistan in the first nine months of 2015.

The Voice of Baloch Missing Persons (VBMP) issued a report in August 2015, detailing the discovery of mutilated corpses in Noshki and Kalat districts of Balochistan and what VBMP termed the inadequate measures taken to preserve and identify the bodies, according to the State Department Report. It cited NGO statistics that the total number of persons who had disappeared could be greater than 19,000.

The report also noted that the Balochistan home ministry had officially acknowledged the detention of 8,326 “suspects” in the province between December 2014 and September 15, 2015.

According to the State Department report, “During the year, the VBMP claimed to have records of 157 mutilated bodies found in Balochistan and of 463 missing persons. Official home ministry of Balochistan figures indicated that authorities had recovered only 164 bodies in Balochistan during the year.”

According to a 2014 report by the Balochistan government’s home and tribal affairs department, over 800 bodies were found in the province over a period of three and a half years – 466 victims were identified as ethnic Baloch, 123 as Pashtuns and 107 from other ethnicities. Meanwhile, 107 bodies remained unidentified.

Of the 466 Baloch killed in the province, most were political workers while the remaining were killed in incidents of targeted killings and tribal disputes.

Amnesty International’s report on Pakistan for 2016-2017 was no different. It pointed out “significant levels of armed conflict and political violence….in particular in Balochistan.”

The US Department of State Country Report on Human Rights Practices for 2015 and 2016 pointed out, “Pakistani authorities did not allow international organisations access to detention centers most affected by violence in KP, FATA, and Balochistan.”

While perpetrating enforced disappearances and extra-judicial killings, the government of Pakistan also tried hard to suppress any information about its actions coming out. In the Freedom in the World Report for 2016, Freedom House said that the Pakistan government blocked more than 400,000 websites that year.

The provincial government in Balochistan blocked access to a Baloch human rights blog run by journalists. The government blocked several Baloch websites, including the English-language website The Baloch Hal and the website of Daily Tawar, a Balochistan-based newspaper.

In a report in 2014, the International Crisis Group had pointed out that Pakistan’s policy in Balochistan has been one of brutally suppressing the Baluch insurgency, instead of trying to understand and accommodate demands for political and economic autonomy.

According to the Human Rights Commission of Pakistan, the last few years have seen a rise in civilian casualties in Balochistan because of operations by the security forces.

Balochistan comprises 43% of Pakistan’s land area and 6% of Pakistan’s population. But the representation of the Baluch in Pakistan’s institutions is not proportional to their number.

According to a report by Pakistan Institute for Peace Studies, as of 2005, there was not a single Baloch at the head of the top 200 businesses in Pakistan, not one Baloch Ambassador and only 502 Baloch were recruited in the army that year.

According to reports by Pakistani experts and by the International Crisis Group, as of 2006, there were only 15,000 Baloch in the 550,000-strong army (excluding paramilitary forces) or approximately 1.3%.

These injustices need the world’s attention.

Balochistan is the cauldron of the worst human rights violations in Pakistan, which does not have a good track record of upholding human rights in general. Its oppression of religious minorities – including Christians and Ahmadis – is widely recognised.

In recent years, Hazara Shias in Balochistan and Shias in Parachinar in the FATA have also come under attack and subjected to ethnic cleansing to facilitate militant operations in their traditional areas by Afghan Taliban and the notorious Haqqani network.

We should not let Balochistan become a battleground for rival external powers. The people of Balochistan deserve better than being oppressed by Rawalpindi and Islamabad or being used as pawns in international great games.

Instead of attacking and destroying the Baloch, Sindhis, Pashtun, or Muhajirs, the Pakistani military establishment should focus on eliminating safe havens for international terrorists like Al-Qaeda, ISIS and the Afghan and Pakistani Taliban.