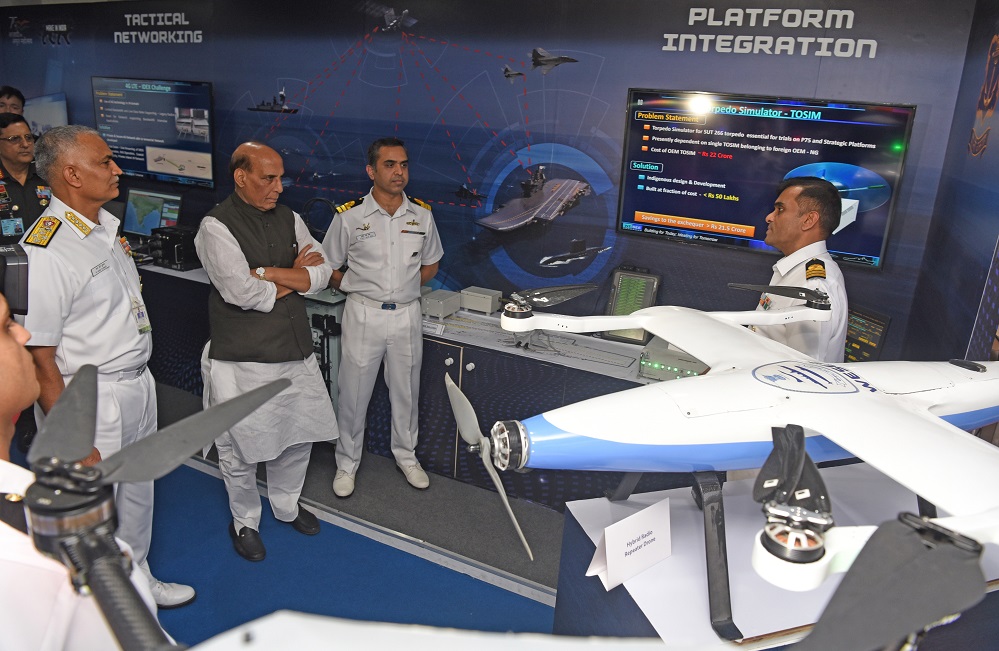 Defence Minister Rajnath Singh’s recent statement reaffirming New Delhi’s resolve to reclaim Pakistan-occupied Kashmir (PoK) has pressed a panic button in both Pakistan and China. What has given Islamabad and Beijing more jitters is a Srinagar based senior Indian Army Commander’s remarks that “We will not look back once given orders”. Again another message from Rajnath, “Dhairya rakhiye,” (be patient) as some people in his public meeting shouted they want Pakistan Occupied Kashmir (PoK).

The developments that took place during Pakistan Prime Minister Shehbaz Sharif’s recently wrapped-up visit to Beijing betray the nervousness that the two countries are having after the tough ‘PoK’ statements from India. “PM Sharif and Chinese President Xi Jinping joined by Prime Minister Li Keqiang went into a huddle ostensibly to discuss various matters aimed at deepening bilateral ties, but the Kashmir issue in the backdrop of terse “PoK remarks’ from India hijacked the meeting,” top diplomatic sources told The Sunday Guardian.

After talks between Sharif-Xi-Li, the remarks and statements reflecting their views on Kashmir and CPEC were nothing but a proof of panic reaction from the two all-weather allies,” diplomats explain. What Jinping, Li and Sharif shared with media after talks spoke volumes about the level of nervousness and panic that India’s pledge to retrieve PoK has created in the government establishments in Islamabad and Beijing. There was no mention at all about any significant investment promise from China even in the on-going CPEC projects for which Sharif was so keen.

All that China did was reiterated its “invasive” stance over the Kashmir issue, promising to support Pakistan in protecting ‘territorial integrity’, conveniently ignoring the fact that PoK is in illegal possession of Islamabad. After this, Jinping expressed his ‹concern› about the safety of Chinese nationals in Pakistan. He conveyed hope that its all-weather partner (Pakistan) will provide a safe environment for Chinese institutions in Pakistan.

“What does all this suggest? Nothing could have illustrated uneasiness in China and Pakistan after India’s strong signal about PoK better than the statement from Xi Jinping and Li-Sharif,” sources pointed out. “Jinping expressing concern over Chinese nationals in Pakistan and repeatedly talking about support to Islamabad ‘against any threat’ said it all as these remarks came right after India vowed to take back PoK,” said a diplomat. “Pakistan PM Sharif, who had some other financial and economic agenda at hand to discuss with the Chinese leadership, remained focused only on the Kashmir issue particularly in the light of Rajnath’s assertions, and that is what gobbled up most of the time and focus of his Beijing visit,” he added.

Sources told The Sunday Guardian that Xi Jinping took a detailed briefing from Sharif on “the current situation in the valley”, following which a long discussion took place on the Kashmir issue, with the Chinese President asking Sharif to ensure safety and security of Chinese nationals involved in the CPEC projects there (PoK). In fact, China is quite concerned about its investments in CPEC projects passing through the PoK region. Xi Jinping, without promising any investment hike, asked Pakistan to be ready to extend the CPEC project to Afghanistan. This was, in fact, aimed at irritating India after the defence minister talked tough about reclaiming PoK. Xi speaking about support to Pakistan repeatedly was also aimed at giving a message of sorts to India, diplomats said.

“Our position of CPEC is quite clearly known to China, Pakistan and the entire global community. We are repeatedly saying that CPEC violates our territorial sovereignty. Rajnath Singh’s latest statement expressing vow to reclaim PoK reiterates this position, emphatically and without any doubt,” diplomats said. Sources said that Xi and Sharif discussed the flagship CPEC plan, but did not announce any new major investments.

Defence Minister Rajnath Singh on 27 October said that India’s journey of development would not be complete without reaching India’s territories illegally occupied by Pakistan, including Gilgit and Baltistan. His comment was seen as a reaffirmation of New Delhi’s resolve to wrest back the control of India’s territories under occupation of Pakistan. Days after the Defence Minister’s statement, Chinar Corps Commander Lieutenant General ADS Aujla said the Army is fully prepared to act on whatever orders are given to it.

India had objected to references to Jammu and Kashmir in the joint statement that had been issued during Pakistan PM’s visit to Beijing. New Delhi said on Thursday that references to Jammu & Kashmir were “unwarranted” and criticised plans to build more projects in Pakistan Occupied Kashmir (POK), with possible extensions to Afghanistan, under the China Pakistan Economic Corridor (CPEC). “CPEC includes projects on the sovereign territory of India under forcible and illegal external occupation… Any attempts to involve third parties in such activities are inherently illegal, illegitimate and unacceptable, and will be treated as such by us,” Ministry of External Affairs (MEA) spokesperson Arindam Bagchi said, calling the infrastructure projects an attempt to “change the status quo” in POK.

In fact, after Sharif-Li talks, the joint statement issued in Beijing also called for “sincere dialogue” to resolve the Jammu & Kashmir dispute, and said that the resolution should be based on “the UN Charter, relevant UN Security Council resolutions and bilateral agreements”.

“The Union Territory of Jammu & Kashmir and the Union Territory of Ladakh are and always will be integral and inalienable parts of India. No other country has locus standi to comment on the same,” Bagchi said, slamming the references, particularly to the UN Security Council resolutions, that India has “consistently” rejected. Reliable sources told The Sunday Guardian that under pressure due to India’s hint at retrieving PoK, Pakistan and China are working on a plan to foment troubles for India in the region. There may be more bids by China to stall any other resolution by India in UNSC to blacklist Pakistan based terrorists.