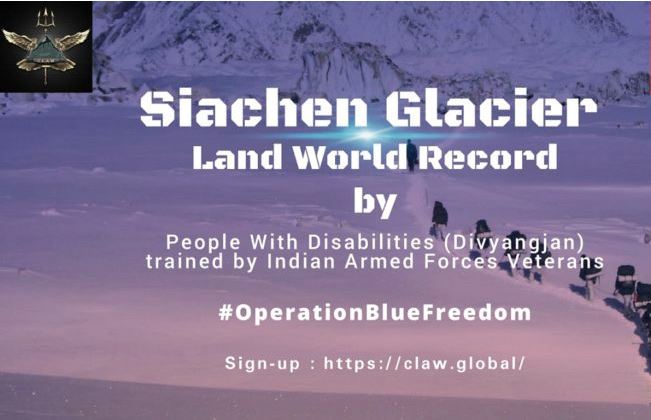 A team of specially abled veteran soldiers, under the banner of CLAW_Global, has recently created a world record by becoming “the largest number of people with disabilities to scale the world’s highest battlefield (Siachen Glacier).”
CLAW is an international organisation for soldiers disabled during active service.

The Indian Army facilitated and trained the team to achieve this milestone.
The project code named Operation Blue Freedom was conducted by the CLAW team with active support from the Northern Command of the Indian Army under whose operational control the Siachen region falls.
Kumar post is at a height of 15632 feet; the approach to the post is predominantly snowbound and climbing up to it is a challenge for the fittest soldier and mountaineer.
How difficult it would be for a person with a physical disability can be imagined; the team climbed a total distance of 60 km atop the spine of the Siachen glacier, taking five days from 7 September, to finally reach the Kumar Post on 11 September.

The foregoing was one among a series of adventure and social activities that the Northern Command has conducted in recent time in the Union Territories of Jammu and Kashmir and Ladakh.
Another unique project was a cycle rally for women organised at Baramulla, Srinagar on 12 September. The rally was organised to commemorate 75 years of India’s Independence.
It commenced from Baramulla and terminated at the Line of Control near Kaman Aman Setu, Uri. It was the first cycling event of such magnitude to be conducted in Kashmir and was a grand success.

The tremendous response translated into participation of more than 140 women over a route spanning 65 Kms. The eldest participant was the famous cycling enthusiast Anupama Bhave who continues to create records in cycling at over 70 years of age.
Actor and model Milind Soman and his wife, Ankita Konwar, flagged off the event and also participated in it. The idea of an exclusive Women Cycle Rally was conceived after an open cycle rally was organised on 13 August, 2021.
In his inaugural speech Lt. General DP Pandey, GOC Chinar Corps, spoke about the active and positive role that women have played in enriching the Kashmiri society.
He exhorted young girls to take up sports for an active and healthy life.

The Indian Army has been consciously working towards women empowerment in Kashmir through various sporting events.
Yet another impressive event organised by the Northern Command was a walkathon in Gurez on 13 August as part of the Jashn-e-Azadi celebrations.

The events included a 10-km mini marathon for the youth and Army men, a 3-km run for fun for school children and a walkathon for school girls and women of Gurez.
The objective was to rejuvenate the enthusiasm, energy and pride of Independence Day amongst the people of Gurez, especially the young people.
More than 200 persons participated in the colourful event With the COVID threat under control academic activity under strict medical and security protocol has commenced in J&K.

Accordingly an Annual Training Camp (ATC) of 3 Jammu and Kashmir Battalion NCC was conducted at T Suntwari, Machil.
Post the training activity, 60 cadets were taken for a visit to an Army Engineer Regiment at Pattan, District Baramulla.
Earlier in the year, the Indian Army has added to the celebratory atmosphere by organising a series of winter festivals.

The successful conduct of the foregoing activities clearly illustrates that the Union Territory of Jammu and Kashmir is well on the path of normalcy.
In this effort, as always, it has with it the humane and welfare oriented support of the Northern Command.

Alongside its achievements in operations, the Northern Command has earned for itself the reputation of being a “People’s Army.” In the domain of “Winning Hearts and Minds” (WHAM), the Northern Command has set a new benchmark.
Decades of terrorism and turmoil had a devastating effect on the psyche of the people of Jammu and Kashmir, especially so, in the Kashmir valley.

The Indian Army has put in great effort to ameliorate the suffering of the people through welfare initiatives, in particular, Operations Sadbhavna.
There are many areas like education, infrastructure development, medical aid etc where the army takes initiative to assist the people.
In times of calamity and natural disasters anywhere in J&K, the Northern Command has unilaterally undertaken relief and rehabilitation works at a massive scale, at times when it was itself grappling with the effects of the calamity.

The initiatives that the army takes under Operation Sadbhavna, brings it into close contact with the people of Jammu and Kashmir, especially the youth which gives to the army an opportunity to guide them on the path of productivity and progress.
It is in this aspect that the aforementioned adventure and sports activities gain significance.

The central theme of all the functions being held in Kashmir is Badalta (transforming) Kashmir.
The objective of the socio-cultural outreach is to energise the people by highlighting the culture and tradition of Kashmir and instill in them confidence to take advantage of the facilities being provided to build the future of the region.
It is designed to create a positive and energetic environment among the people.

The Indian Army and the people of Jammu and Kashmir have truly been friends and partners through all travails and challenges that the state and its people have faced during this period.
The locals share a deep bond of trust and faith with the soldiers of Northern Command which is living up to its slogan of “We Can, We Care.”

“We Can” represents the might of the hard power, while “We Care” reflects its soft power and goodness of will.
It is hoped that the people of Kashmir, especially the youth who have to build their career and their future will take full advantage of the outreach of the Indian Army and the Government at the central and the state level.