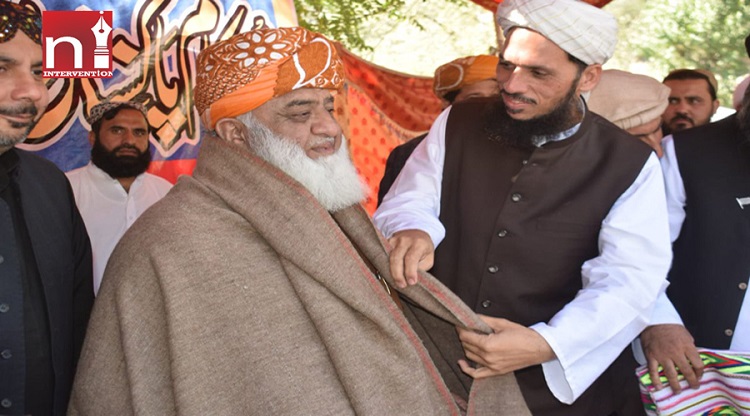 Imran Khan’s political outfit Pakistan Tehreek-e-Insaaf is backing a former head of Afghanistan Taliban for a reserved seat-Ulema-e-Mashaik-in the legislative assembly of Pakistan-occupied Kashmir (POK) to further Rawalpindi’s strategy of spending Islamic extremism across Jammu and Kashmir and Ladakh. Mazhar Shah Saeed alias Abdullah Shah Mazhar was the Taliban chief in Afghanistan’s province, who along with PTI’s POK secretary general Abdul Majeed Khan field the nomination papers on PTI’s ticket for the seat of Ulema-e-Mashaikh.

Mazhar shah Saeed alias Abdullah Shah Mazhar hails from the Lawat area of Neelam valley. He live in Karachi for a long time where he served as the Khatib in a local mosque. In the past, Mazhar Saeed Shah was actively involved in the ‘Afghan Jihad’ and has also held important positions in a province of Afghanistan in the Taliban hierarchy since the fall of Dr. Najib’s (Mohammad Najibullah) government in Kabul. Mazhar Saeed started his ‘Jihadi’ journey from the banned terrorist organization Harkat-ul-Mujahideen and later on held important positions in another banned terror outfit Jaish-e-Muhammad under the tutelage of Mulana Masood Azhar.

In 2008, a terrorist named Riaz Hussain was killed during operations by the Indian security forces on the Indian side of Jammu and Kashmir. This terrorist Riaz Hussain was operating under the instructions of Mazhar Saeed Shah, who in turn was connected with the Islamic extremists of Jaish-e-Muhammad from Pakistan’s Sindh province.

IN 201, Al-Furqan was created after the United States added Jaish-e-Muhammad and other organizations to its list of the terrorist organizations Mazhar Saeed Shah was also a part this Al-Fuqran. Later, Mazhar Saeed Shah had differences with Mulana masood  Azhar, after which he formed an organizations called Tehreek-e-Ghalba-e-Islam. In 2011 he joined the jamiat Ulema-e-Islam and contested the elections in Pakistan occupied Kashmir from Neelam Valley, but lost.

When Pak Army announced the July 26 elections in POK, Mazhar Saeed announced that he was joining the Muslim Conference. However, when Mazhar Saeed was denied a ticket, he went ahead to join the All J&K Jamiat Ulema-e-islam Mahmood AL-Hassan group. This organization was formed by rebelling against Maulana Fazlur Rehman.

Interestingly, Mazhar Saeed has been missing for sometime. He was rumored to be in the custody of authorities, but after a long period of detention he was released after becoming physically very weak.

Mazhar Saeed Shah’s elder brother Mufti Abul Baba Shah Manzoor is a teacher in Jamia Al-Rasheed, Karachi. Jihadis who started writing about extremism from Pak after the establishment of the Talibani govt in Afghanistan are among the regular writers of the weekly magazine Zarb-e-Momin, Mufti Abul Baba Shah Mansoor has also written several books incl ‘Dajjal’.

The nomination of radical Islamic extremist such as Mazhar Saeed Shah for the reserved sear of Ulema-e-Mashaykh in POK reflects the thinking of Rawalpindi and Islamabad. Readers must remember that Imran Khan has been accused of being an open supporter of Taliban in the past, which earned him the title ‘Taliban Khan’

Statements made by federal Foreign Minister Shah Mahmood Qureshi and other government official following Taliban’s advance after the US withdrawal from Afghanistan, as well as news released by the state news agency has further softened Islamabad’s attitude towards Taliban.

It’s clear that Rawalpindi and Islamabad have made it a state policy to unleash Islamic extremists in Pakistan-Occupied Kashmir and Gilgit-Baltistan in order to disturb the peace and harmony on Indian side of Jammu Kashmir and Ladakh. If this spread of Islamic extremist is not nipped in the bud then the oppressed, downtrodden and working class people of Jammu Kashmir and Ladakh will bear the brunt and be the victims of mindless violence. The ruling classes have benefited from every crisis, including Islamic terrorism, barbarism, destruction, devastation and natural disasters. The sufferers, if any, are only the working and middle class. The intelligentsia and civil society members of Pakistan-occupied Kashmir (POK) say that the main tactic of Pakistan Army is to destroy the culture and identity of Pakistan by cultivating the Taliban. If this happens then not only the Pakistan-occupied Kashmir (POK) will be affected but also the Indian side of Jammu Kashmir and Ladakh will be affected by terrorism