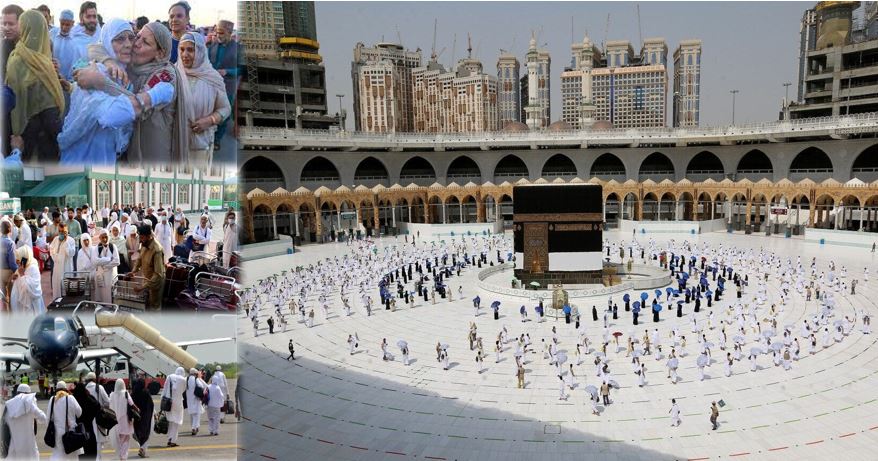 The first batch of pilgrims from Jammu and Kashmir left for Saudi Arabia on Sunday for the annual Hajj pilgrimage.

Brighter Kashmir was at Srinagar airport to witness pilgrims dressed in white arriving in Jammu and Kashmir Road Transport Corporation (JKRTC) buses. There were feelings of both joy and emotion as pilgrims gathered to have their luggage and documents checked by security and airport staff respectively.

Emotional scenes were also witnessed at the venue with some pilgrims giving their loved ones warm hugs before entering the airport for their journey to Jeddah. Brighter Kashmir spoke to some pilgrims to get a sense of how they were feeling ahead of the trip and also to ask some of them about the arrangements made for the Hajj by the authorities.

“We are going for Hajj pilgrimage after two years. We are very grateful to both the government and the local Hajj committee, most notably the Chief Executive Officer (CEO) who guided us properly and nicely. The arrangements made for this pilgrimage have been top class,” said one pilgrim.

Faiyaz Ahmed Mijaz, another pilgrim, told BK, “We are very satisfied with the arrangements made, which are very good and we are happy that we are going for the Hajj after such a long interval. We will pray for the welfare and well-being of Kashmir as also for members of the Muslim community.

A woman pilgrim said, “I cannot express in words how emotional and happy I am feeling to be undertaking this pilgrimage. I intend to use this visit to seek the blessings of Allah; to ask him to forgive us for our sins, and to thank him for allowing us this rare opportunity to perform the Hajj. It is my wish that everyone, including every Muslim, gets this opportunity to seek the blessings of the Almighty. The arrangements made for us pilgrims have been very good.”

Sources quoted officials as saying that there will be only one direct flight from Srinagar airport to Jeddah airport for the first five days and two flights thereafter.
All pilgrims are being tested for Covid-19 before taking the flight to Saudi Arabia.