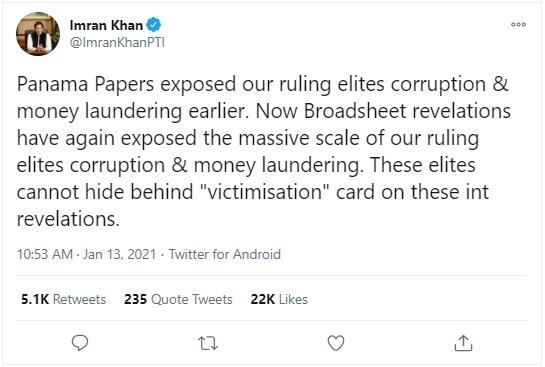 The ‘Broadsheet case’ and allegations of a bribe by towering Pakistani politicians continue to splash the media in Pakistan and still remain the focus of discussion on social media as well as most talk shows. Kashif Abbasi pointed out that both the government and opposition are busy attacking and blaming each other after this expose. The PM has blamed PML-N and Nawaz Sharif for looting the money of the country and stashing it in foreign banks; on the other hand, the PML-N denied any involvement. Linking it to Panama case, PM pointed out “After Panama, the broadsheet case has once again exposed the corruption of rich leaders of Pakistan. He asked as to why there was so much political point scoring on the broadsheet case?

Guests: Saleem Bukhari (Journalist Analyst), Irshad Bhatti (Journalist Columnist), Farrukh Habib, PTI & Mian Javed Latif, PMLN Saleem Bukhari pointed out that just like the Panama case, the battle of words between the government and opposition will continue for a long time on the latest broadsheet revelations. He underlined that there should be an inquiry about the allegations of Bribery by Nawaz Sharif that the broadsheet LLC owner Kaveh Moussavi exposed in the press conference, however, he also talked about NAB and how it asked the company to inquire about a long list of people.

Why nobody is talking about it? Also, the point that Shahzad Akbar the PTI leader’s PML-N and Nawaz Sharif for looting the money of the country and stashing it in foreign banks; on the other hand, the PML-N denied any involvement. Linking it to Panama case, PM pointed out Panama negotiation with his company, all these should be discussed in the open.

Farrukh Habib pointed out that the new thing in this broadsheet case is that the list of lies of Nawaz Sharif has increased. Money laundering was done by Nawaz Sharif and he and his family was the beneficiary. PM is trying that the wrong decisions of the past governments should not be the reason for tax and price inflations. PML-N has many frontmen and in this broadsheet case too they will try to pass the buck on someone.

Mian Javed Latif argued that although the broadsheet has named many others the government will target the PML N just like in the Panama case there were almost four hundred names but only Nawaz Sharif was targeted viciously. He pointed out that the foreign funding case against Imran Khan is pending for six years, can the government reveal its status. Can we blindly trust someone from the UK blaming any Pakistani? Why there is so much discussion in Pakistan over this issue? PM can’t hide behind the broadsheet case to save his selected government.