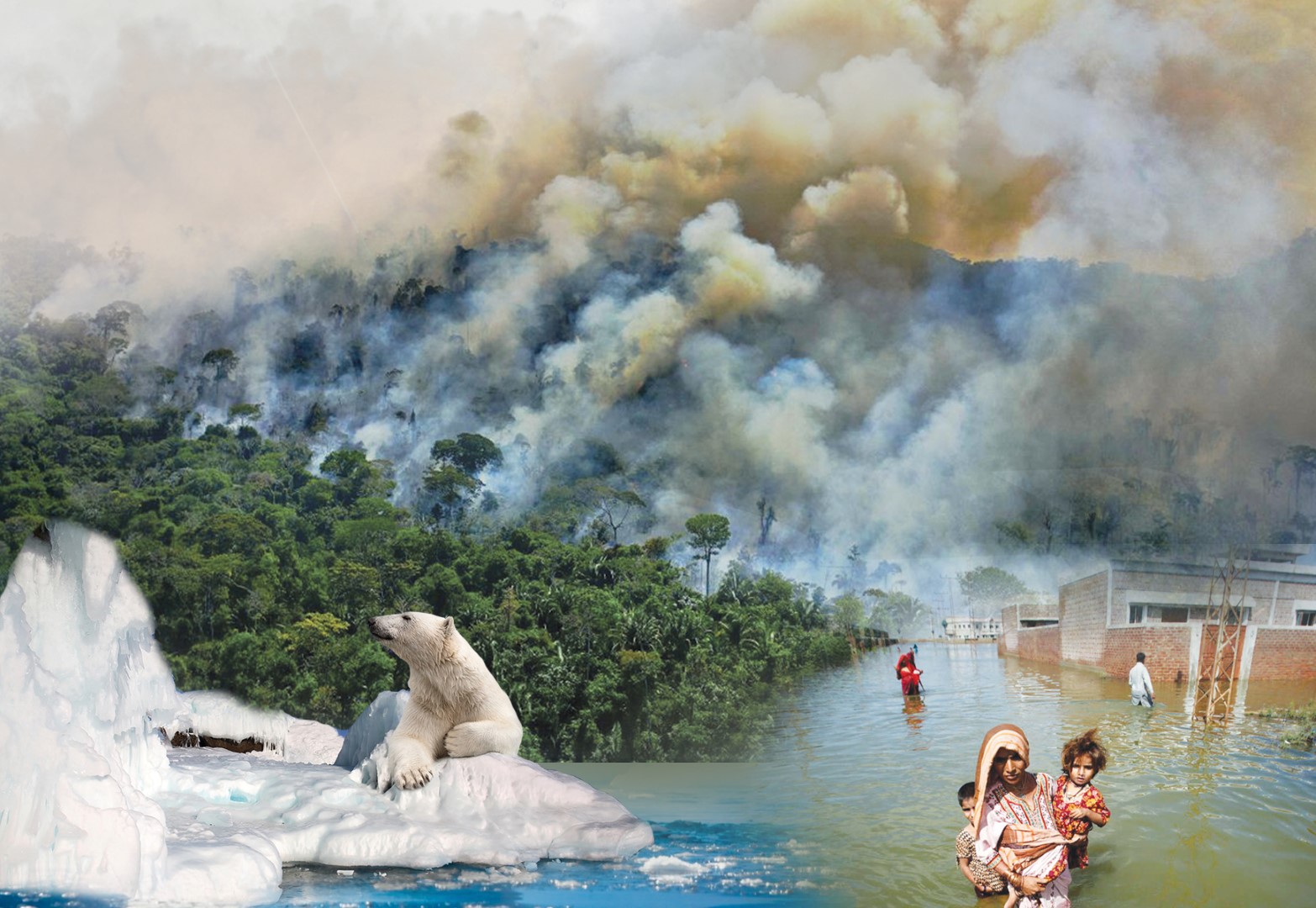 COVID-19 is far less dreadful than the Great Famine of 1315 and the Black Death of 1347; the former ended the period of growth and prosperity and caused millions of deaths, and the latter killed almost half of Europe’s population. But these worst episodes of plague and starvation pale in comparison to the foreseeable impacts of climate change. Scientists claim that the adverse effects of climate change are so great that they cannot be equated even with the fallout of a nuclear war. God forbid, if the global temperature rises by 5°C, we are likely to come across the sixth mass extinction, at par with the catastrophic demise of the large dinosaurs 65 million years ago.

Global warming which is the backbone of climate change, if it persists with the current rate, as many as one in six species could be at the risk of extinction/extermination by the end of this century. The golden toad of Central America has already vanished. The orange-spotted filefish, the quiver tree, the polar bear, the Adélie Penguin, the Indus River Dolphins of Pakistan, the North Atlantic cod and coral worldwide are some of the endangered species.

These effects are being seen around the world, though the threat is much higher in certain sensitive regions (including Pakistan and India). Unlike past mass extinctions, caused by events like asteroid strikes, volcanic eruptions, and natural climate shifts, the current crisis is almost entirely caused by humans. Extinction risk does not just increase with temperature rise, but accelerates, curving upward as the Earth warms.

The World Meteorological Organization says that the global temperature has already increased by 1.1°C since the pre-industrial age (1850-1900). And according to the most widely known and discussed “Stern Review” on the Economics of Climate Change (a 700-page report released for the British government on October 30, 2006) by Professor Nicholas Stern, there is a 75% chance that global temperature would rise between two and three degrees Celsius. However, in 2013 Nicholas publicly stated that he had underestimated the risks and that he now believes the world is on track for a four-degree rise in temperature, and if that happens hundreds of millions, probably billions, of people would have to move. It is predicted (by the International Bar Association) that there could be as many as 200 million climate refugees by 2050.

According to the United Nations, each of the last four decades has been hotter than the last, and the current decade (2010-2019) has been the hottest in recorded history. As per the World Meteorological Organization: “Oceans are now at their highest recorded temperatures, a quarter more acidic than 150 years ago, threatening vital marine ecosystems upon which billions of people rely for food and jobs. The global mean sea level reached its highest on record, fueled by the 329 billion tonnes of ice lost from the Greenland ice sheet in 12 months”. More than 20 million people have been displaced in the last year (2019) alone because of extreme weather events such as heatwaves, wildfires, and droughts, etc. The following are some of the disastrous impacts of global warming, as observed by scientists:

The impacts of global warming are not based on speculations and weak probabilities. In fact, the scientific community has been able to measure and quantify precisely what will happen if the temperature rises as a direct consequence of global warming.

For instance, in 2005 parts of the Amazon basin experienced the worst drought in one hundred years. In 2010, it underwent more severe drought (the affected region was approximately 3 million square kilometers of rainforest, compared with 1.9 million square kilometers in 2005). In a typical year, the Amazon absorbs 1.5 gigatons of carbon dioxide; instead, it released 5 gigatons and 8 gigatons in 2005 and 2010 respectively. Additional severe droughts occurred in 2010, 2015, and 2016.

According to the Woods Hole Research Centre (which has been declared a world’s top climate change think tank for 2013, 2014, 2015, and 2016 by the International Center for Climate Governance) results, the amazon rainforest in its present form could survive only three years of drought. The scientists of World Wide Fund for Nature declared that the combination of climate change and deforestation increases the drying effect of dead trees that fuel forest fires. And the Brazilian National Institute of Amazonia concluded that the forest is on the brink of being turned into savanna or desert.

The Amazon as we know is a repository of ecological services not only for local communities but for the rest of the world. It is also the largest tropical rainforest that we have left in terms of size and diversity. Protecting the Amazon Basin is critical to our planet’s climate; it encompasses seven million square kilometers of the area which is home to about 16000 tree species, 40000 plant species, 2.5 million insect species, 2200 fishes, 1294 birds, 427 mammals, 428 amphibians, and 378 reptiles.

A new study to investigate how the Amazon would respond to future temperature rises, found that a 2°C rise, widely considered the best-case scenario, would still see 20-40% of the Amazon die off within 100 years. A 3°C rise would see 75% of the forest destroyed over the following century, while a 4°C rise would kill 85% of the Amazon. This will have further catastrophic effects on the climate – creating a vicious cycle, a dangerous ‘feedback loop’ since the rainforest absorbs and stores 10 to 20 percent of annual carbon dioxide emissions and supplies 6 to 10 percent of the world’s total oxygen per year.

An increase of 4°C may also melt permafrost which is permanently frozen soil, comprising 24% of the land in the Northern Hemisphere. Permafrost stores massive amounts of carbon. If it melts, at least 500 billion tonnes of carbon will be released which will make things even worse.

The atmosphere is a layer of gases surrounding the planet Earth that is retained by Earth’s gravity. The average composition of the atmosphere up to an altitude of 25 km is as under:

The greenhouse effect is a process by which thermal radiation from a planetary surface is absorbed by atmospheric greenhouse gases, and is re-radiated in all directions. Since a part of this re-radiation is back towards the surface and the lower atmosphere, it results in an elevation of the average surface temperature above what it would be in the absence of the gases. Greenhouses gases are:

Earth is a rare planet to have a moderate greenhouse effect which is essential to support the complex patterns of life. Or else the planets with very little greenhouse effect are too cold for the survival of life, for instance, Neptune’s mean surface temperature is -200.15°C. And the planets with abundant greenhouse gases are too hot to live on, as in the case of Venus where the average temperature is about 456.85°C. The ranking of greenhouses gases by their direct contribution to global warming is as under:

The current episode of Global Warming is attributed to increasing emissions of greenhouse gases, CO2 in particular, into Earth’s atmosphere because of the human-induced interferences. As per the data for the past 2000 years, the increase in global annual mean concentrations of CO2, CH4, and N2O – three important long-lived greenhouse gases has increased substantially and dramatically since 1750. According to the United States Environmental Protection Agency (EPA), figures of increase in greenhouse gas concentrations since the industrial revolution (as of 2016) are as under:

According to an estimate provided by the Energy Information Administration, 86.4% of the global energy requirement by 2007 was met from fossil fuels (petroleum 36.0%, coal 27.4%, and natural gas 23.0%). Fossil fuels contain high percentages of carbon (other more commonly used derivatives of fossil fuels are kerosene and propane). The burning of fossil fuels is the major reason for increase in greenhouse gas emissions, carbon dioxide in particular.

The world population has risen from 2 billion to an alarming 7 billion during the last 100 years or so. More people mean more requirements for energy and more utilization of carbon emitting fossil fuels to meet that requirement. More people also mean more breathing wherein oxygen is inhaled and carbon dioxide is released by human beings. To add insult to injury, deforestation and forest degradation have decreased the planet’s natural carbon sink as trees are the major agents that extract carbon dioxide from the atmosphere and release oxygen therein, through the process of photosynthesis. Ten most populous countries in the world are China, India, USA, Indonesia, Brazil, Pakistan, Nigeria, Bangladesh, Russia and Japan.

In broader terms “Deforestation” is the clearing of trees, transforming a forest into cleared land, and “forest degradation” is a reduction in the capacity of a forest to produce ecosystem services such as storage of carbon, the release of oxygen, and provision of wood products. According to the World Wildlife Fund (WWF), deforestation has caused an estimated loss of 13 million hectares of forests between 2000 and 2010. And as per the Intergovernmental Panel on Climate Change (IPCC), deforestation and forest degradation are the second leading causes of human-induced greenhouse emissions following fossil fuel combustion, accounting for over 15 to 17% of global carbon dioxide emissions. Following are the countries with the highest deforestation in the world:

The detail of greenhouse gas emissions by source is as under:

All individuals, teams, organizations and governments must facilitate the following actions by providing resources, imparting skills and creating enabling environment (for efficient use of skills and resources) to stop the human-induced interferences that lead to global warming: