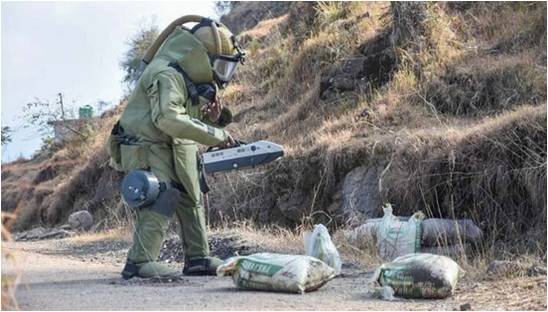 Dangerous explosives like RDX are being transported from Pakistan to Punjab in India and on to other parts of the country, police said after questioning the four suspected Khalistani terrorists who were arrested in Haryana’s Karnal earlier this week.

During questioning, the accused revealed that so far, explosives, weapons and grenades received from Pakistan via drones were delivered to three places. The first was the Amritsar-Tarn Taran highway, where Improvised explosive devices (IEDs) and arms were placed. The second consignment of IEDs and grenades was kept on the Nanded-Hyderabad highway.

On their third run, the alleged terrorists were caught with explosives and arms in Karnal, while on their way to Adilabad in Telangana on Thursday.

The accused received money by selling the drone-delivered drugs to a dealer in Punjab, while the explosives, arms and ammunition were delivered to the assigned places.

Karnal Police have launched a search for the hawala operator and the major drug smuggler in Punjab who were coordinating the illicit operation.

Earlier, Delhi Police had recovered IEDs from the national capital and Uttar Pradesh in two terror-related cases. They had discovered that the explosives recovered from the terrorists had first reached Punjab from Pakistan and then sent to the operatives.

“Foiling a major terror plot, four suspected ‘Khalistani’ terrorists on their way to Telangana to deliver explosives were nabbed in Haryana’s Karnal on Thursday and arms, ammunition and IEDs were recovered from their vehicle.”

The four suspects were identified as Gurpreet, Amandeep, Parminder, and Bhupinder, all residents of Punjab. They have been booked under Explosive Substances Act, 1908 and sections 25, 54 and 59 of the Arms Act.

How Militants in Kashmir Valley Robbed Me of My Childhood