From K FILE: THE CONSPIRACY OF SILENCE 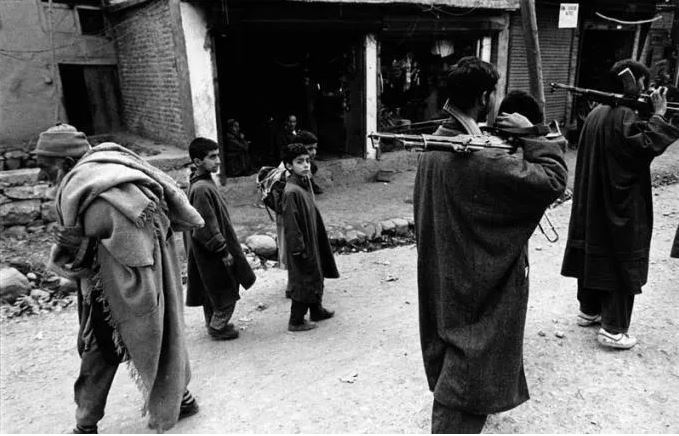 Exodus of Kashmiri Pandits
The unfortunate exodus of Kashmiri Pandits in 1990 had a major impact on how Kashmir’s contemporary identity was defined and shaped. The exodus subjected the entire community to the worst kind of human tragedy. It also changed forever the political identity of Kashmir valley. In its fight against the autocratic Maharaja rule, Kashmir had asserted a political identity which transcended narrow religious limitations. This identity was shaped by Kashmir’s secular cultural ethos, which had laid the foundations for an inclusive, pluralistic society.

Even though the Muslim identity was politicized first, it did not define the politics of Kashmir. The leadership at that time decided consciously to strengthen the social fabric by asserting the politically inclusive identity. This was resisted by Mullahs in Kashmir and Panjabi Muslims in Jammu region. They could not succeed in diluting this inclusiveness of Kashmir politics. When militancy erupted in 1990, it dealt a blow to this inclusive character. The question which pits Kashmiri Pandits against Kashmiri Muslims is this: Who was responsible for the mass exodus of an entire community which seems to have lost its home and hearth forever. Kashmiri Pandits blame Kashmiri Muslims, particularly militants. On the other hand, the popular narrative among Kashmiri Muslims about the exodus is that Governor Jagmohan drew them out under a sinister plan to bulldoze Kashmiri Muslims. Kashmir’s politicians, particularly the ruling class, could have connected the dots regarding the exodus. They conveniently remained silent on the issue at critical times. They speak about it occasionally now, but not in context. The politicians too held Jagmohan responsible for this act, whenever they spoke from political platforms.

Kashmiri Pandits have consistently rejected the theory that there were government plans behind their exodus. They insist that they were forced to leave by the militants and their over-ground supporters. Sometimes the debate over the exodus becomes so murky that it overshadows the conflict. The question of who benefitted from the exodus sometimes takes centre stage. Reservation for Kashmiri Pandits in government jobs, reservation for their children in educational institutions across the country, monetary relief, salaries and other benefits – these figure in the debates both in and out of Kashmir on the issue. Kashmiri Pandits speak of what they went through, and how difficult their life was. The debate over exodus is highly polarized and political, bereft of the human angle.

Even the literature that has been written since 1990 by writers from both communities is often prejudiced, biased and communal. It never speaks of the tragedies and sufferings of the other community. Post militancy, Kashmir produced a host of writers from both communities. They confined themselves to their respective communities. They did not speak about how the collective conscience of the Kashmir society was hurt by violence beyond redemption. There is a trend among Kashmiri Muslim writers. Each one would take an orphan to the grave of his father killed by Indian security forces, and make the child cry. The orphan is stimulated to stay at the grave of his father to forever cry, wail and mourn. He is not inspired to leave the tragedy behind and move forward in life. Writers compete in making people cry and mourn. The same pattern is followed by most Kashmiri Pandit writers. The invisible hands behind the exodus are debated more than the return of the Pandits to Kashmir.

It was a strange stroke of fate that during this critical period of Kashmir history, Mufti Muhammad Sayeed was India’s Home Minister. He served in this capacity from December 1989 to November 1990. At that time, Dr Farooq Abdullah was the chief minister of Kashmir. He was also Mufti’s chief political rival. In order to weaken Farooq politically, Mufti Mohammad Sayeed influenced Prime Minister V.P. Singh to appoint Jagmohan as the governor of the state. Jagmohan had dismissed Dr Farooq Abdullah in July 1984, in his previous stint as Governor. Farooq was not on good terms with Jagmohan. Mufti knew that the appointment of Jagmohan as Governor would irritate Farooq and make him quit. Farooq had earlier publicly stated that he would quit as chief minister if Jagmohan was made the Governor. But the Central government went ahead. Jagmohan was appointed as the Governor of Jammu and Kashmir on the night of January 19, 1990. Farooq resigned the next day.

The Rajiv-Farooq accord of 1986 also had a significant political impact on Kashmir.

GM Shah’s government was dismissed on 12 March 1986, by Jagmohan during his first stint as the Governor of Jammu and Kashmir. Shah’s government was dismissed following communal riots in south Kashmir. Farooq was made caretaker chief minister to supervise the elections scheduled for the next year. The accord didn’t sit well with Mufti, who at that time was Tourism Minister in Rajiv’s government. Mufti was waiting for an appropriate opportunity to sabotage the accord. The Meerut riots of 1986 provided him the opportunity.

Mufti resigned from the union cabinet in what he termed as his protest against the mishandling of the Meerut riots by the government. Back in Kashmir after his resignation, Mufti addressed a public rally at the sports stadium in Anantnag. There, he invoked Islam and said that he stood for the safety and security of Muslims. During his time as chief minister, GM Shah had sparked communal passion in Jammu by building a mosque close to a temple. From Mufti’s perspective, the Rajiv-Farooq accord meant another six-year term for Farooq Abdullah as chief minister of Jammu and Kashmir. Mufti had been making overt and covert efforts since long to see himself in the chief minister’s chair. Now the CM office seemed out of his reach again.

Mufti had also realized that the Congress in Kashmir valley was not strong as far as the number game was concerned. Staying in the Congress, Mufti wanted to change the discourse in Kashmir from secular (represented by Sheikh Abdullah and later his son) to religious. This is why he had convinced Jamaat e Islami in 1972 to contest the elections. Mufti’s calculation was that though Sheikh was a secularist, he was equally popular on the religious platform. Mufti’s objective was to somehow dilute Sheikh’s monopoly over the religious platform (which was till then the traditional Sufi form of Islam) to create space for himself. After addressing the public rally at Anantnag, Mufti went to his hometown, Bijbehara, to mobilize his workers for some cynical plan. There was tension in Jammu over the construction of a mosque near a temple. With Mufti’s tacit approval, some temples and other Pandit properties were set ablaze in Bijbehara, Anantnag, and Shopian in South Kashmir, and Sopore (hotbed of Jamaat e Islami) in North Kashmir.

The state went into elections in 1987 and Dr. Farooq Abdullah made a comeback. The elections are considered the most controversial in Jammu and Kashmir. Allegations of massive rigging put a question mark on the authencity of the results. Come 1989, the valley was in the middle of a violent uprising. We must try to understand the exodus of Kashmiri pundits from two angles to put things in context. One: Was there any link between the vandalisation of Pandit properties in 1986 in some select areas of Kashmir, and the exodus of 1990? Was the agenda of exodus set in 1986? Or did the exodus happen with the inception of militantcy? It is known in Kashmir that Mufti engineered the 1986 vandalisation of Pandit properties. Come 1990, he was the Home Minister of India. Mufti is the only common link between 1986 and 1990. It may have been a mere conincidence. This remains a subject of investigation.

Let us consider the opposing narratives of Kashmiri Pandits and Muslims. KPs have consistently and unequivocally stated that they were driven out of their homes by the Islamic militia and their overground sympathizers. Muslims maintain that it was Jagmohan who drove them out. To me these are the two glasses half-full. Maybe we should pour them into one. It will be injustice on the part of Kashmir Muslims to blame Jagmohan for everything that happened. Hundreds of incidents can be quoted as testimony, which will make it abundantly clear that militants and their overground sympithizers threatened, maimed and killed KPs in good numbers, taking into account their ratio in the population.

If some Bajrang Dal goons shout in New Delhi, ‘Ek dhakka aur do, Jamia masjid tod do’, it is seen as an obvious threat to Muslims in Delhi. Shouting ‘Yahan kya chalega, Nizam e Mustafa’ equally tantamounts to a threat for the Pandits. It is true that militant commanders and Jamaat leaders would give sermons in mosques, asking Pandits to stay back as second class citizens. Then there were criminally-minded men who would knock at the doors of Pandits in the dead of night to threaten them for various reasons, other than those stated by the militants. No Kashmiri Muslim can deny that every Pandit household was threatened in one way or the other by militants or criminally-minded men who had their own agenda. Most of them wanted to occupy the properties of Pandits by hounding them out. The Pandits were first targeted by Jammu Kashmir Liberation Front (JKLF) militants. This was time when a significant number of Pandits may have decided to side with the new narrative of Azadi. JKLF took no time in threatening them and hounding them out of the valley. Soon Hizbul Mujahideen, backed by Jamaat-e-Islami, emerged on the scene. Cries for Nizam-e-Mustafa resounded. Was it not reason enough for the Pandits to leave? Or were they too supposed to shout ‘Yahan kya chalega, Nizam-e-Mustafa’?

Now for the charges that Jagmohan drove them out. I would say Mufti drove them out by engineering activities that caused them to fear for their lives. I have referred elsewhere to the comment made by the Home Secretary to the J&K government, who wished Geelani a long life because he was helping the Indian state so much. Those who drove out the Pandits did not know they most damaged the cause of Kashmir, and helped the Indian state to the hilt. Jagmohan perhaps arranged the logistics and helped the Pandits to move out of Kashmir at a point when they were totally unsafe, and felt threatened. Kashmiri Muslims cannot exonerate themselves of the responsibility that the Pandits had to leave their homeland. We should accept it, apologize for it and ask the Pandits to return back to build Kashmir collectively. The terrorists who emerged as leaders always maintained that they were ready to welcome Pandits back with open arms. Shabir Shah was among the first few youngsters who, along with only a few of his workers, hounded Pandits out of Anantnag. Shah would later visit migrant camps in Jammu in solidarity with Pandits, and would issue statements asking them to return. Kashmiri Muslims by and large want the Kashmiri Pandits back. The political class has done politicking on the issue, and has never been serious about their return.

What The Loss Of Kashmiri Pandits Has Meant For The Valley
The Kashmiri Pandit youth suffered immensely following the mass exodus. Uprooted from their homeland, they had to face very difficult situations. They could have easily produced a huge militia. That did not happen. The Kashmiri Pundits focused on education and became part of the Indian mainstream, benefitting in diverse ways. This whole gamut must be examined from the local perspective. After the exodus of Kashmiri Pandits in the early 90s, Kashmir is now largely homogeneous society. The pluralistic character of Kashmir society is now a thing of the past. While the Kashmiri Pandits were here, the competition was for better education. The happy intermingling of Kashmiri Muslims and Pandits have few parallels in the world. But a positive competition was always there.