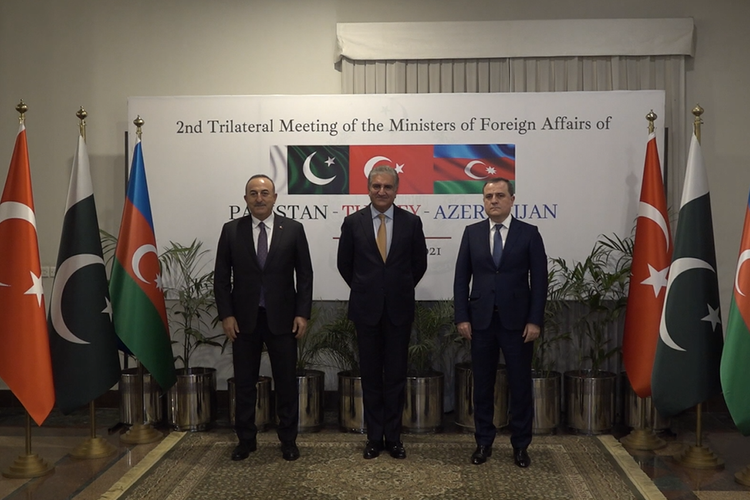 The Foreign Ministers of Pakistan, Turkey, and Azerbaijan, while expressing concern over the grave human rights violations in occupied Jammu and Kashmir and the growing trend of Islamophobia, have agreed to adopt a joint strategy to protect Islamic values. Foreign Minister Makhdoom Shah Mehmood Qureshi, Foreign Ministers of Turkey and Azerbaijan participated in the second trilateral talks along with their delegations. After the talks, the three Foreign Ministers signed a joint declaration. The declaration pledged to enhance cooperation on transport, trade, energy, people-to-people contacts, education, social and cultural exchanges, tourism, and ICT.

The world is changing from a unipolar one to a multipolar one with multiple regional, trade, and strategic partnerships. The recent trilateral talks between Turkey, Azerbaijan, and Pakistan are a link in this chain. Turkey and Pakistan stand side by side in all regional and global affairs. Relations between Turkey and Pakistan have been stable for 73 years. Turkey has stood by us on the Kashmir issue. It is also supporting Pakistan fully on the issue of FATF. The recent meeting of the Foreign Ministers reaffirmed their commitment to develop ties further and advance infrastructure projects.

The relations between Azerbaijan and Pakistan are not hidden from anyone. The Foreign Ministers of Pakistan and Azerbaijan also agreed to make joint efforts to promote cooperation in the fields of bilateral trade, agriculture, education, industry, and technology. Pakistan has close friendly relations with Turkey and Azerbaijan and the trilateral relationship has created an atmosphere of mutual trust. The talks focused on trade, investment, and security, as well as strategic and political co-operation. There is no doubt that the three countries share a common vision and common interests on a number of issues. Azerbaijan has deep fraternal ties based on common cultural, religious, and historical values. The Afghan peace process was also discussed.