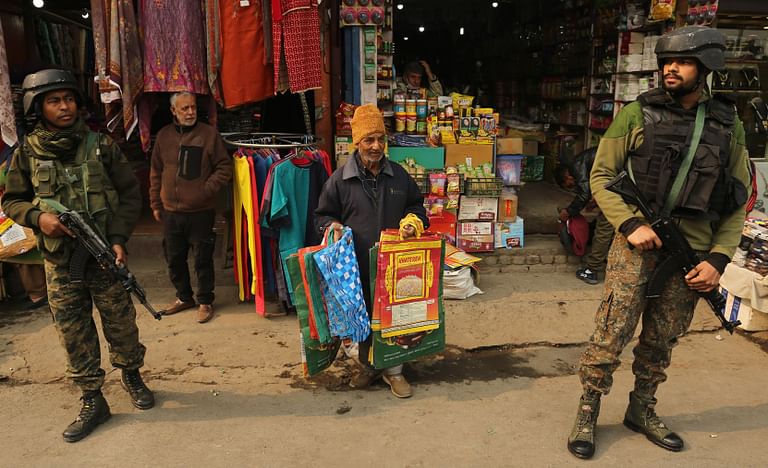 Srinagar: The administration tightened its grip over the situation in Jammu and Kashmir allowing very little political activity in 2021 but the draft proposal of the Delimitation Commission to give more seats to the Jammu region briefly threatened to disturb the semblance of normalcy.

Protests, which were almost a daily fixture in the political spectrum of Kashmir, have nearly disappeared from the horizon and civil administration does not approve any requests for large assembly while the heavy deployment of Police and paramilitary forces ensures that no spontaneous demonstrations break out.

Political observers feel that the large-scale use of UAPA and Public Safety Act against dissenters has led to calm, which might be temporary in the long run.

With armies of India and Pakistan agreeing to a ceasefire along the Line of Control (LoC) in February, the guns along the border areas fell silent.

As security forces eliminated most of the top leadership of the militants in Kashmir, many would have believed that the situation was almost peaceful in Jammu and Kashmir.

However, things took a dramatic turn in October as the gunmen started targeting unarmed civilians.

Nearly a dozen persons were killed by the militants, the security forces upped their operations but questions were raised on the genuineness of the encounters.

One such encounter – that took place at Hyderpora in November – drew national and international attention after it came to light that at least two of the three locals killed in the operation were not linked to militancy.

For the first time since the abrogation of Article 370, Police were forced to return the bodies of slain men they had dubbed as Over Ground Workers (OGWs) of militants.

In the wake of the COVID-19 outbreak, Police started burying the bodies of militants in remote areas of north Kashmir with only close relatives of the deceased allowed to take part in the final rites.

Shah’s visit came in the backdrop of rising civilian killings by militants.

The home minister’s visit was high on symbolism as he addressed several constituencies during his extended four-day visit to J&K.

He sought to boost the morale of paramilitary forces as he spent one night each in a BSF camp (in Jammu) and a CRPF camp (in the Pulwama area of Kashmir).

He also paid tributes to the 40 CRPF men killed in the suicide bomb attack at Lethpora in Pulwama district in 2019.

After over two years of curbs, the political activity seemed to pick up towards the last quarter of the year with mainstream political parties like National Conference, Peoples Conference, and Apni Party holding rallies and workers’ conventions across J&K.

While PDP also did the same in the Jammu region, it failed to get permission from authorities most of the time when it tried to hold similar events in Kashmir.

The politicians believe that the easing of curbs on political activity was due to the government’s realisation that it cannot hold down dissent by force too long.

“It was due to the farmers’ agitation that the government has relented a bit but the activity is still nowhere near it should be in a vibrant democracy,” senior CPI (M) leader Muhammad Yusuf Tarigami said.

National Conference spokesman Imran Nabi Dar said that the results of the District Development Council elections were also in part responsible for the lifting of curbs.

“There was a general realisation following the DDC elections that they cannot put down dissent by force for too long. People will speak whenever they are given a chance,” Dar said.