Farooq Abdullah under attack for involving China in Kashmir issue 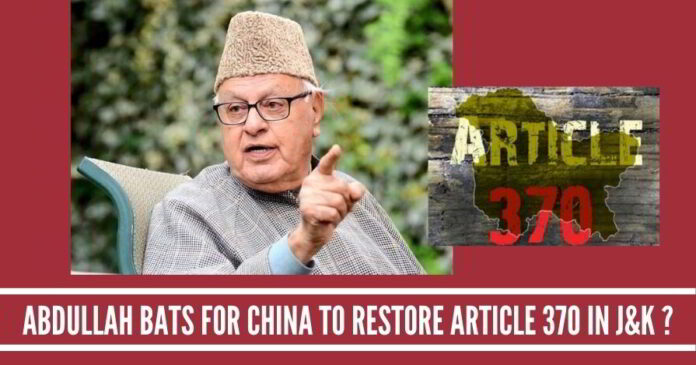 Abdullah and Mufti families of Kashmir established relations with India to perpetuate themselves in power. While doing this, they discounted India’s anti-Muslim policies. Under the patronage of Indian forces and the state government, the local police unleashed havoc on Kashmiris. Many unnamed graves were discovered later. But the local puppet rulers would ignore all this. They never felt the pain like a common Kashmiri.

Even after 14 months, there is hardly any relief to Kashmiris. Media blackout continues. The number of Indian forces has increased to over nine lakh. When local jails were full, many Kashmiris were sent to jails outside the state. The gravity of the situation can be gauged from the statement of former puppet Chief Minister Farooq Abdullah. Of late, Farooq has been repenting for his support to India. Earlier he had said that Jinnah was right and his ancestors had made mistakes by joining India. Like Farooq, Mehbooba Mufti is also regretting her pro-India politics. Farooq has associated hopes with China. China’s reaction has been in response to India’s policy of changing the demography of Jammu and Kashmir.

Pakistan also is doing whatever it can. It has exposed India at every international forum. The International community is condemning India’s action in Kashmir and asking for complete restoring of human rights. Just two days ago, four local youths were killed. According to a statement from the Foreign Office of Pakistan, almost over 300 Kashmiris were killed by Indian forces in the last year. China is teaching lessons to Indian forces. The supporters of India till yesterday are speaking the truth today. They should shun all relations that they have established in the past and ask for giving rights to Kashmiris.