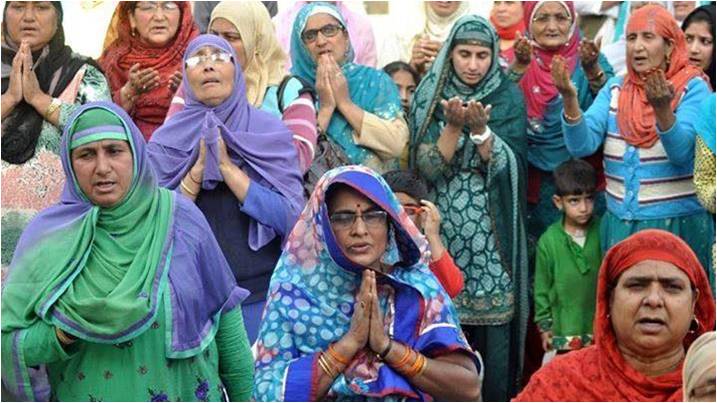 Amid targeted killing of members of the minority community by the militants, the two communities in Kashmir continue to be tied by a deep bond which cannot be destroyed by these dastardly acts of terrorism. The most significant takeaway from the recent terror attacks on Kashmiri Pandits and the pain felt by their neighbors from the majority Muslim community over such cowardly terror attacks is that the trust and faith both communities have in each other continues to shine bright.

Some Kashmiri Pandits stayed on in 1990, deciding not to leave their home and hearth when terrorists forced the entire community to leave. In interactions with KASHMIR CENTRAL over the last few days, many Pandits said they believe that the majority community in no way accords approval to the terror attacks against them. They feel that unarmed civilians are helpless, regardless of their religion or community since terrorists don’t seek approval. They only kill.

The Pandits attribute the increasing attacks on their community to many factors. Some very vocally suggest that the narrative of “demographic change” pushed by terror apologists post the abrogation of Article 370 is the reason behind such attacks.

According to this section, there are concerted efforts by those who drive the anti-India narrative in Kashmir to create fears in the minds of people against New Delhi. Terrorists draw strength from such discourse to kill the members of the minority community. There is also anger against those among the exiled Kashmir Pandits who preach and propagate hatred against the Kashmiri Muslims and hold them responsible for the exodus in 1990.

Unfortunately, growing animosity among some sections of Kashmiri Muslims and also Kashmiri Pandits is being vented out on social media. This is taking a heavy toll on the Pandits who didn’t migrate despite all odds.

Kashmir Central interviewed scores of people belonging to the minority Kashmiri Pandit community in the immediate neighborhood of those who fell to the bullets of terrorists in the recent past.

The KASHMIR CENTRAL team visited hamlets in Pulwama, Srinagar and Budgam districts where people from both communities live together. The team also visited some villages in the terrorist- infested area of Tral in Pulwama district and interviewed scores of people from the Sikh Community.

It merits mention here that at least three people from the Sikh Community fell to the bullets of terrorists in the recent past. KASHMIR CENTRAL also interviewed Kashmiri Muslims who live in the immediate neighborhood of the members of Kashmiri Pandit and Kashmiri Sikh communities.

Those who agreed to speak expressed their anguish and pain over the killings by the terrorists in Kashmir. They said that there are attempts to create hatred between the communities. They were steadfast in stating that there is a strong bonding of mutual brotherhood and harmony among all Kashmiris, which cannot be shaken by such incidents.

KASHMIR CENTRAL interviewed many people belonging to the Pandit community in Trisal, Monghama, Tahab, Vahibugh, Rohama, Chakoora and Tomlehal villages in Pulwama district. There are deserted houses and ruined structures, which give a ghostly look. They remind us of the terrible events of the exodus when the Kashmiri pandits were forced to flee from their home and hearth. Right in the middle of these deserted houses are some renovated and maintained structures. These are the houses owned by those Kashmiri Pandits who chose to stay back against all odds.

In the aftermath of the recent killings, Pulwama Police deployed a heavy contingent of cops to guard the villages where there is Pandit population. The cops keep a close vigil on those passing through these places. The Kashmir Central team was allowed to go into these villages only after proper frisking and checking of identity cards.

‘WE HAVE CO-EXISTED FOR CENTURIES’

At Tomlehal village, some Kashmiri Pandits said that they are not happy with the deployment of police guards. They said that their intention is not to create hurdles for the police, but police deployment creates physical and psychological barriers. “We live happily with our neighbors from the Muslim community. They are the ones who stand by us through thick and thin. We have co-existed with them for centuries, and we need them more than anything else,” said an elderly Kashmiri Pandit who did not wish not to be named. “Our bond is rock solid. We don’t differentiate between ourselves. We are one,” he said.

At Chakoora, the KASHMIR CENTRAL team found Pandits and Muslims busy discussing the record rise in temperature during April, which otherwise pleasant in Kashmir. They said that the bonhomie between the two communities has no parallels. “We are emotionally attached to each other. We don’t differentiate between ourselves,” they echoed in one voice. “We live happily with each other. There is only love and affection, and that is our religion,” said members of both communities.

A Pandit whom the KASHMIR CENTRAL team met in Rohama village said that the centuries-old Kashmiri ethos continues, and people from two communities share same the bonding.

‘OUR BOND HAS REMAINED UNSHAKEN DESPITE ALL ODDS’

In Srinagar, the KASHMIR CENTRAL team visited Solina area of Srinagar city, where Kashmiri Sikhs live in large numbers. A teacher from this area was killed mercilessly on October7 last year at Eidgah Srinagar, along with another teacher of the minority community.

Gursimran Kaur, an engineering graduate from this area told KASHMIR CENTRAL about the bonhomie between Sikhs and Muslims in the area. “First of all there is a bond between Sikhs and Muslims which remains unshaken despite highly unpleasant events over the last 33 years. There were massacres perpetrated by unidentified terrorists. In some cases the security forces were blamed for killing the Sikhs. But our faith and bond remains unshaken.

Referring to the killing of Supinder Kour, a teacher at Government Higher Secondary School, Eidgah in Srinagar on October 7, Gursimran said that the incident was horrifying, but the response of the Muslims in their neighborhood was highly noble and soul- touching. “Our neighbours were as much in grief as the family of Supinder Kour. Post Supinder Kour’ killing, the amity and brotherhood between the two communities has strengthened even more. There is a resolve from both sides to persevere and protect each other in harmony.

“In becharoon ka koi kasoor nahi. Terrorist in se pooch ka thode he aate hain. (Our hapless neighbors are innocent. Terrorists don’t seek their permission when they strike). The aged but experienced Kashmiri Pandit articulated the recent events very beautifully. “Hum khofzada hain aur ye dard main (We live in fear and they in pain because of how we are targeted). Chot humain lagti hai, dard unko hote hai (Whenever we are hurt they feel the pain),” the 67-year-old Pandit said.

The recent targeted killings have left the Pandits feeling deeply scared. A young Pandit girl said that she and her family members have no complaint against their Muslim neighbors, and that they are deeply caring. “They stand by us and share our grief and happiness. Still fear grips our village more than ever before. What keeps us going is the tenderness and innocence with which our neighbors treat us. I am telling you that they are as helpless as we are under the given situation.”