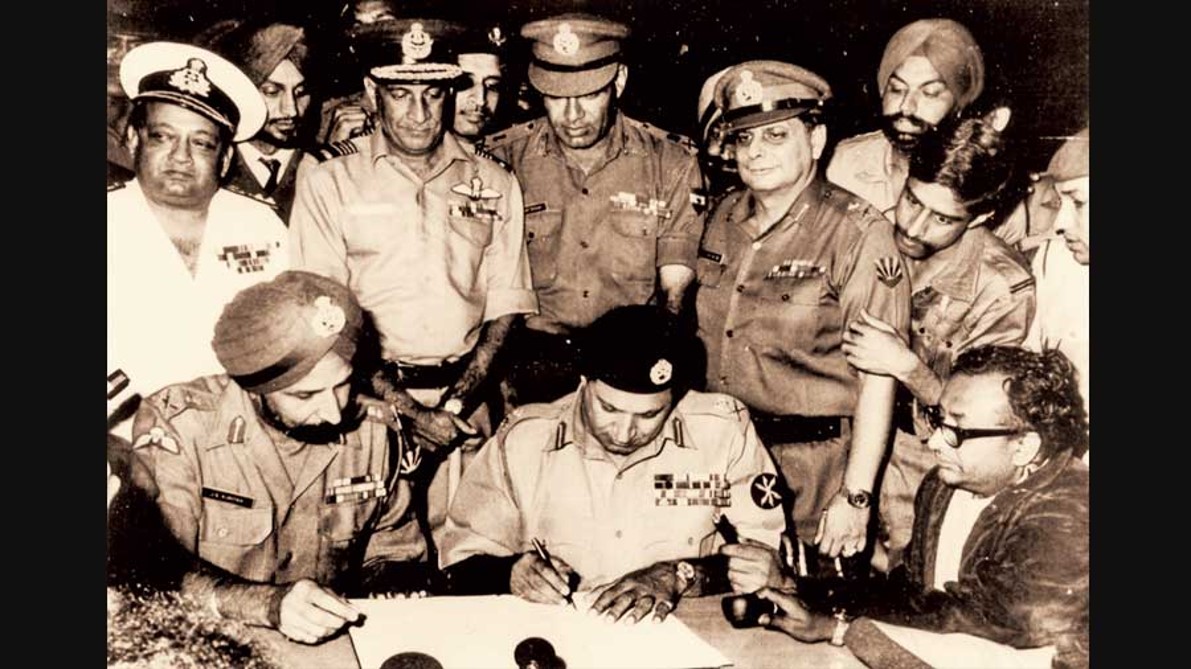 December presents contrasting images in India and Pakistan. For us in India, there is a sense of achievement, even triumph, at the successful execution of a grand strategy over the course of 1971 that significantly altered the geopolitics of South Asia. In Pakistan, 1971 presents an overwhelming sense of failure — at the institutional and the policy level, of course, but what possibly rankles most is the failure of competence and integrity at the deepest personal level of its leadership.

This December, these contrasting frames are present with an added intensity in India because it is the fiftieth anniversary of a fateful year. In Pakistan, memories appear more muted although they are there below the surface: the generation that was coming of age in 1971 is still very much at the helm and, often, early influences are the most durable. But even though some scar tissues do remain, there has been reconciliation to a large extent with what is now in the past. It is thus no coincidence that the Pakistan cricket team was touring Bangladesh till a few days ago.

Yet December remains the saddest month in Pakistan’s political calendar. For most Pakistanis, it will always remain so because one half of the country irrevocably broke away this month. There are, however, other painful memories which are more recent. December 2007 witnessed the assassination of the charismatic Benazir Bhutto. A few years later, possibly Pakistan’s worst terrorist attack to date took place — in December 2014 — with a school in Peshawar being attacked and over a hundred children shot dead.

In many Pakistani perspectives, each of these three tragedies had deep structural roots. The break-up of Pakistan happened because of a long germinating federal crisis. Pakistan’s history cupboard is full of contradictions. It was its first national election — in December 1970 — and possibly its fairest election for many years afterwards that delivered the well-known result that catalyzed the chain of events culminating in a sovereign Bangladesh.

The assassination of Benazir Bhutto and the massacre of the school children by the Tehrik-e-Taliban Pakistan also had deep structural roots, derived as they are from Pakistan’s geopolitical manoeuvring in Afghanistan. It is striking to see both in the case of its eastern wing in 1971 and now in Afghanistan for the past four decades how Pakistan’s external policies have intensified internal fissures.

The fiftieth anniversary of the emergence of Bangladesh and the break-up of Pakistan provides, in fact, a context to reflect on the change of regime in Afghanistan and the Taliban takeover. The end game of that process had much to do with the US-Taliban negotiations, which ended by exposing US incompetence and incapacity as its remaining forces and diplomats exited in disarray. Pakistan was not a direct party to these talks, but it was certainly the most important third party. Quite apart from the catastrophic consequences for the Afghan people, the collapse of the old order has added an extra burden of suspicion and mistrust to the long-strained Pakistan-US relationship. For many Americans, it is Pakistan that is to be blamed the most — not just for the political debacle the US suffered but even more so for the enormous loss of face.

There is a contrast with an earlier superpower entanglement Pakistan had found itself in concerning Afghanistan, once again. The Soviet Union, having invaded Afghanistan in 1979, was looking for a way out by the mid-1980s. Negotiations with Pakistan and the United States of America followed. Pakistan had its own distinct aims in Afghanistan but, within the limits set by this, tried to see that a minimal face-saver was made available to the Soviets. To some extent at least, the Soviet final withdrawal retained an optical semblance of order so visibly absent when the US withdrew from Afghanistan this August. It is a different matter that the story of the orderly Soviet withdrawal has been drowned out by the stronger narratives of superpower defeat following the demise of the Soviet Union.

In this sense then, Pakistan’s diplomacy came off better in 1989 than in 2021. In both cases, the country’s strategic objectives were achieved but in the earlier instance a further gratuitous humiliation of a superpower was avoided. Perhaps this contrast also gives some insights into the changes in Pakistan’s strategic culture in the intervening period. Perhaps what changed was that diplomacy yielded too much ground to securitized approaches and as the end game played out Pakistan went along with the Taliban in discarding even the façade of a negotiated settlement. How much is the downturn in US-Pakistan relations and what will be the impact of this remain to be seen. How much of this was avoidable also remains a question that at least some in Pakistan will ponder.

The gains in Afghanistan for Pakistan this year are, from its point of view, real and tangible, but there is no institution available in the country with the bandwidth to do a cost-benefit analysis of a Talibanized Afghanistan. Internally in Pakistan, both ends of its extremist spectrum seem simultaneously empowered since the change in Afghanistan: the Deobandis, at one extreme, in the form of the TTP have not renewed a ceasefire agreement with the government. At the other end are the Barelvis, long regarded as more docile and moderate. With the Tehreek-e-Labbaik at their head, they are again showing an ability to bring normal life to a grinding halt. The gains in Afghanistan seem to be working in the opposite direction, so far.

The rest of the situation in Pakistan continues in what has become the normal crisis mode. And while, in this fiftieth anniversary of 1971, its adversaries may gloat over its predicaments, there are takeaways to which its neighbours must also pay special heed. A religious fervour in mainstream politics and an excessive securitization of public narratives lie at the core of many of Pakistan’s problems — especially so in the past four to five decades. These are pitfalls which we too have to avoid.