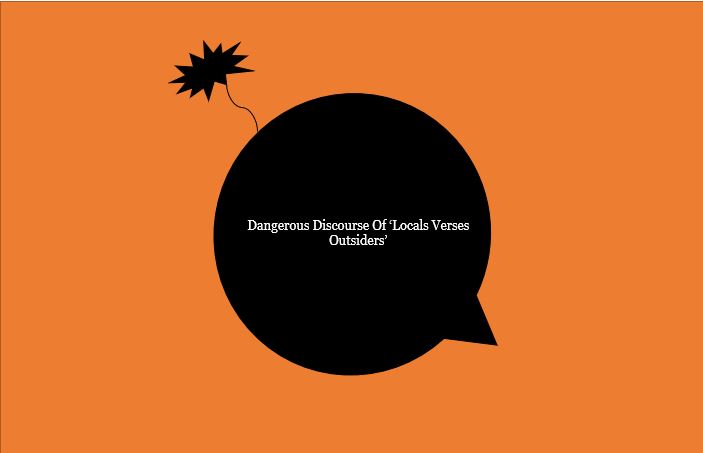 A dangerous discourse of ‘locals verses outsiders’ has been set by the political leaders of Kashmir. This is part of their venomous campaign of ‘othering’.

These same political elites earlier blamed the political class of Indian mainland for othering the people of Kashmir. The question they would pose was: “Aren’t we (Kashmiris) citizens of this country? Why are there less opportunities and avenues available to Kashmiris in mainland India?” Sometimes Kashmiris were harassed by the locals or by the police in some pockets of the country. At that time our politicians correctly questioned the othering of Kashmiris. Gradually this talk became the part of the political discourse in Kashmir. It was often exaggerated and out of proportion, but the points made were genuine. Now there is reverse othering in place. It can have dangerous consequences. Our political elites are competing with each other in this discourse of othering. This is deliberate and intentional. Their objectives are two-fold. They want to further the divisive agenda in Kashmir. And they want to create insecurities locally. There are lacunas and loopholes in the functioning of the administration everywhere – locally, nationally and globally. Power leads to arrogance everywhere. The failures and errors of judgment by the Administration compound the problems faced by the common man.

But giving this the twist of “us versus them” is a dangerous narrative – as dangerous as separatism.

Every peace-loving Kashmiri has right to work in any part of India. Any ‘othering’ of Kashmiris is reprehensible and must be condemned by one and all. The Central and respective state governments should be held responsible for any kind of discriminatory approach towards law-abiding Kashmiris. But political elites at times make dangerous comments. In September, Apni Party chief Altaf Bukhari said Kashmiris have been sidelined in the administration, and people from UP and Bihar rule Jammu and Kashmir. In the statement, Bukhari said, “You only see 22 people being terminated in Kashmir. But I think all the people of Jammu and Kashmir have been terminated. Where are they in the administration? There are scores of Kashmiri officers in police and civil administration. Where are the Muslim officers today? Who says 22 people have been terminated… I’m saying that 82 lakh people of Kashmir have been terminated. People from UP and Bihar will not govern us. No one from UP can come and educate us about the governance, we know what is happening in UP,” Bukhari told reporters after addressing the party workers.