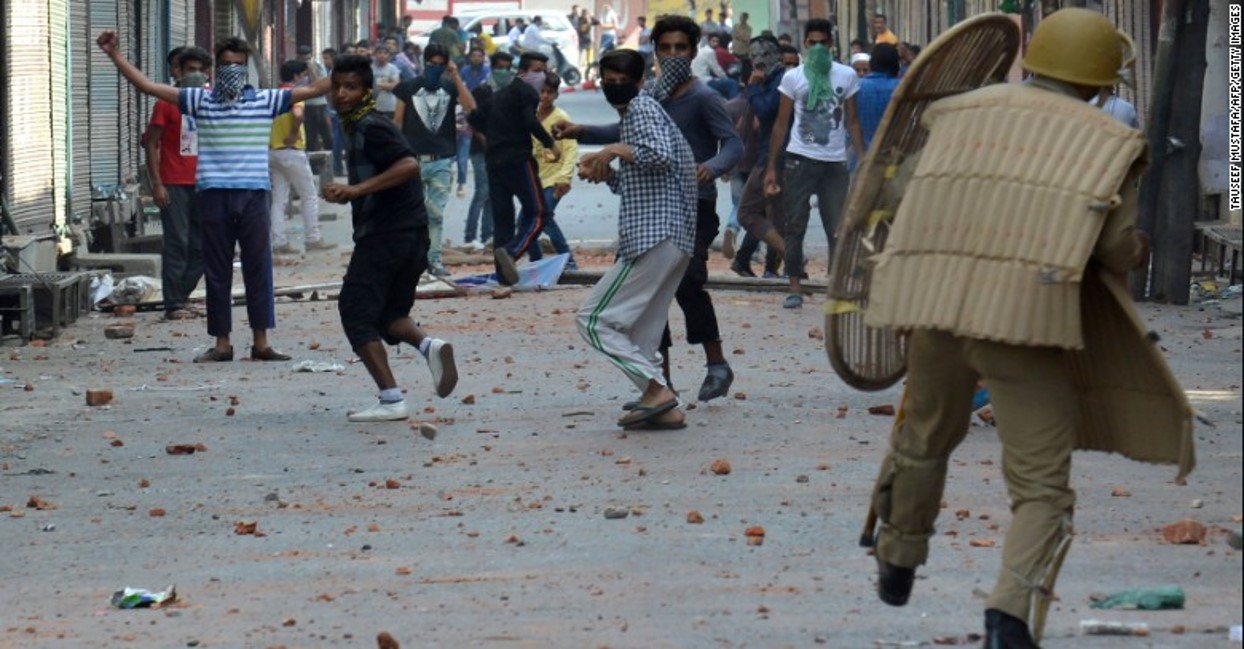 As Kashmir witnesses relative periods of peace and development, the online propaganda of new militant groups continues unabated. While the Center’s focus was towards new developments in the valley, Pakistan’s strategy of outsourcing proxy forces was renewed by the creation of new militant outfits like The Resistance Force (TRF), Kashmir Tigers, People’s Anti Fascist Force (PAFF), United Liberation Front of Kashmir (ULFK), amongst others. Despite the government’s imposition of some of the most pervasive communication restrictions anywhere in the world post the abrogation of Article 370, militant groups managed to proliferate digital communications from across the borders, bypassing enforcement measures and adopting online media insurgency tactics. Though Kashmir witnesses a lull in violence, the field remains open to organised outfits trying to create new narratives and glamourise attacks online ensuring that the terror rank swells by attracting Kashmiri youth.

This new dynamic is perceptible by the online methods of outfits such as the TRF. Strategists postulate that by presenting new outfits as homegrown movements, Pakistan hopes to evade international pressure to stop sponsoring proxy forces brought on by its Financial Action Tasking Force (FATF) grey listing. This new narrative is relevant to all new outfits in Kashmir that now emphasise on resistance as their rasion d’etre as opposed to religious war or jihad.

Dichotomy of online insurgency pre and post abrogation of Article 370

Before abrogation of Article 370 in August 2019, outfits in Kashmir crowdsourced terror online through the ‘Burhan Wani model’. The popular online content propagated by the 22-year-old top Hizbul Mujahideen (HM) commander made him a prolific social media icon amongst local youth. Wani’s immense popularity amongst Kashmiris lies partly in the efficiency with which he waged social media jihad. Portraying the life of insurgents as ‘pious’ and ‘elegant’, linking the insurgency to the broader religious identity of the state’s Muslim majority, disseminating wide anti-India narratives to radicalise youth, using online media to relay information in real time while calling supporters to co-ordinate protests, and disrupting counterterror operations are some popular tactics of Wani’s model.

Wani’s death in 2016 helped militant groups refine this model and glorify insurgency as a pathway to celebrity. The growing user base of Kashmiris on social media helped militants to promote the legitimisation of terrorism even amongst the educated classes and civil society, by humanising militants and normalising the violent aspects of insurgency. A study undertaken by the Kashmir police in 2015, suggested that out of 111 local recruits inducted into various terror groups, more than 50 percent had been radicalised through the consumption of internet propaganda. This suggests that the refined model started a new wave of digital militancy in Kashmir that gave rise to local recruitments and homegrown movements.

Nevertheless, abrogation of Article 370 forced Rawalpindi to re-strategise its efforts. New militant groups show a tactical shift in their branding, propaganda dissemination, and online networking. They portray outsourced terror as homegrown, and have increased efforts to secularise the movement in the name of resistance. The names and iconography of these outfits are also based on non-Arabic, non-religious, and non-sectarian nomenclature. Militants are termed as ‘freedom fighters’, the Indian government and security forces as ‘occupational forces’, the movement against them as ‘indigenous resistance’—reiterated through slogans like ‘Resistance till victory’ and ‘Resist to exist’, which are often used in declarations disseminated online. Many new outfits portray themselves as in direct opposition to the BJP government and the RSS-led Hindutva. Often, attacks are termed as ‘lightening strikes on Hindutva ecosystem’ made ‘in accordance with the promises made to the Kashmiri nation’. Many of these catchphrases identify new policies of the government as ‘nefarious designs of the occupier’, trying to create sectarian divide within Kashmiri society. This became evident after the attacks by TRF on 7 October 2020, when the perpetrators asked for identities to separate minorities from Muslims before they shot the two victims who were Hindu and Sikh.

Another distinctive feature of the new outfits is how they provide justifications for their attacks by associating them with the broader cause. After its attack on 7th October, TRF released a statement citing that the teachers of the school harassed students to attend the Independence Day event, and the attacks have been carried out for ‘politicising education system’ and ‘drawing it into a filthy agenda’. New militants categorically own attacks by providing justifications for each of their operations by claiming the victims to be ‘collaborators of colonial project’, emphasising on resistance against invasion and fascism over jihad. This is also an attempt by the groups to picture themselves as true representatives of the Kashmiri people, their rights, and their civil liberties. The new militancy operates with a finite objective of obstructing the integration of Kashmir into mainstream Indian society. This is evident through the ‘Strategy Note’ released by TRF in October 2020, in which it declared that it would single out non-locals; block non-local entrepreneurship, land allotments to domiciled individuals, jobs, and admissions to non-locals; and terrorise collaborators of any outsider industry’s push.

This new online propaganda also claims that security forces are falsely implicating innocent civilians, and identifies arrests and counterterror operations as means to hide failures to tackle the security situation. A large share of the content strives to defame, malign, and stigmatise security agencies by portraying countermeasures as torture, persecution and violation of rights—all aimed at delegitimising security measures in the eyes of Kashmiri citizens. For example, TRF asserts that agencies, especially the Special Operation Groups (SOGs) are inducing drug addiction into Kashmiri society to suppress the resistance. Any declaration made by the agencies citing the background of ongoing counteroperations is countered by the groups as an attempt to ‘sell false stories that fill their political appetite’. These trends show that new militant groups are downplaying the security implications of terror in the valley and portraying the ongoing situation as a political mayhem instated by the security agencies and the government.

Unlike Wani’s model, new groups maintain anonymity of its recruits as militancy is now carried out through ‘Over Ground Workers (OGWs)’ and ‘Hybrid Militants’. Recruitments are often declared through audio clips with the voice of recruits. Earlier, popularity of recruits on social media helped militants to make on-ground connections with locals. Nevertheless, new militancy witnesses change in network pathways and many outfits only exist on social media. This explains the gap between online and offline tactics of new groups working in concert with each other. In the past, militants relied on ‘integrated pathways’ of networking, in which there was heavy engagement with co-ideologies in both online and offline domains. Now, the new groups have shifted to ‘encouraged pathways’, in which online platforms are heavily relied on for networking with minimum offline contact. Nevertheless, new militancy aims to create an ‘isolated pathway’ of networking, in which individuals directly carry out attacks in the name of their associated cause, with little to no contact with the organisation, either through online or offline domains. This is evident from the frequent use of popular terms like ‘Lone Wolf’ and ‘Lone Mujahid’ via multiple statements released online. Indeed, one of the groups uploaded the ‘Lone Mujahid pocketbook’, which was released by Al-Qaeda in Arabian Peninsula (AQAP) aligned Al-Malahem Media in 2015, instigating local youth to wage a lone war against the state. This change in pathways directly influenced the operational strategy of the groups witnessed in April-May 2020, when (now deleted) TRF’s Facebook page received the highest interaction rate during which the outfit was involved in multiple armed encounters against the state. Status updates and declarations gained highest traction during this time reiterating the symbiotic nature of digital and physical violence of terror in the valley.

The new outfits manage to circumvent de-platforming by creating a façade of launching new groups. Often, groups shift from apps like Telegram to smaller platforms like TamTam and Nand Box to evade further de-platforming. Uploading a selective set of content, using body cameras to shoot attacks, and falsely claiming the attacks online are some of the other tactics used by new outfits. Further, unlike Wani’s model, online material is published through anonymous administrators and rarely through personal sources, making content generation highly centralised so as to avoid digressions from the central agenda.

Even as new groups try to give a new form to outsourced terror, compelling evidence suggests that new militancy is being guided from across the borders. The defined objective of new militancy corresponds to Pakistan’s narratives against India. For example, in September 2021, Pakistan’s government released a 131-page dossier titled, ‘Human Rights Violations in Indian Illegally Occupied Jammu and Kashmir (IIOJK)’, presented by Pakistan’s foreign minister to the international community. The dossier had multiple false claims and inaccuracies reflecting propaganda that has the same outline of online media jihad of new militant groups. This includes points such as the portrayal of movements as indigenous, citing arrests as torture, and counteroperations as false flag operations. Further, digital forensics traced by experts also reveal that online content of new outfits is being operated from across the borders, and new groups often cross-post the content shared by the Pakistan government’s Twitter accounts with wrong attributions and false claims.

Though it can be argued that the new militancy failed to create a secular or homegrown narrative, renewed social media insurgency may likely attract resources and recruitments given the fact that many Kashmiri citizens feel more alienated from the rest of the country after the abrogation of Article 370. As Pakistan’s deep state continues to wage information warfare, India must develop an effective ‘communication strategy’ with an independent team of experts by providing empirical facts each time an attempt is made to cultivate false narratives. Improvising participatory and inclusive democratic process by engaging in the online space and formulating narratives supported by concise content is an effective strategy to tackle radicalisation. As some analysts point out, unless the Indian government implements effective counternarratives against terrorism, it cannot apprehend the ‘mind space’ that fuels this extremism.