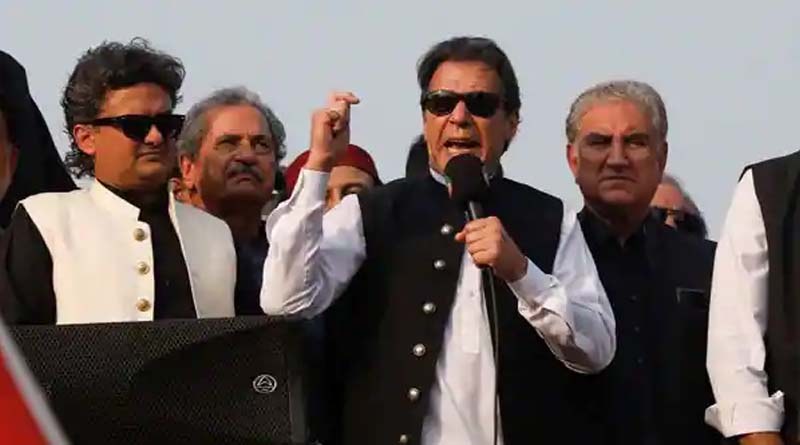 Former Pakistan Prime Minister Imran Khan launched an all-guns-blazing attack on the chief of the country’s premier spy agency, ISI (Inter-Services Intelligence). “DG ISI, open your ears and listen. I know a lot of things but I am quiet only because I don’t want to harm my country,” Khan said in a stern warning to the agency. Hundreds roared and cheered Khan on waving the country’s and his party’s flags.

This comes a day after ISI chief Lt Gen Nadeem Ahmed Anjum, in an unprecedented press conference on Thursday, alleged that Imran Khan had made a “lucrative offer” to Pakistan Army chief General Qamar Javed Bajwa in return for backing his government during political turmoil in March this year that ultimately led to Khan’s ouster from office midterm.

“I do constructive criticism for the betterment (of the country). Otherwise there is a lot for me to say,” Imran Khan said, addressing a rally in Lahore.

“I could have exposed the ISI but refrained for the betterment of the country,” he maintained.

Addressing his party workers and supporters at Lahore’s famous Liberty Chowk, Imran Khan said that his “only aim is to free my nation and turn Pakistan into a free country”.

Imran Khan rejected ISI chief Lt Gen Nadeem Ahmed Anjum’s allegations, saying that it was one-sided and that he only “talked about Imran Khan” while not saying anything against the “thieves” in the government.

The unprecedented press conference by the spy chief came as the country continues to grapple with the killing of journalist Arshad Sharif in Kenya and the veiled attacks on its armed forces. Sharif was shot dead at a police checkpoint in Kenya on Sunday night, setting into motion a political whirlpool in Pakistan. The Kenyan police later said that the murder was a case of “mistaken identity”.

Imran Khan emphasised that he is “not a runaway that would either sit quietly here or criticise the military in London” in a searing attack on Pakistan Muslim League-Nawaz (PML-N) chief, Nawaz Sharif.

Imran Khan, who has launched a protest march to Islamabad with the demand for an early election, assured that the rally would be peaceful. “Our march will be according to the law. We will not break any rules. We will not enter the Red Zone and will only go to the areas which have been designated by the Supreme Court for protests.

Imran Khan, 70, who was ousted from power this April after a no-confidence vote against him in parliament, had talked about a ‘threat letter’ from the US, which, he claimed, was a part of a foreign conspiracy to remove him since he was not acceptable for following an independent foreign policy. The US has categorically rejected the allegations.