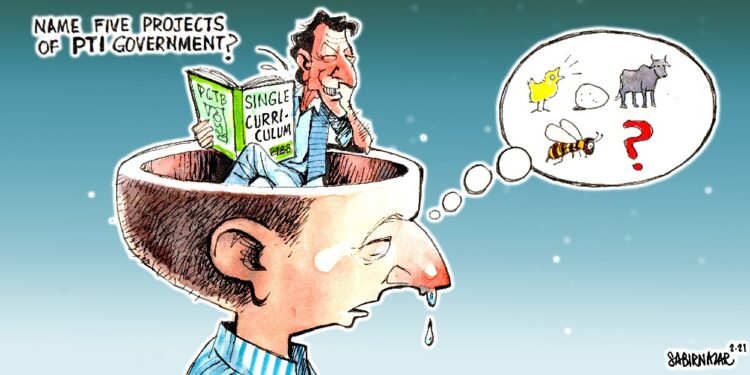 In 2013, Pakistan ranked 127 out of 179 countries in Transparency International’s “Corruption Index”. From 2014-2018 – the Nawaz Sharif years — its position improved to 117. Did it and its patron then become “less corrupt”? In the last three years from 2018-2020 –the Imran Khan years — it fell back to 124th position. Did it and its patron then become“more corrupt”? Yet many “educated”, urban Pakistanis, insist Nawaz Sharif & Co were very corrupt while Imran Khan and Co are pure as driven snow.

​Nawaz Sharif was disqualified from standing for public office because he failed to declare an insignificant income he had not received, and he was convicted for “corruption” because he couldn’t provide a “satisfactory” money trail for some of his deceased father’s assets, even though no “corruption” was proved. But Imran Khan lives in a sprawling billion rupee estate in Islamabad (where his expenditures run into millions of rupees every year), which has been “regularized” by the CDA post-haste. His ancestral home in Zaman Park, Lahore has just been refurbished to the tune of tens of millions of rupees and the Election Commission of Pakistan is afraid to declare the status of the PTI’s unaccounted crores in foreign donations. Yet he remains prime minister because this isn’t a sign of corruption.

​Nawaz Sharif was accused of rigging the 2013 general elections in absentia. But a Commission of Inquiry under an ex-Chief Justice of Pakistan determined these elections were free and fair. Imran Khan won the 2018 elections after the RTS system broke down inexplicably in the dead of night – the head of NADRA at the time said it had been deliberately switched off – which gave about 40 undeserved seats to the PTI. Now Imran Khan is determined to win a second term in office on the basis of rigged EVMs, RTS systems and internet votes of 7 million overseas Pakistanis, moves which are opposed by the ECP and Opposition parties. But this isn’t a sign of corrupt practices.

​NAB has launched dozens of “corruption” cases against main leaders and supporters of the PMLN and PPP. But not a single one has been proven in three years. Unequally, it hasn’t touched any leader of the PTI or investigated various reported scams, like the sugar and wheat scams, or the commissions and kickbacks in the BRT and Malam Jabba projects, or the daily corruptions in the Punjab government evidenced by the continuing postings and transfers of low and high level bureaucrats because these instances are not corruption.

​In fact, “corruption” is a way of life not just among politicians and organs of the state but in society and disposable-income communities at large. It exists in one form or another, to a greater or lesser degree, in every political system. Democrats and dictators are equally culpable as are civilians and soldiers. In the democratic, capitalist United States, for example, corporate bosses, bankers and stock brokers who manipulate money markets are as culpable as Pentagon generals and arms manufacturers and contractors who wage wars to pocket fat commissions and bonuses, as we have recently discovered happened in the trillion dollar American wars in the Middle-East and Afghanistan.

​If financial “corruption” is so widespread – and hence so “ordinary” – why are some people in Pakistan so obsessed with it to the point where it becomes their all or nothing? Why are they not more concerned about a more corrosive form of corruption that erodes the very basis of civil society and is a major source of political instability and uncertainty? By this we mean constitutional corruption – military supremacy, oppressive majoritarianism, election rigging, justice denial, system hybridity, etc., — that destroys the Trust embedded in a Social Contract (Constitution) between rulers and ruled that forms the bedrock of modern statehood and nationhood.

​Let’s face it. Nawaz Sharif is no angel, never was. He was once a child of an unconstitutional dispensation, like Imran Khan is today. It was right to expose and oppose him then, just as it is right to expose and oppose Imran Khan today. But let’s also face the fact that Nawaz Sharif has “grown up” politically in the last decade or so, as it were, to challenge the unconstitutional encroachments of powerful organs of the state on the life and liberty of Pakistanis at great personal risk and without regard for personal financial loss or gain or undemocratic assumption of power. In other words, he has identified and focused his energies on the principal contradiction between state and society in Pakistan, sought to redress the balance and paid for it with imprisonment and exile. It is this political narrative against constitutional corruption that deserves our focused support.