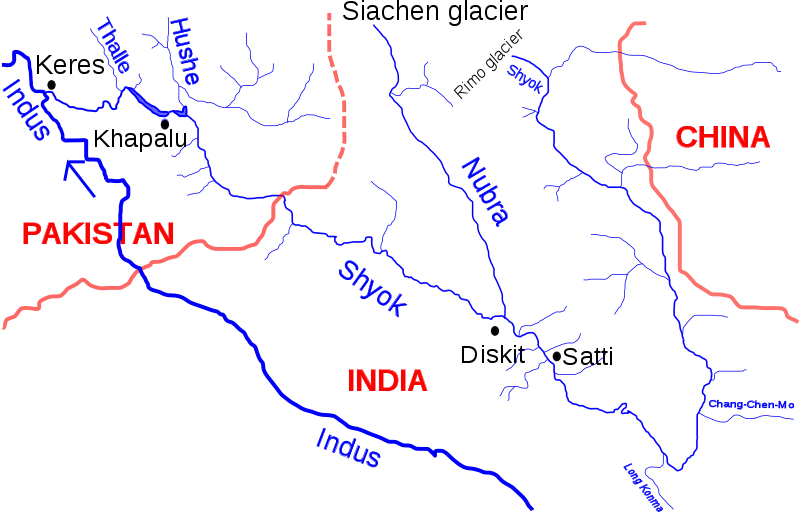 Karakorum Highway was inaugurated in 1979, India wanted to disrupt this land link between Pakistan and china, so Indian Army illegally occupied part of Siachen in 1984. In line with Karachi agreement of 1949, Cease-fire line was delineated up to Pt NJ9842. To evict enemy from there position Chumik Operation was launched in April 1984. Till early 1980s permanent deployment of troops remained restricted only along the demarcated line of control/ South of Pt NJ9842. Even during wars of 1965 and 1971, no movement of troops was resorted to from either side. In late 1970s, India started taking interest in Siachen by sending military mountaineering expeditions. This information was received from civilians of the area and International Alpine Magazine in early 1983. Indian intrusions were confirmed by aerial reconnaissance and foot patrols of Pakistan Army. India reached Saltoro Range and occupied Sia La and Bilafond La in April 1984. When Pakistan’s 62 Bde along with SSG troops were ordered to occupy these areas, the troops found that Indians were already entrenched on Sia La and Bilafond La. This operation by the Pakistan Army led to the first armed clash on the glacier on 25 April 1984 Own troops occupied Gyong La, Yarma La and access route to K2 on Convoy Saddle.

The Siachen dispute was added to the roster of major issues in Indo-Pakistan relations for the first time in April 1984. During the month, Indian Army airlifted mountain trained forces into position over-looking key passes in the Baltoro Range , a spur of the Karakoram Mountains , flanking the Siachen Glacier’s southern rim, setting in motion a spectacular high-altitude military struggle with Pakistan that has continued unabated to the present day. Confronting one another in some areas at altitude over 6000 metres, the two armies contested for possession of a largely uninhabited wedge-shaped piece of territory, about 2500 square kilometers in size, situated just south of the Chinese border. The struggle is on till today and a number of operations have been executed by both sides for occupation or retention of key areas / posts.

Chumik is a minor sub sector of Bilafond Sub Sector, which has remained quiet since 1984 with the exception of Chumik Operation in 1989. Forwarded posts of the sub sector overlook Gyong Glacier and also dominate by observation, enemies Baniya Base. A Pakistani post was established in the Location of present Sher Post in 1985. The post was later withdrawn suffering heavy losses due to avalanches and enemy artillery fire the same year. The post was re-established in 1988 by 9 Northern Light Infantry on the order of Commander Force Command Northern Area. In the early spring of 1989, there were signal intercepts indicating enemy activity in the area. On 22 February 89 , enemy helicopter’s conducted reconnaissance of the area followed by inaccurate artillery fire. Reconnaissance was conducted by Helicopter and it revealed that enemy had established five new posts/bases. Enemy had also occupied off shoots of point 22158 (the highest peak in the area which came to be known as Naveed Top after this operation). This gave enemy, the vital observation over our entire sub sector which could create serious problems in holding and maintenance of own posts. Enemy started engaging our forwarded posts, Ashgar Base and escalated the situation in the sub sector , forcing us to react.

Relative strength and deployment in the area is as under:

Enemy
Enemy had intruded into Chumik area and occupied the area. Enemy’s one complete battalion supported by different calibers of artillery and complete flight of Lama Helicopter took part in the operation. They established the following posts/bases which were supported through administrative bases of Bniya and Rani:

Own
A company of regular troops was detailed to relieve Northern Light Infantry troops in the Chumik Sector on 10 April 1989 . The force was further strengthened later, which was necessary for the final eviction of the enemy from the Sector. Activities in this sector had intensified considerably and constant vigil was kept on the enemy activities. Risk of weakening of our forces in this area could therefore not be taken. Guns and mortars of available artillery in the area supported the operation. One company of Northern Light Infantry on relief from the sector was provided for assistance. Ten men of Special Services Group were provided for technical assistance and expertise. Four Lama Helicopters of Arms Aviation were provided to support the operation.

The Initial Plan
Company minus ex 9 Azad Kashmir was holding Chumik sub sector which was subsequently augmented by another company for offensive role. Helicopters were also provided for the operation, along with Special Services Group troops and additional 81 millimeter Mortars. It was planned to occupy the area to check the further movement of enemy. The out line plan was as follows:

Mission
To occupy the area by engaging enemy Ganga Base with observed artillery fire to interdict her Line of Communication.

First Attempt
Aerial reconnaissance of the area was carried out on 16 April 1989 . The expedition was sent out in establishing Kausar Base by mid night the same day. Kausar 1 was established on 17 April at a height of 17000 feet and in the same evening Kausar 2 was also established. It was found that movement thereafter was not possible due to extreme difficult nature of terrain. The expedition was immediately called off to avoid detection by the enemy.

Second Attempt
Force Commander Northern Area decided to drop Special Services Group persons on Saddle by helicopter. Effort was made to drop the persons but helicopter could not hover at such a low level where persons could jump basically because of poor weather and configuration of ground. The mission was once again aborted.

Modified Plan
After failure of two missions, the plan was modified. Persons ex 9 Azad Kashmir and Special Service Group) to be sling – dropped at the base with the aim of occupying the area, facilitating ultimate eviction of enemy. Two platoon size expeditions to make efforts for link up from two directions (One platoon each from 9 Azad Kashmir and 6 Northern Light Infantry).

Execution of Plan
On 19 April 89 , the first helicopter took off. Lieutenant Naveed, a volunteer officer ex 9 Azad Kashmir was sling drooped at the Saddle. Captain Seghal and Captain Zia (got shahdat as Lt colonel on a UN mission), the pilots of helicopter also did a wonderful job and were able to release the slung officer at a flat place on the base (Naveed Base). Subsequently Naik Yaqoob, Special Services Group was also dropped to join Lieutenant Naveed. Some stores were also dropped in next sorties. But soon weather deteriorated making further drops impossible. It was 21 April when weather cleared and more persons were dropped. Then it was race between Indians and us to reach the top. Our troops made it to the top (Kamran Top) earlier than the enemy thus gaining the victory at a highest point in the world where battle has ever been fought. Eight Indian soldiers were discovered only 300 – 400 meters from Kamran Top who were forced to withdraw under own fire.

6 Northern Light Expedition
The expedition having left on 18 April was close to saddle on 25 April. Three officers with one Jawan were buried alive under tons of snow. This marked the end of expedition.

9 Azad Kashmir Expedition
The expedition under Captain Tariq took a good start on 22 April 89 . Its fire raided enemy’s Agra I forcing her to vacate the base. Then proceeded to close with Agra II but could not succeed due to difficult terrain. The post was however engaged with artillery fire.

The First Blow
Enemy’s intention of dominating Chumik Glacier began to fail when “Ganga Base” also known as “Thappa Base” was effectively engaged by artillery. The enemy was forced to shift the base. Destruction of Ganga Base probably forced enemy to give a second thought to her plans.

The Raid
On 30 April 1989 , a raiding party consisting of 11 persons including 4 officers was organized by Major Abdul Rehman Bilal. The party closed in with enemy machine gun position at approximately 1900 hours. The fire was opened which caught enemy by surprise. However, enemy soon retaliated with small arms and rocket fire. Own troops were relatively safe since Kamran Post was protected by a boulder. The raiding party in the meantime inflicted heavy damages to the enemy. This final blow forced enemy to withdraw asking for a meeting where almost all of our terms were accepted. The area was vacated and declared as de-militarized zone.