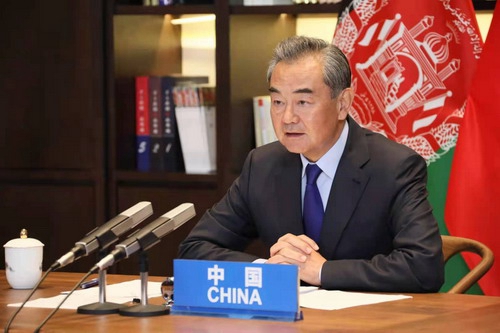 Wang Yi said that the current international and regional situations are undergoing complex and profound changes, and the security and stability of Afghanistan and the region are facing new challenges, with foreign troops’ withdrawal from Afghanistan accelerated, the peace and reconciliation process in Afghanistan impacted, and armed conflicts and terrorist activities becoming more frequent.

Under such circumstances, it is more necessary for the three countries to strengthen communication and cooperation to make the situation in Afghanistan more conducive to the common interests of Afghanistan and other countries in the region, Wang said.

Speaking highly of China’s contribution to promoting trilateral cooperation, Atmar and Qureshi said Afghanistan and Pakistan are willing to forge closer and more friendly neighboring partnership with China, strengthen joint construction of the Belt and Road, deepen cooperation in politics, economy and connectivity, and jointly promote peace, stability and development of the three countries and the region.

The foreign ministers reached consensus on the Afghan peace and reconciliation process, and the trilateral cooperation.

The three sides called for practically advancing the peace and reconciliation process in Afghanistan, and ceasefire should be realized and violence should be ended at an early date.

They agreed that the withdrawal of foreign troops from Afghanistan should be carried out in a responsible and orderly manner to prevent the deterioration of the security situation in Afghanistan and the return of terrorist forces.

They stressed that the solution to the Afghan issue should fully reflect the principle of “Afghan-led and Afghan-owned”, support Afghanistan in becoming an independent, sovereign and neutral country, pursue a moderate Muslim policy, firmly fight against terrorism, and maintain friendly ties with other countries, especially neighboring countries.

The three sides agreed to explore ways to deepen trilateral cooperation against the backdrop of COVID-19, and substantively expand the Belt and Road cooperation in Afghanistan, so as to bring more benefits to the people of the region.

The three sides reiterated the consensus of jointly fighting all forms of terrorism.

They stressed the need to reject the “double standards” of anti-terrorism, to forbid any terrorist organizations or individuals from using their territories to engage in criminal activities against other countries.

The foreign ministers also urged strengthened efforts to combat the East Turkistan Islamic Movement and other terrorist forces, so as to safeguard regional security and stability.

China and Pakistan reaffirmed their firm support for the Afghan peaceful reconstruction and their willingness to expand economic and trade exchanges with Afghanistan, and to assist Afghanistan in enhancing its self-development capacity.

Afghanistan and Pakistan expressed the willingness to strengthen communication and coordination, deepen political mutual trust and create prospects for peace and cooperation, according to the foreign ministers.