Changing Language and Ethnicity: India on a Warpath in Kashmir 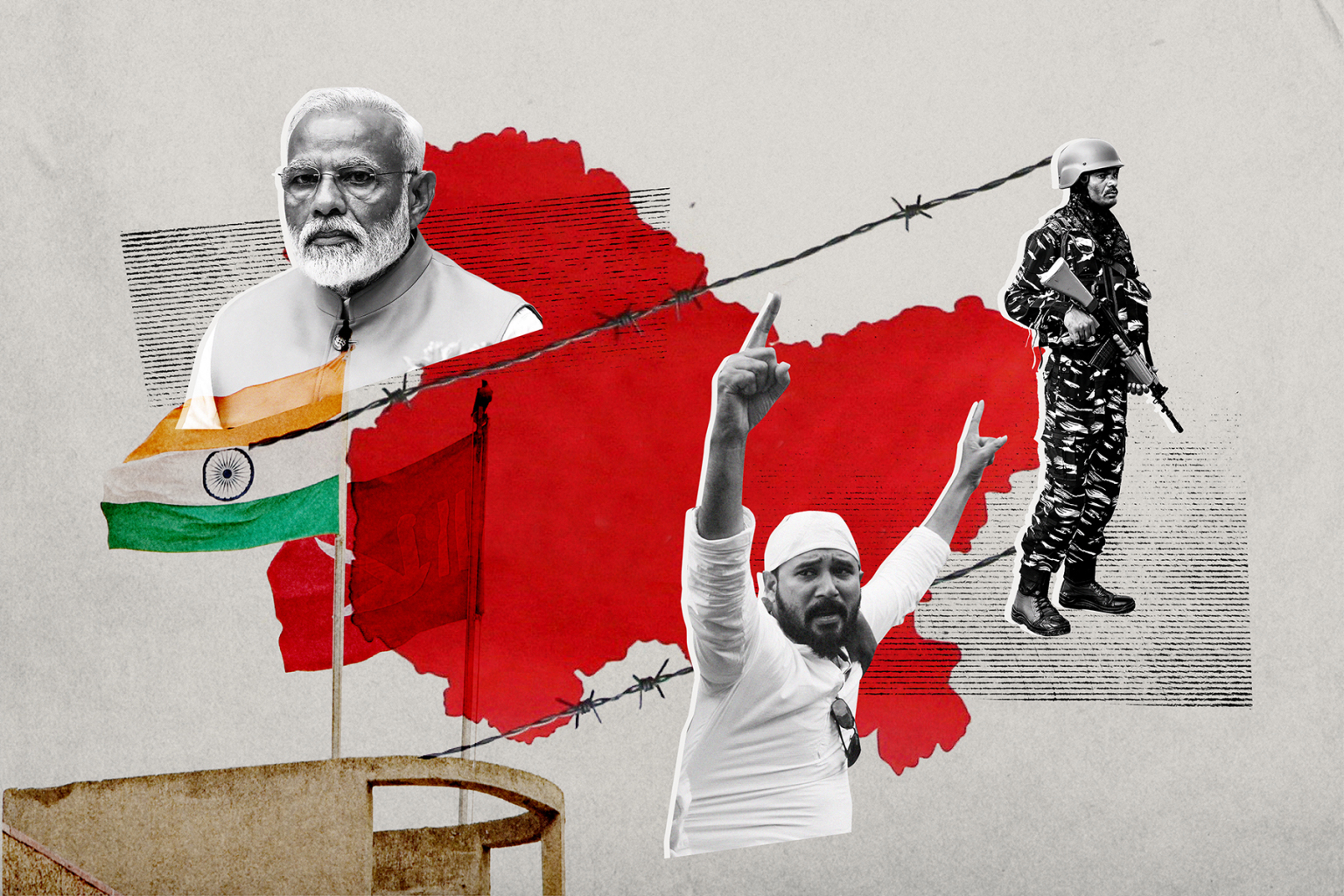 India has sold its illegal annexation of Kashmir to the world in August 2019 as a move to end the conflict and achieve peace. Senior Indian officials and diplomats have been at pains to explain to a worried international community that restrictions and the world’s longest lockdown in the territory will bring “jobs, inclusive development, and a hope for peace,” as pitched in the enthusiastic words of Harsh Vardhan Shringla, India’s Foreign Secretary.

But far from bringing peace and jobs, the Indian steps have introduced controversial measures – such as imposing the Hindi language – that could exacerbate conflict for decades to come. The Hindi language is disputed in its home country. It is controversial and contested by most Indians who feel the language is being imposed on a diverse nation. Imposing it in Kashmir is a recipe for prolonging the conflict. This step elevates conflict in Kashmir to a new level and links it to rising linguistic tensions in mainland India. In essence, India is now exporting its ethnic tensions to Kashmir, already one of the most complicated global conflicts today.

India has raised the stakes in April 2020 by notifying new domicile laws that open land ownership and residency in Kashmir to India’s one billion citizens. By the end of September 2020, approximately two million residency permits had been issued to Indian citizens, allowing them to compete with local Kashmiris for land, jobs, and other facilities. The expected next step would be to elbow out Kashmiris in political representation. Kashmir is witnessing the soft version of the deletion of a people and identity.

The process is in the early stages but is moving forward. As more Indian citizens attempt to move to Kashmir, encouraged by the Indian government, negative reactions from Kashmiris, the real landowners, are bound to come. Already they are being humiliated by standing in long queues to apply for domicile certificates that have become a precondition to receiving services like enrollment in school. The scale is breathtaking: millions of Kashmiris who lived here for centuries are now required to apply for a piece of paper from India to prove they have the right to live and work in their land.

The new law grants permanent residency and land ownership to any Indian citizen who lived in Kashmir for 15 years or has studied in the disputed territory for seven years and completed class 10 or class 12. Children of Indian government employees who have served in the state for 10 years are eligible to settle and claim local residency rights. “The law applies even if the children have never lived in Kashmir,” according to an Al Jazeera report, which adds, “Out of 66, top bureaucrats serving in [Kashmir], 38 are outsiders belonging to other Indian states. Many other outsiders serve in various central government institutions like banks, post offices, telecommunication facilities, security institutions, and universities.”
Out of 12.5 million total population, Muslims comprise 68.31 percent and Hindus 28.43 percent in Kashmir, according to a 2011 India census, cited by Al Jazeera.

The question of imposing India’s Hindi language in Kashmir is likely to become another bone of contention between Kashmiris and India and could fuel unrest, and even violence. Keep in mind that similar attempts by New Delhi to impose Hindi within India backfired, leading in some cases to riots. On one occasion, Indian Prime Minister Narendra Modi was stopped from giving a speech in Tamil Nadu in Hindi and was told he could only deliver it in Tamil or English. Many in the 28 states that make up the Indian union are uneasy about attempts to impose Hindi, which in many ways is the language of India’s northern belt, a hotbed of religious extremism.

The language also favors India’s northern ruling elites, mainly in New Delhi and Uttar Pradesh. In fact, ‘Hindi Arrogance’ is a phrase in Indian politics outside the Hindi belt of the north. Recently, a bank clerk in Tamil Nadu created an uproar in the state when he denied a loan to a qualifying person because the application was not filled in Hindi but in local Tamil. The bank had to transfer the employee to assuage Tamil speakers. An influential Tamil politician, M. K. Stalin, who is the president of Dravida Munnetra Kazhagam (DMK) party, warned New Delhi that cultivating ‘Hindi hegemony’ could be dangerous. “Beware. If you play with Tamil sentiments, small sparks will become a huge fire,” he said.

This means 41.03% of all Indians were Hindi-speaking. To show Hindi-speakers in a simple majority, Indian authorities combined different dialects and linguistic variations under the heading Hindi. Entire populations of states that listed Hindi as official language were shown to be Hindi-speakers. If this artificial increase is discarded, the original Hindi Belt can be reduced to two states: Uttar Pradesh (199.6 million in 2011), and parts of Bihar (103.8 million in 2011). Even then, there are more than a dozen languages spoken in Bihar that can easily be considered different from the official Hindi.

So, from many angles, the native Hindi-speakers in India hover somewhere around one-third of the population at best. But this is an influential minority that has been successful in imposing its culture, language, worldview, and even its historical insecurities and religious biases on the rest of India.

In September 2019, the Indian Interior Minister Amit Shah suggested that the Kashmiri language, written in Urdu and Arabic alphabets, should be converted into the Hindi alphabet. A report by the Anadolu Agency described the suggestion as equivalent to “stirring a hornet’s nest.”
With these steps, India is exporting its divisions and social integration problems to Kashmir, a region that has enough issues without this new experiment in social engineering.

Aside from Kashmiri resistance to these moves, India must contend with international opposition to unilateral steps in Kashmir. In the United States, Democratic presidential hopeful Joe Biden referred extensively to India’s actions in Kashmir in a policy paper released by his campaign team.

“In Kashmir,” says Biden, “the Indian government should take all necessary steps to restore rights for all the people of Kashmir. Restrictions on dissent, such as preventing peaceful protests or shutting or slowing down the Internet, weaken democracy. Joe Biden has been disappointed by the measures that the government of India has taken with the implementation and aftermath of the National Register of Citizens in Assam and the passage of the Citizenship Amendment Act into law. These measures are inconsistent with the country’s long tradition of secularism and with sustaining a multi-ethnic and multi-religious democracy,” according to the policy paper posted on his website.

President Trump has stood by his offer for Kashmir mediation between India and Pakistan, brushing aside the Indian government’s repeated assertions on bilateralism and interference. Mainstream American media has expanded its monitoring of Indian actions in Kashmir, to the discomfort of New Delhi.

While India claims the entire territory (first as a semiautonomous state and now as a ‘union territory’), the United Nations begs to differ, and no member state of the world body has formally endorsed India’s claim. Secretary-General António Guterres underlined this on August 8, 2019, in a formal statement, and reiterated his position a year later on September 17, 2020. In that statement, Mr. Guterres flayed “restrictions on the Indian-side of Kashmir, which could exacerbate the human rights situation in the region,” and demanded that parties “refrain from taking steps that could affect the status of Jammu and Kashmir.” In effect, the UNSG rejected Indian annexation and all other unilateral steps in Kashmir imposed without the consent of the Kashmiri people and in contravention of international laws.

“The latest action is a vindication of Pakistan’s consistent stance that the major intention behind the Indian Government’s illegal and unilateral actions of 5 August 2019 was to change the demographic structure of [Kashmir] and turn Kashmiris into a minority in their own land. This has long been part of the RSS-BJP’s ‘Hindutva’ agenda,” the statement said.
The amazing part of India’s actions in Kashmir is that no one consulted the native people.

Writing for the Time magazine in August, Kashmiri human rights defender Khurram Parvez invokes democracy: “The consent of the governed, which is essential in a democracy, is not at all a concern for the Hindu nationalist government of India when it comes to the people of Jammu and Kashmir, which includes the Kashmir valley.”

India is humiliating Kashmiris for demanding their right to self-determination. All Kashmiris feel it, across the religious and political divide. Vikram Malhotra, a senior member of the pro-India Jammu and Kashmir Apni Party (JKAP), complained in May that Kashmiris now must register to get services in their own land.

“The people having state subjects of erstwhile State of Jammu and Kashmir should be considered as a domicile. They should not be forced to stand in queues for new domicile certificates which would be an injustice for the residents, who have already completed their documents, and it would create chaos in the society,” Malhotra said.

The worst-case scenario is that frictions could develop if largescale population shifts happen from India to Kashmir. And if frictions turn into violence, or if Indian settlers are attacked by native Kashmiris, India’s occupation army will retaliate, leading to more violence and perpetuation of conflict.

The biggest argument against India’s unilateral actions in Kashmir is that they set the conflict back several decades in terms of peace. If the conflict intensifies, this will destabilize both India and Pakistan and rob the region of much-needed focus on prosperity and development. Can India step away and take the necessary steps to resolve the conflict instead of perpetuating it? The region’s stability depends on the answer.