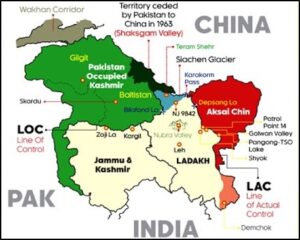 Pakistan Occupied Kashmir (PoK) is that part of the Jammu and Kashmir (India) which was invaded by Pakistan in 1947. The region is referred by the United Nations and other international organizations, as ‘Pakistani-controlled Kashmir’ (or Pakistan Administered Kashmir) and it was re-named as ‘Pakistan occupied Jammu-Kashmir.

1. During partition, Jammu and Kashmir was given the option to join either India or Pakistan but Maharaja Hari Singh, the ruler of that time, decided to keep it as an independent state.

3. Mountbatten replied saying, “It is my government’s wish that as soon as law and order have been restored in Jammu and Kashmir and her soil cleared of the invader, the question of the State’s accession should be settled by a reference to the people.

Education in Balochistan under threat

China gave a big blow to ‘friend’ Pakistan, left the power project in PoK in limbo, darkness in the country

Why Balochistan wants freedom from Pakistan

In Pakistan, a fragile country, they combined to produce relentless rain and fatal flooding and it is accustomed to monsoons…