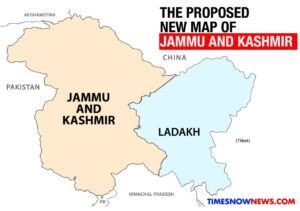 Kashmir is the northernmost geographical region of the Indian subcontinent. Unt

In the first half of the first millennium, the  region became an important centre of Hinduism and later of Buddhism; later still, in the ninth century, Kashmir Shaivism arose. In 1339, Shah Mir became the first Muslim ruler of Kashmir, inaugurating the Salatin-i-Kashmir or Shah Mir dynasty. The region was part of the Mughal Empire from 1586 to 1751, and thereafter, until 1820, of the Afghan Durrani Empire. That year, the Sikh Empire, under Ranjit Singh. In 1846, after the Sikh defeat in the First Anglo-Sikh War, and upon the purchase of the region from the British under the Treaty of Amritsar, the Raja of Jammu, Gulab Singh, became the new ruler of Kashmir. The rule of his descendants, under the paramountcy (or tutelage) of the British Crown, lasted until the Partition of India in 1947, when the former princely state of the British Indian Empire became a disputed territory, now administered by three countries: India, Pakistan, and China.

The word Kashmir was derived from the ancient Sanskrit language and was referred to as káśmīra. The Nilamata Purana describes the valley’s origin from the waters, a lake called Sati-saras. A popular local etymology of Kashmira is that it is land desiccated from water. Geologists agree that the Valley was formerly a lake, and the lake drained through the gap of Baramulla (Varahamula) which matches with the Hindu legends.

To boost the winter tourism at the tourist destination Doodhpathri, the authorities in the Budgam district are going to conduct…

Keeping up their tryst with football passion, Bandipora girls football team of International Delhi Public School are all set to…

The J&K Government Friday ordered the creation of 486 posts, 104 Gazetted and 382 Non-Gazetted) for transfer to Union Territory…

Saying that poetry acts as a bridge between the visible and the invisible, Lieutenant Governor Manoj Sinha   observed that the…