Can We Kashmiris Accept The Talibanization Of Our Beloved Valley? No 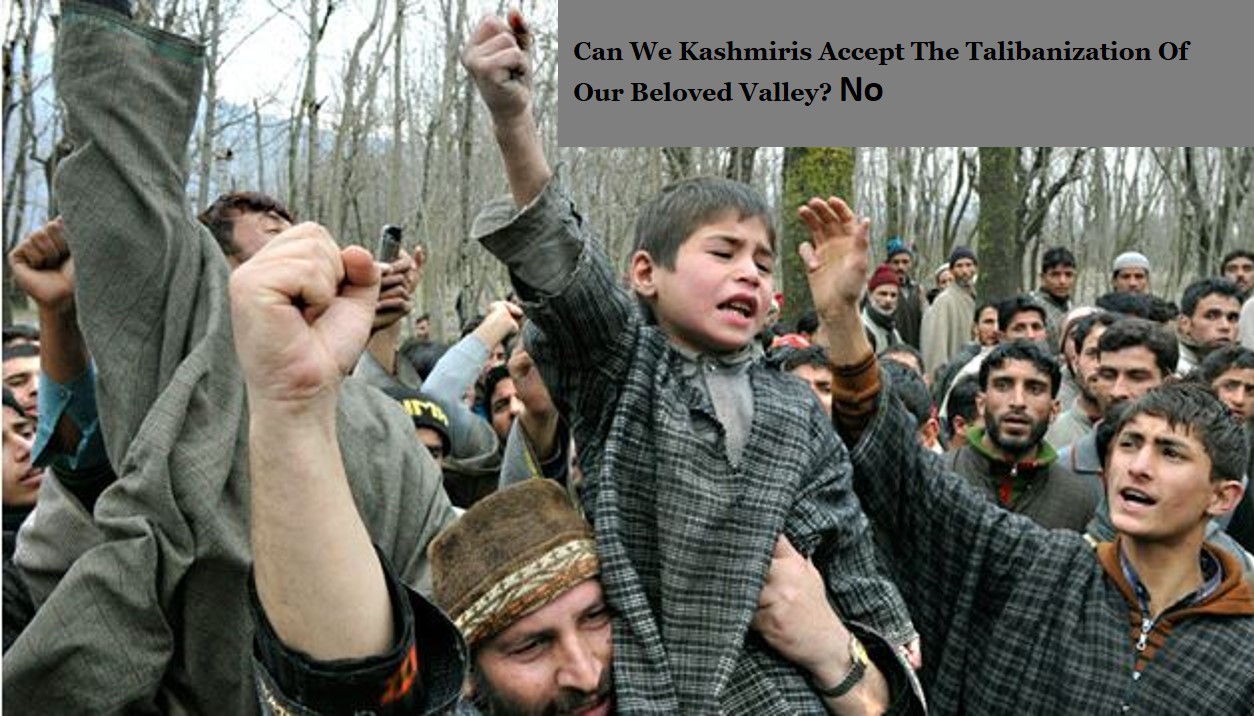 Pragash, a Srinagar-based all girls band was publicly chastised for competing in the Battle of the Bands, a local rock band competition. Bashiruddin Ahmad, the grand mufti of Jammu and Kashmir, issued a fatwa against the band claiming that singing is un-Islamic (Indian Express, 2013). This was the first time an all girls band was competing in such an event. While the girls were forced to withdraw from the contest, male participation in music festivals and other programs continues uninterrupted. We see heavy criticism of the government in Kashmir but not much indignation over gender discrimination. Religious preachers and many members of the society constantly judge women harshly and blame them for everything that goes wrong. This has been normalized.

Why Are Women Blamed For Men’s Faults?
Almost every day, women and girls are blamed for being harassed on roads or on social media. Nobody questions the men or the boys for harassing women. Is it that our society needs someone to blame for its shortcomings, and women are an easy target? It is painful to observe that we as a people are misogynistic. Women are bitterly judged over everything. It seems to be an attempt to keep us silent all our lives, and never have a voice or identity of our own.

I have grown up observing that the men are conditioned to believe that they are not at fault even if they do the worst of things. I remember a Facebook post. It was a news report by a local newspaper of a girl named Nadiya. She was lauded for her work addressing child sexual abuse. Some young men posted comments that women and children should be dressed properly. Their dressing creates wrong intentions. I was shocked to see that many youngsters, including girls, commented that women enjoy being harassed. That is why they dress inappropriately. A young man criticized Nadiya. He wrote that she should cover herself in a burkha and then teach others about sexual abuse. This is not an isolated incident. It is common in Kashmir that a woman is morally policed publically even though she is the one making a significant contribution to society. Watch pages of women who are social media influencers. You will find abuses hurled at them by males and even females. The trolls do not even spare the parents and relatives of these social media figures. It is not that all the people in the Valley cuss them. But some express their hate in a very disturbing manner. They threaten these women, they call them names, troll them and their families. They even make personal comments about them. How reprehensible this is, and how sad.

What also encourages these trolls are the lectures delivered by some religious preachers. While preaching about religion, they target women and judge them so severely.

Mr Mushtaq Veeri Stereotypes Women
Once a friend sent me a lecture by Mr Mushtaq Veeri in which he was preaching about morality. He said parents do not watch over their daughters. He said when you ask the parents where their daughter is, they will casually say that she has gone nearby with her brother’s friend. This statement is seemingly so simple. But Mr Veeri said it in such an accusing manner. With this one statement, he stereotyped a simple Kashmiri girl so negatively. Why? Mr Veeri never takes into account how he harshly stereotypes women in his speeches. He portrays them as property that needs to be guarded, kept hidden and placed under a lock perhaps. Why Mr Veeri? I too am the child of Allah (SWT). When you preach about religion, I want to hear about my beautiful religion. I too want to know how I can practice my religion in a better way. But don’t judge women or girls harshly. It hurts.

Dr Manzoor Blames Women For Carrying Colourful Bags
Another preacher Dr Manzoor Ahmad Mir said in his sermon, “Women should not carry bags. Men may get attracted to those bags and may get wrong feelings about the woman. Women should carry their books in a gunny bag in order to protect themselves.” Then he said that burkha-clad women do not cover themselves properly. In their WhatApp status, they post photographs dressed in abayas of different colours. We are such a glorious, wonderful society. I am so proud to be a Muslim and a Kashmiri. But why are our preachers being so harsh to women and girls? Why are they conveying that a man can get into a wrong act if a woman is wearing a coloured abaya or carrying a colourful bag?

Why are they never telling the men to act in a noble manner? Do they realize that their statements put the women and girls in a very vulnerable position? Our preachers are giving the message to men and boys that you are not responsible for any wrong act. It is not your fault. The woman or girl should have worn a black abaya and carried a gunny bag. At such times I want to cry and tell these preachers that this is Kashmir. This is not Afghanistan of the Taliban. Please don’t make it the Afghanistan of the Taliban. We have our history. We have our culture. Please don’t erase our history and culture.

It also occurred to me that this preacher has saved the number of girls in his phone. And he looks at their WhatsApp status and their clothes and the colours of their abaya. He reduces women to mere objects who cannot exercise any choice regarding the colour of their abaya or the colour of their bag. Because of these kind of lectures, the men of our society believe that they are godfathers and they must moral police the girls all the time. Because of the influence of such moulvis, everything bad that is happening is blamed on the women of our society. After the devastating flood of 2014, social media was flooded with comments of men saying that people of Kashmir faced punishment because of how women dress, they wear palazzos, they wear makeup etc. The newspaper reports said that flood channels of the Jhelum had been blocked by encroachment and rampant colonization. The corrupt colonizers, builders, engineers and contractors did not provide proper dams and water channels to divert the flood water. But a number of people chose to express their opinion that the women did not follow the proper dress code.

Why Suppress, Subjugate Women?
I see so many people who want to always want to suppress and subjugate women in one way or another. When I was doing LLM at Kashmir University, a senior told me that I should dress more appropriately. Jeans and coats are not something that a grown-up woman should wear. This guy had the audacity to tell me that they are going to write an application to the VC to make abaya mandatory for women studying in the university. Is this the Kashmir that we want to build? Where the men decide the way the women can dress?

Some women are no less. In the university, once a burkha-clad woman came to me. She told me that I should not wear jeans and a coat. She said my dressing represented my community in a bad manner. I am the child of Allah (SWT) and I am the child of this soil. I am aware of the rights and wrongs that I must abide by. Why should someone else dictate the rights or wrongs to me? Allah (SWT) has not given him or her any moral authority to do so. Some of our preachers have constant khutbas on the clothing or makeup of women. They blame parents for sending their daughters to study in different states. It seems to me that we have created two Kashmirs. One Kashmir believes that our women, like our men, can achieve great heights if they get the right opportunities. Another Kashmir believes that women should be kept hidden in their homes. But our history and culture has been of a glorious civilization. Our culture and ideology cherishes the verses of Lalla Ded, who defied the odds by crossing the threshold of her husband’s house in order to live the life of an ascetic. Lalla Ded overturned the reliance on male authority. She chose to break the mold of patriarchy in a suffocating society by not allowing her spiritual and intellectual freedoms to be curbed. Kashmir has been ruled by four women rulers as mentioned in Kalhana’s Rajtarangini namely Yashovati of Gonda Dynasty, Sugandha of Utpala Dynasty, Didda of Viradeva Dynasty and the last queen was Kota Rani. We had a woman chief minister. We are proud to have a heritage where women have wielded power and authority.