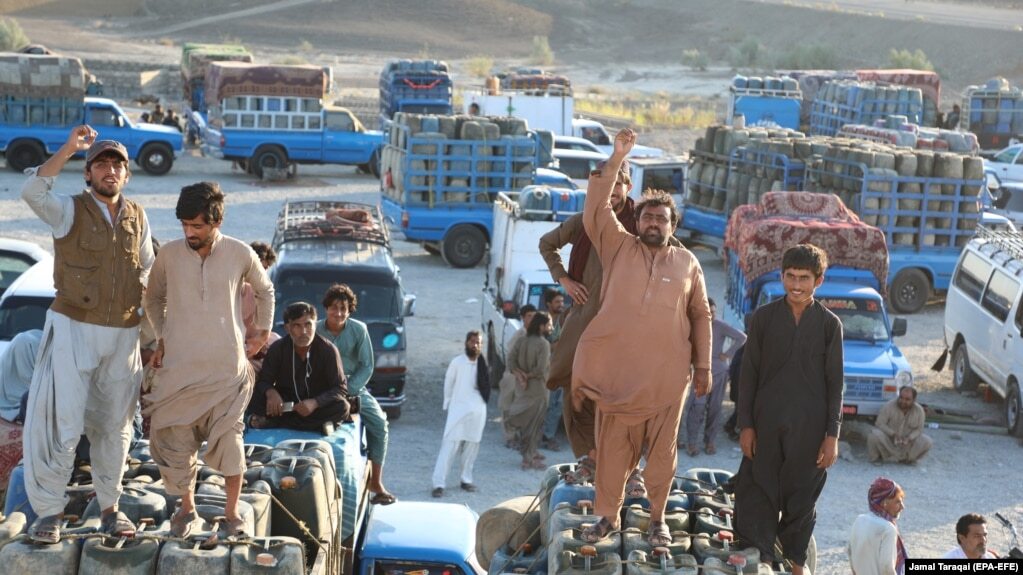 He couldn’t find employment with the government or any NGOs, and business opportunities are rare in Basima, where Sasoli lives. This rural area of the Washuk district, a sparsely populated arid region, is situated on Pakistan’s southern border with Iran.

“We have no other alternatives. People from the border areas must either traffic drugs or work as diesel smugglers,” he said of the choice he made to join the same line of work as many adults in Washuk: smuggling cheap fuel from neighboring Iran. “As long as the government fails to create other avenues, we will continue to be smugglers,” he said. “My father was a good smuggler. I am a diesel smuggler, and my child will be a smuggler, too.”

Sasoli says that in the absence of any real economic prospects, fuel smuggling is the only viable means of making a living. “If the government set up factories and industries here, nobody would risk crossing the dangerous border,” he said. “If there were other sources of income, our economy would improve, and fewer people would turn to smuggle.”

In Balochistan’s provincial capital, Quetta, Mureed Baloch, a Ph.D. student who requested he not be identified by his real name, ekes out a living by making occasional trips to the border to feed his extended family of 10.

The illegal trade is rife with dangers. Smugglers must either bribe or avoid border guards and law enforcement officials on both sides of the border. In the absence of good roads, treacherous mountain tracks often prove deadly for motorcyclists and drivers.

“Every month, I put my life at risk to visit the border to smuggle Iranian oil so that I can put food on my family’s table,” he said. “The government has always ignored Balochistan. Unlike Punjab, we do not have factories or other major sources of employment here,” he added, referring to Pakistan’s prosperous eastern province where most of the country’s industry and agriculture is concentrated.

“After I completed my Ph.D., I looked for employment opportunities at various universities and colleges, but I found nothing,” he said. “To feed my family and provide my siblings with an education, I took up this risky job.”

Fida Baloch says the lack of employment prospects after completing his master’s degree forced him to turn to smuggle fuel. “Our lands have dried up due to a lack of rain. So we took up this job where we risk our lives driving through granite mountains and shabby dirt roads,” he said. “All our journeys are miserable, and every moment is full of risk.”

Fida owns a single-cab pickup truck that he loads up with 10 to 12 drums of diesel across the border in southeastern Iran. The fuel is then delivered across Balochistan, including Karachi, Pakistan’s southern seaport city some 660 kilometers away from his hometown in Panjgur district, another Balochistan district on Iran’s border.

It is not clear how much Iranian fuel is smuggled into Pakistan, but a 2015 estimate suggested it could be some 700,000 liters daily. Last year, Iranian officials estimated up to 11 million liters of fuel is smuggled out of their oil-rich country each day.

Fida says smugglers take turns making the trip using some 500 pickup trucks. The journey takes about two weeks. “Thousands of drivers wait at different places along the border,” he said. “Some smugglers brave greater danger and cross the border, more so in the dead of winter when it’s harder to guard the border in the mountains.”

Sasoli, Fida, and Mureed are three of the thousands of Baluch men who often endanger their lives to smuggle petroleum products along the nearly 1,000 kilometers of porous desert borderlands between Pakistan and Iran. The prevalence showcases the desperation of the Baluch people, an ethnic group that forms the majority of the population in Balochistan Province and Iran’s southeastern Sistan and Baluchestan Province.

Pakistani officials say they want to eradicate the illegal trade through law enforcement and development projects in Balochistan. But unsuccessful efforts against the practice highlight the link between instability and underdevelopment in the vast, resource-rich region that has reeled from separatist violence, military crackdowns, and attacks by Islamist militants.

Naseer Kubdani, a journalist in Mashkhel, a border town in Washuk, says the scale of smuggling along the border with Iran is enormous. He says some 1,000 pickup trucks smuggle tens of thousands of liters of Iranian oil, primarily diesel, through Mashkhel daily.

“Almost 80 percent of the total population in Washuk relies on fuel smuggling as there are no other employment opportunities,” Kubdani noted. He says that with no infrastructure, trade, agriculture, or development schemes and low literacy, his district is one of the most underdeveloped regions in Pakistan. “This is why fuel smuggling has become the only source of livelihood for hundreds of thousands of families living in this region,” he added. “If this is banned, people will die of hunger.”

Mashkel is one of several border towns in Balochistan’s Makran and Rakhshan regions where local communities transcend the international border and share the benefits of an informal economy, which largely revolves around selling smuggled Iranian goods for profit in inflation-hit Pakistan.

Rafiq Chakar, a journalist in Panjgur, says the region has been a smuggling hub since the 1980s. He says the lack of economic alternatives today forces a majority of Panjgur’s estimated 316,000 residents to turn to smuggle.

“Fuel smuggling is the major transborder activity since 2001,” he said. “People from both sides depend on it.”

According to a 2019 report by the Balochistan provincial government and international aid groups, 71 percent of Balochistan’s estimated 12 million people live on less than $2 a day. Food insecurity and violence are major challenges in the region, which frequently suffers from earthquakes, droughts, and other natural disasters.

In the coastal region of Makran that comprises the Panjgur, Kech, and Gwadar districts, much of the smuggling occurs in Abdohi, a mountainous territory near the town of Mand. The most common item smuggled from Abdohi to the rest of Pakistan is Iranian petrol and diesel. Some of the Iranian fuel is also smuggled in small ferries from the Iranian city of Chahbahar to Gwadar, Pakistan’s new port city.

Hundreds of men and teenagers cross the border each day from Sistan and Baluchestan into Makran on motorbikes and pickup trucks selling 210-liter drums for up to $40, which fetches more than $100 in Pakistan. Baluch smugglers earn up to $150 in profit once or twice a month.

‘We Will Help Balochistan’

Officials in Islamabad and Tehran have condemned smuggling. Prime Minister Imran Khan ordered a crackdown against some 3,000 gas stations selling fuel smuggled from Iran, which Islamabad says costs it more than $900 million in revenues annually.

But the opposition in Balochistan is not happy with the prospect of a crackdown on fuel smuggling.

“I don’t consider it smuggling. It is a livelihood for those living along the border,” said lawmaker Mir Mohammad Hashim Notezai, a leader of the Balochistan National Party Mengal (BNP-M), an ethnonationalist group. “The state is responsible for providing employment to our people.”

Notezai warns of “all hell breaking loose” if Islamabad attempts to stop the practice through force. “Thousands of young people might engage in violent crimes if they are stopped from ferrying oil,” he said. “They will become a headache for the state.”

Abdul Hakeem, a smuggler, agrees. He says he sold his wife’s jewelry to buy a truck to carry oil and faces frequent peril when dodging Pakistani and Iranian border guards in Makran.

“It is not an ideal business,” he noted. “But we brave these dangers to earn some money to feed our families.”

In the absence of a transborder effort to bring prosperity to marginalized groups such as the Baluch community in Pakistan and Iran, smuggling is expected to flourish along the dangerous frontier between the two countries.