Bilawal calls for new water accord between provinces 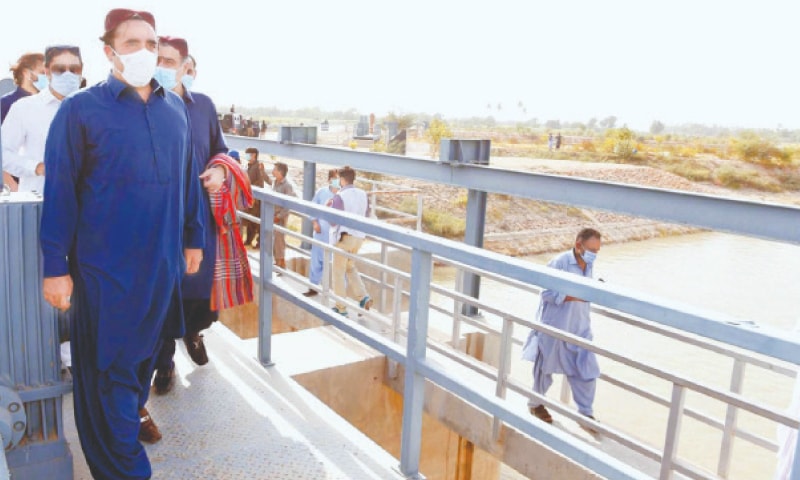 BADIN: Pakistan Peoples Party chairman Bilawal Bhutto-Zardari has stressed on the importance of a new agreement based on fair and equitable distribution of irrigation water and said that there should be no politics on water.

“The division of water should be with justice while the federal government has a lack of interest in solving the problems relating to Sindh,” he told a press conference in Phalkara, village of Bashir Ahmed Halepoto, Matli, district Badin on Wednesday evening.

He said the incumbent and previous federal governments were doing injustice by depriving the residents of lower riparian of their rightful share of water.

He said that the Water Accord of 1991 was strongly opposed by the PPP at that time, but now this agreement was not being implemented causing injustices again and again to the people of Sindh.

The PPP chief said even if a representative of Sindh spoke in the meeting of the Indus River System Authority (Irsa) he was attacked. “When we talk about the rights of Sindh and Balochistan, the federation launches a campaign against us.”

Mr Bhutto-Zardari pointed out that the Sindh government had completed plans to pave canals and ditches to ensure water supply to the end of irrigation canals and more than Rs7 billion was allocated for Badin district alone during the current financial year.

He hoped that the funds would solve the problems of the lining of canals and Left Bank Outfall Drain (LBOD).

He added that water theft in Sindh would not be tolerated.

‘PPP not accountable to Maryam Nawaz’

He said that the PTI would fight against the International Monetary Fund (IMF) inside and outside the parliament.

He said an economic policy in the country should not be made on the dictation of the IMF.

Responding to a question, he said: “Everyone knows that I tore up the show-cause notice and I have not changed my position yet. PPP is not accountable to Maryam Nawaz and not to Mian Sahib.”

He said Shehbaz Sharif was the leader of opposition in the National Assembly and the president of the Pakistan Muslim League-Nawaz (PML-N) and the PPP would engage with him for matters of national interest.

To another question, he said that he respected Jamiat Ulema-i-Islam chief Maulana Fazlur Rehman. “The PPP always practices principled politics and does not change its stance.”

Speaking on the issue of the attack on journalist and vlogger Asad Toor, he regretted that journalists were not safe even in the federal capital.

He said that the interior minister, who always gave lectures to the provinces, himself failed to protect a journalist in Islamabad. He said that an early action should be held in the matter.

The PPP chief said a journalists protection bill would be passed to ensure justice to journalists and added that he had directed Sindh Information Minister Nasir Shah to look into the problems of the media.

Replying to another question, he said that the federal government had repeatedly said that Sindh was not theirs. “The way [interior minister] Sheikh Rashid spoke about the people of Sindh some time ago is before everyone, to which the people also reacted,” he said.

Earlier, he offered condolences to the newly elected MPA Dada Mohammad Halepoto and Shehzad Halepoto in Phalkara village on the demise of Bashir Ahmed Halepoto.