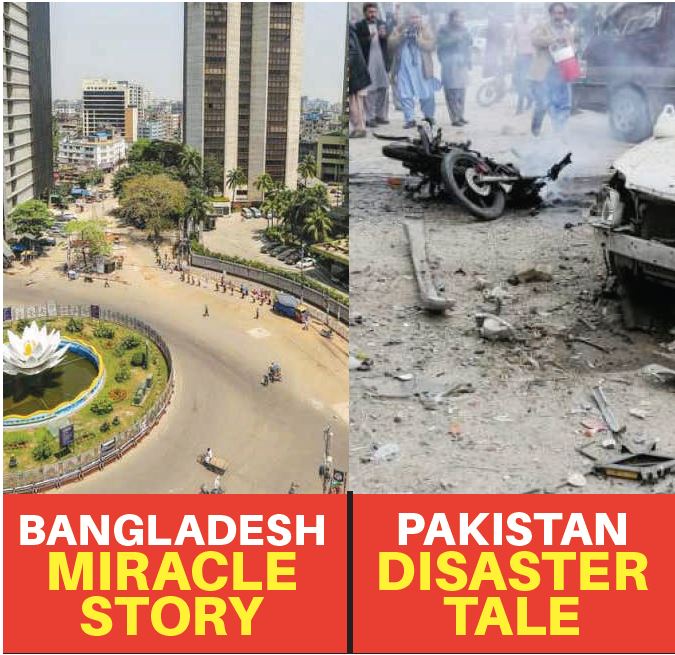 In May 2021, a write-up by Abid Hasan, a Pakistani who is a former adviser to the World Bank, made international headlines. It appeared in The News, a Pakistan publication. Hasan wrote: If Pakistan continues its dismal performance, it is in the realm of possibility that we could be seeking aid from Bangladesh in 2030. In 2021, Bangladesh celebrated 50 years of its independence from Pakistan. Bangladesh’s rise as an economic power and Pakistan’s downslide has been a matter for deep shame for discerning Pakistanis. Bangladesh came into being amidst deep distress cased by war and an acute famine. Pakistani soldiers had mercilessly mutilated the people living in its eastern flank, and Bangladeshis were dying of hunger and poverty. Dr Henry Kissinger, the National Security Adviser to then US President Richard Nixon, called Bangladesh a ‘basket with a hole’.

50 years later, Pakistan is leaking from so many holes that Pakistanis themselves have stopped counting. Read what Pakistani thinkers are writing in Pakistani newspapers: “Every government in Pakistan, including the current one, has gone around the world with a begging bowl. We are now drowning in debt.” It is easy to quickly read and slide over these words. It is difficult to pause and digest them. Pakistan has been begging for money from every nation that it can approach. The only nation to which Pakistan has not come with a begging bowl is India. No prizes for guessing why. Today, Pakistanis are writing with a sense of deep humiliation that the label of “basketcase” is stuck on Pakistan while Bangladesh is surging ahead. Examine what Bangladesh Prime Minister Sheikh Hasina confidently predicted a couple of years ago for 2021. Sheikh Hasina had predicted that by the time Bangladesh is 50, it shall defeat Pakistan in terms of all economic, human and social development indicators. Moonis Ahmar, former Dean Faculty of Social Sciences, University of Karachi wrote in The Express Tribune, Pakistan: Sheikh Hasina’s prediction several years ago has now come true mainly because of criminalisation of politics, corruption and nepotism in Pakistan.

Pakistan’s poor performance is our own fault, but our leaders conveniently blame our enemies and the IMF and World Bank. The deep hole that Pakistan is in is largely its own doing. While corruption and the economic impact of terrorism have a role in the mess, for the most part the poor performance is a result of pursuing irresponsible, inappropriate and unpredictable policies, and half-hearted reforms. The two most glaring examples of reckless policies were: excessive overspending by government, financed by domestic and foreign debt; and imports far exceeding exports leading to unsustainable external debt.

Time To Get Realistic

More and more Pakistan thinkers are warning that it is time for Pakistan to get sensible about what truly matters. “Surely it is time to get realistic. Shouting ‘Pakistan zindabad’ from the rooftops while obsequiously taking dictation from the Americans, Chinese, and Saudis has taken us nowhere.” These sobering words of caution are by Pervez Hoodbhoy, Pakistan’s noted nuclear physicist, in The Dawn. Why has Pakistan reached this stage? Prof Hoodbhoy reveals the reason. Pakistan continues to pamper its hyper-privileged ones without caring for the society or the economy. It has nurtured extremists since the 1990s without caring for its people or for human development.

Commenting on the development surprise called Bangladesh, an economic analyst wrote in Business Standard: In 1971, Pakistan was 70% richer than Pakistan; today, Bangladesh is 45% richer than Pakistan. Pakistani thinkers say it is painful to admit that their country is far behind Bangladesh. “It will hurt our national ego, but the only sure way for Pakistan to accelerate growth and reduce debt, and avoid seeking aid from Bangladesh, is to emulate Bangladesh,” noted Abid Hasan. Pakistani thinkers are stating the honest truth. Pakistan has gone downhill because of corrupt, incompetent and dishonest leadership. The ones most conscious of this truth are the Pakistanis themselves. “It seems as if those wielding power in Pakistan are least mindful about contributing for the betterment of the country. As a result, Pakistan continues to suffer from economic degradation, political instability, bad governance and societal breakdown. Merely securing military capability is not enough for a country to be recognised as a successful state particularly when its performance in terms of economic, human and social development indicators is deteriorating, ,” wrote Moonis Ahmar of the University of Karachi in The Express Tribune, Pakistan. All those who have studied Pakistan have come to the same conclusion. Former US Secretary of Defence Jim Mattis led the US forces into Afghanistan in the aftermath of the 9/11 attacks. He has a decade of experience of interacting with the military leadership in Pakistan. Mattis wrote in his book, “…the tragedy for Pakistani people is that they do not have leaders who care about their future.”

Pakistani thinkers can only write about the alarming situation in their country. They cannot do anything about it because they do not wield any power. Tasneem Ahmed Siddiqui, a social scientist of Pakistan wrote in The Dawn: “What is most worrying is Pakistan’s dismal performance in the social sector: 25 million children out of school (according to Alif Ailaan); continuing wide gender gap; poor quality of education and health; gaps in routine immunisation; the worst infant mortality rate in the world; rampant malnutrition and stunted growth in 40pc of the children. These issues do not bother either our political leaders or our intelligentsia.”

Is Pakistan Nothing More Than A Colony Of China?

One day, China will turn Pakistan into its own semi-colony as it did with Sri Lanka, notes leading global thinktank

Thinktanks and analysts globally are commenting that Pakistan has been reduced to be a colony of China.

Dr Michael Rubin, a former Pentagon official, noted in his write-up published by The National Interest, “Pakistanis will soon realise — if they have not already — what a devil’s bargain their country has made. In China, Pakistan has tied itself to a country that is responsible for the incarceration in concentration camps of one million Muslims solely on the basis of their religion and it has partnered with a country that thinks nothing about killing Pakistanis and humiliating Pakistan.” Rubin has darkly warned that China seeks not a partner but a colonial vassal in Pakistan, “…the deaths of whose citizens it sees as wholly irrelevant,” he writes. “Pakistanis may soon die en masse for China’s interests, and the Pakistani government may allow it to happen.” Panos Mourdoukoutas, an American economist and Professor and Chair of the Department of Economics at LIU Post in New York, has darkly predicted that China is doing the same to Pakistan that it did to Sri Lanka.

Mourdoukoutas has written for Forbes, one of the leading global think tanks that “One day, China will turn Pakistan into its own ‘semi-colony,’ as it did recently with Sri Lanka.” Mourdoukoutas observed: China has been nice to Pakistan, on the surface that is. It has been building the China Pakistan Economic Corridor (CPEC), which will connect Western China with the Indian Ocean, provided of course that India will allow it. That could certainly benefit Pakistan, helping the country make a big step forward, from an emerging to a mature economy, creating a lot of jobs in the process. But it could hurt Pakistan, too. Like adding to Pakistan’s corruption, which keeps pushing the costs of the project higher by the day, making Pakistan more indebted to China, which has been financing the project.” Mourdoukoutas noted that Pakistan’s rising indebtedness comes at a time when the country is already living beyond its means, as evidenced by persistent current account deficits, government debt, and external debt. It is considered impossible that Pakistan will be able to pay off the debts it has taken from China. Leading economists warn that we may see a replay in Pakistan of what China did to Sri Lanka. Beijing may convert these loans to equity with Pakistan too. In essence, this will convert Pakistan into a “semi-colony” for Beijing. “That’s what will eventually happen to Pakistan when China takes over CPEC, and end up collecting tolls from every vehicle that passes through,” is the dark prediction by Panos Mourdoukoutas for China Pakistan Economic Corridor.

In terms of economic and social development, Bangladesh clearly surpassed Pakistan in all the domains

In 2021, Syed Saif Ur Rehman Shah, a student of the College of Economics & Social Development, Institute of Business Management in Karachi published a study paper. The study paper is titled Pakistan & Bangladesh: Comparative Economic Analysis 1971-2020. Shah examined and conducted a comparative economic analysis of Pakistan and Bangladesh based on different economic indicators from 1971 to 2020. The findings of the study suggested that in terms of economic and social development, Bangladesh clearly surpassed Pakistan in all the domains. After studying the material published in various secondary sources, Shah found that Bangladesh’s progressive and consistent economic approach with emphasis on the economic empowerment of their population was the key towards its success. Leading economic analysts have called Bangladesh a “development surprise”. It is to be noted that each element of Bangladesh’s stupendous success is missing from Pakistan. One can examine this in the conclusion drawn by the study of Pakistan vis-à-vis Bangladesh.

The researcher specified that the objective of the study is to assess and comprehend the economic performance of both the countries in the last fifty years and determine which country outperformed in terms of economic growth and performance. After studying Pakistan’s account balance since 1971, the study came to the following analysis. “Despite receiving significant current transfers, Pakistan’s current account balance kept deteriorating which highlighted the fact and can be assumed that political instability, lack of accountability, failing to promote and revive domestic industries, and failing to become self-sufficient had contributed significantly towards the cause.”

Despite receiving significant current transfers, Pakistan’s current account balance kept deteriorating which highlights the fact that political instability, lack of accountability, failing to promote and revive domestic industries, and failure to become self-sufficient has cost Pakistan immensely in the past 50 years. In contrast, Bangladesh’s progressive economic approach, efforts towards economic empowerment and social development today are proved by their positive economic indicators.

To assess the performance in real terms, it is important to study and comprehend the economic growth rates and determine the change in the standard of living of the population through them.

Another Area Where Pakistan Lagged

It Did Not Educate Its Daughters

One of the major reasons for Bangladesh’s growth was their emphasis on social and women empowerment which had significantly contributed towards their labour force in all three economic sectors: Secondary, tertiary, and quaternary. As per The Economic Times, “Since 2008, the government has also vigorously promoted a policy of women’s empowerment, as a result of which a greater number of women have been making their way to professions, including civil services as well as armed and security forces. Women entrepreneurs are growing. Many young women are leaving their jobs as housemaids and joining readymade garment units, which they find satisfactory in terms of workplace security and wages, thanks to the attention given to the readymade garments sector”.

The study concluded that Bangladesh’s emphasis on the economic empowerment of their population played a contributing role towards the country’s growth and progress. In contrast, Pakistan’s economic growth and progress deteriorated because of inconsistent political regimes followed by inconsistent economic policies. Adding further, unlike Bangladesh, Pakistan failed to empower their population which added towards illiteracy and adversely affected the productivity and employment in the economy.