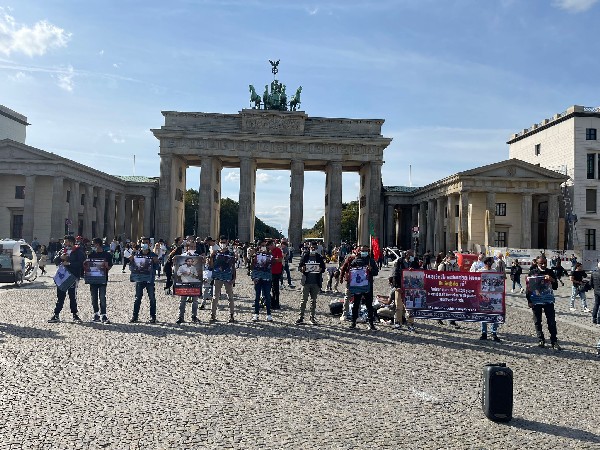 A demonstration against targeted killings and fake encounters in Balochistan was recently held in front of Berlin Gate in Germany.

The Baloch protesters were holding placards and banners and chanted slogans against inhumane atrocities in Pakistan’s resource-rich Balochistan.

During the demonstration, the speakers urged the international community to speak out against the killing of political activists in fake encounters by Pakistani forces in Balochistan.

BNM Germany Zone President Hamal Baloch said that the killing of political activists in fake encounters in the custody of Pakistani intelligence agencies for years is a continuation of Baloch genocide and if international human rights organizations remain silent on such atrocities a human tragedy could arise in Balochistan.

Asghar Ali Baloch, General Secretary, BNM Germany Zone, while addressing the program, said that in the last two months, 28 Baloch missing persons have been killed by the Pakistan Police, Counter-Terrorist Department in fake encounters. All of those killed in fake encounters were the victims of enforced disappearances by the intelligence agencies.

Asghar Baloch said that in the last two decades, the Pakistani occupation forces have inflicted a number of atrocities on Balochistan, ranging from enforced disappearances of people to imprisonment and inhumane punishments, and later throwing their mutilated bodies on the roadside or in inhabited places.

But the atrocities of Pakistan are not coming to a halt in the foreseeable future. On the contrary, the state is increasing its oppression day by day.

Asghar Baloch added that in the last two decades, the state of Pakistan has forcibly disappeared thousands of Baloch activists, who have been held in Pakistani torture cells without charge and are serving sentences for crimes that they never committed.

One of the examples is the case of Saddam Baloch. He was a member of the Baloch National Moment, who was forcibly disappeared by Pakistani forces from Karachi in April 2018 and has just been killed in a fake encounter.

Baloch Republican Party (BRP) member Fawaz Baloch slammed the CTD for killing missing persons in fake encounters and said that it was our national responsibility to stop any repression on Baloch and Balochistan.

And if we remain silent, Pakistan will not hesitate to use all kind of opperession to suppress the Baloch national movement. He said that we are here to expose Pakistani atrocities in Balochistan.