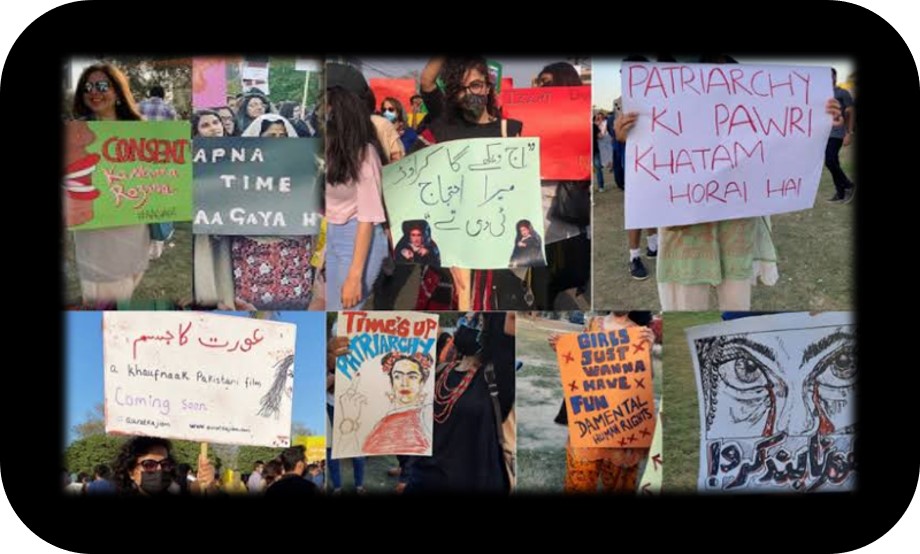 We slip into dreams either to escape harsh realities or to see the realisation of our desires. In dreams, we get into a state of trance where what we thought, desired, rooted for takes shape seemingly close to reality. The fructification of desires is instant but momentary. It fades and crashes when rammed by reality. Every year, March 8th is celebrated as International Women’s day. A day in the year when women across the world celebrate their very being in their very own manner. Social media platforms get flooded with messages, pictures, quotes, memes, and videos “celebrating” womanhood.

Celebrations where the other gender has neither the role nor the power to intrude. But celebration itself is subjective in both class and scale. Celebration is pronounced for women with entitlements but for those whose very existence is questioned, intruded, subjugated every nano-second it seems a utopian concept. Nine months after Taliban regained control of Afghanistan about 9 million people are on the brink of starvation. Economy is on the verge of collapse. Its citizens , especially in Kabul and other towns who enjoyed normal life with vistas of economic development opening up, are watching all the gains going down the drain. They are being stripped of their basic rights. The brutal Taliban regime brooks no dissent. Some daring ones are constantly threatened. They are forced to shift for their safety Leading a sort of revolt against Taliban, as protest against this brutal regime is not short of revolt, are females. And they are not deterred by Talibani threats . These educated , liberal, career oriented females know how banning education, segregation in classes or forcing a certain dress code works on the psychology of females which eventually denies them basic freedom.They are seeing before themselves their dreams crashing after Taliban banned education. They are staring at dark tunnel. A tunnel which is coming after travelling the highway of liberty and freedom.

The brutal Taliban regime doesn’t think twice at pointing guns at these women protesters or even whipping them in broad day light on the road. They are being constantly searched and hunted down. Taliban regime denies these reports,. It doesn’t even acknowledged these brutalities. But still doesn’t have the answer why are women being arrested? A news report cites Herat prison governor and his men implicated for the disappearance of the governor of women’s prison . It’s no surprise he denies his role. So where did the lady governor disappear? Does her disappearance matter to Taliban ? Taliban won’t even dare you to question them. Michelle Bachelet, High Commissioner of Human Rights, in her recent speech talked about women’s rights and liberties being constrained and demanded women be given opportunity to “completely engage” in public life.

She cited disturbing trend of enforced “disappearances” of activists and protestors. At the end of its current month-long session, the Geneva-based Human Rights Council, is expected to designate a special rapporteur on Afghanistan to investigate alleged violations by the Taliban and others. It’s not just the brutality of the of Taliban that is threatening lives. Ever since it took over the government economic conditions have wreaked havoc. People are even selling kidneys to earn money to feed families. According to a report it’s not just the men, even women too are selling body organs . But since the country is governed by Taliban and the seller is female so she will be paid less even for selling the same organs which reflects insanity . People are selling children mostly girls hoping they could at least survive with the buyer. In Bhadghis town girls as young as five for married into richer families A woman named Ghousia sold her 2-yr old girl because as she had no other option of earning to feed her family.

On International Women’s Day, the Taliban administration issued a statement declaring that they are committed to resolving the suffering of Afghan women. A brutal regime which has institutionalised gender discrimination and brutality against women, wished Afghan women on this day. It’s sounds so Kafkaesque. The present regime has a history of brutualities against women. It’s not diverted from it. Reading the history of brutalities of its first term from 1996 to 2001 very few were optimistic about change of heart among Talibanis despite their much acclaimed vows to respect women’s rights. Seven months since Taliban seized power, Afghan women’s long-held fears have come true. Most of girls’ secondary schools have been closed, barriers erected from pursuing higher education, co-education outlawed- calling it the “root of all evils in society” . It has outlawed music and the employment of female in local radio stations. It even abolished Ministry of Women’s Affairs, restricted their movement, barring them from leaving the country alone.

Now, by watching, noticing and reading what is being unfolded on Afghan females, do I have any reason to celebrate Women’s Day? Though, I come from well placed family and is decently well educated but seeing the tragedy not far off I don’t see any reason to celebrate it. It’s ironical that global reaction has been subdued. A “feminist foreign policy” is proudly claimed by a number of countries. However, the international response to these events is slow with little sign of a well-coordinated effort to protect Afghan women and girls’ rights. It seems international community is seemingly strengthening Taliban regime by sending all-male delegations there. Afghan women’s struggle is the struggle of every women across the world and need to be supported. This year the theme of Women’s Day theme is #BreakTheBias. It requires concerted effort to realise this theme. While the rest of the world is discussing methods to improve condition of women, Pakistani women are facing question whether to express their concern in public or not? Since 2018 on this day ‘Aurat March’ ( March of Women) is held . As its popularity and influence increased, so has the opposition against it. In 2020 , organiser had to approach the court to hold this march. The scale and popularity has unshackled Pakistan’s traditionally patriarchal society .

Women in large number participated the event held at Karachi’s ancient Frere Hall gardens who raise voice for inheritance rights, right to education, access to health care, fair salaries, unpaid labour, domestic abuse, the demand for safety at work and in public spaces, and other issues were highlighted through signs and speeches. In 2019 march, the slogan which created a sensation of sort was ‘Mera jism, meri marzi,’ . Its essence was twisted to suit patriarchal society but the attempts failed. Women defiantly continued to raise this slogan. Actress Mahira Khan, came out in its support of the march, explaining what the slogan meant on Facebook. Ladies wearing burqas, hijabs marched in unison with women wearing shalwar kameez. Some even not wearing dupattas. There were women dressed in saris, jeans and T-Shirts. It allowed participants to engage in dialogue and gain a better understanding of various viewpoints. It didn’t go well with the orthodox section whose idea of women are “weaker” gender who are to be “Owned” than being equal partner.

Last year a doctored video of march surfaced making it appear as if the participants had committed “blasphemy,” an allegation that can lead to vigilante killings in Pakistan. The storm cooled down only after Geo TV presenter Shahzaib Khanzada demonstrated how the video was manipulated. This year’s Aurat March demanded not only gender equality, but also economic justice, implementation of labour rights, provision of maternity leave and daycare centres, the promotion of an anti-war agenda, access to a fair judicial system, and the inclusion of women with disabilities and the transgender community, to name a few. I sense women of Pakistan are hell bent to drive patriarchy out of there lives.

It gives some reason for celebration. But it is part of the whole. The whole encompasses women of Afghanistan too. Hope the wheel of change rolls down Talibani regime which is not far off from the site of Aurat March.