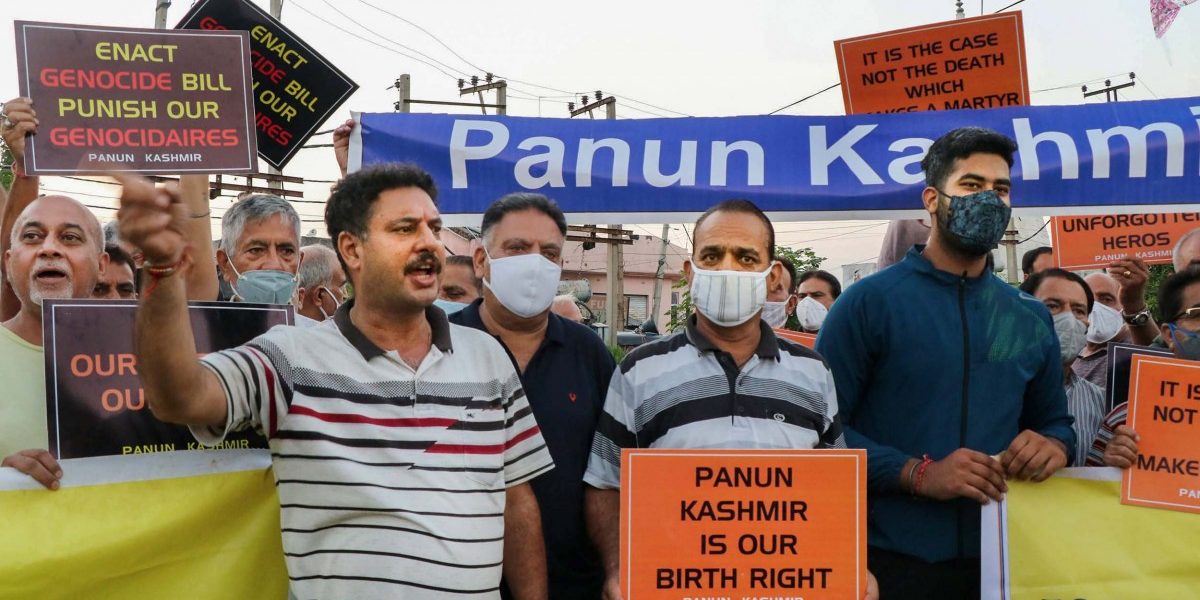 After the bone-chilling murder of Kashmir’s prominent chemist Makhan Lal Bindroo at his Iqbal Park pharmacy earlier this week, the terrorists struck at one of the most unlikely places in Srinagar – a government school at Eidgah in the heart of the city.

The most disturbing part about this school attack was not the audacity with which killers entered the busy premises in broad daylight. What shocked people the most was that two non-Muslim teachers including the female principal, Supinder Kour, were selectively targeted after the assailants first ascertained their religious identity. The bullets were not poured into Kashmir’s eternally lacerated body, but into its soul.

Target killings have been a favourite operational strategy of the militant groups in Kashmir to achieve short-term tactical goals. It was through the target killings in the 1990s that the militant insurgency mounted a powerful offensive against the social, political and intellectual assets of Kashmir. The killing of the first Kashmiri Pandit, Tika Lal Taploo, on September 14, 1989 culminated into the forced exodus of native Kashmiri Pandits from the Valley, creating a never-healing rupture in Kashmiri society.

On August 21, 1989, Mohammad Yusuf Halwai, a National Conference (NC) activist, became the first political worker to be assassinated in Srinagar. The spate of subsequent political killings led to the near-total extinction of the political mainstream from the Valley.

Similarly, the blowing up of Kashmir’s intellectual edifice began with the gruesome murder of Mushir-ul-Haq, vice-chancellor of the University of Kashmir on April 6, 1990. His death choked the intellectual spaces of Kashmir with lasting fear and silence.

But an important operational shift happened soon after the September 11, 2001 World Trade Centre attacks and the subsequent global ‘war on terror’. The Kashmir insurgency increasingly began to move away from targeting religious minorities and the guns became rather indifferent to an already muted and tamed intellectual class. The insurgents would rather focus their energies on the disruption of mainstream political activity and the killing of unprotected, pro-India political activists, most of them local Kashmiri Muslims. This was a strategic move to cleanse the Kashmir ‘movement’ from the taint of being an Islamist struggle for domination against a secular democracy, in a geopolitically sensitive region.

The recent target killings must therefore be seen as a conscious return by militant groups towards the original categories of wajib-ul-qatal – the people who must be ‘killed for the cause’, the way it used to be at the onset of insurgency in 1989. A statement released by the group claiming responsibility for the Srinagar attack mentioned ‘traitors’, ‘collaborators’ and ‘stooges’ as the broad categories of enemies who were the next to be killed in Srinagar. The statement also makes scant references to the charges against those killed which include collaboration with the Indian security forces, acquiring domicile certificates and participating in August 15 celebrations, and even question the character and morals of the deceased.

However, it is public knowledge that in the post-370 Kashmir, this rhetoric of collaboration is mainly directed at the native minorities and the non-Kashmiri residents like the recently killed gol gappa-wala Virendra Paswan, besides the forever hated pro-India activists. The fears of a forced demographic change are being intelligently deployed by the terror groups to seek tacit public validation of the acts of violence against anyone who seeks to endorse the status quo.

In season 5 of the Netflix show Money Heist, Professor, the mastermind of the theft at the Royal Mint of Spain, in his conversations with Inspector Raquel Murillo, constantly keeps talking about the public opinion. While the heist is on, the Professor doesn’t want to harm any of the hostages fearing that the loss of public support will hurt their larger objective of loot.

In the Kashmir insurgency likewise, public perception has been a deciding factor for the direction in which the scales of violence can swing. The speech in which Brutus justified Caesar’s murder and got Romans rallying behind him is the kind of speech that has been constantly used in Kashmir to justify the cold-blooded murder of non-combatants, and that idiom in today’s Kashmir is admittedly once again communal. That is what the most worrying.

At this crucial juncture, thus, this unconscious participation in the murder most foul is something that Kashmiri Muslims must vehemently guard against.

Our biggest challenge this time is how do we, as a demographic majority, withdraw the tacit and presumed consent from the terror groups that they can kill innocent people on our behalf and in our name? At a deeper level, it has also become a question of agency. The armed groups, by defining the ‘Other’ for us, are actually redefining what constitutes ‘us’. And not only that, these terror groups are then eliminating the ‘Other’ to safeguard our political interests, which makes us unwillingly complicit in this crime.

It may sound rather rhetorical, but Kashmir as a historical, political and cultural entity cannot be imagined without its diversity. Despite a heavily contested past, Kashmir has remained by and large a melting pot of faiths, languages and traditions. No doubt that in the last 30 years, a protracted insurgency has damaged social relations and atomised the society at multiple levels. Thousands of lives were lost and an entire community lost their hearth and home. In 2021 alone, out of 27 civilian killings, 21 were local Kashmiri Muslims. But even then, Kashmir has never endorsed violence against minorities and the scars and remorse associated with the Kashmiri Pandit exodus, which happened under the eyes of their equally helpless Muslim neighbours, are far from over.

In such a situation, at this moment, the onus for giving a sense of security to Kashmir’s beleaguered minorities is squarely on the shoulders of Kashmir’s majority population. There is no Jagmohan around this time. There are no contradictory facts like those in 1990s because this time Kashmir is witnessing a mayhem under the glare of social media and every incident is being reported from every possible angle. We also have the benefit of hindsight. But if today also, even one Kashmiri Hindu or Sikh or any non-Kashmiri person is hunted out of Kashmir, and we don’t come out on the side of the victims, then the history won’t forgive us.

Governments can’t put a soldier with every individual for protection. History of civil wars tells us that it is neither the UN, nor the militias nor the state apparatus that finally decides the possibilities for peace. It is the will to peaceful existence of all groups that assures enduring peace.